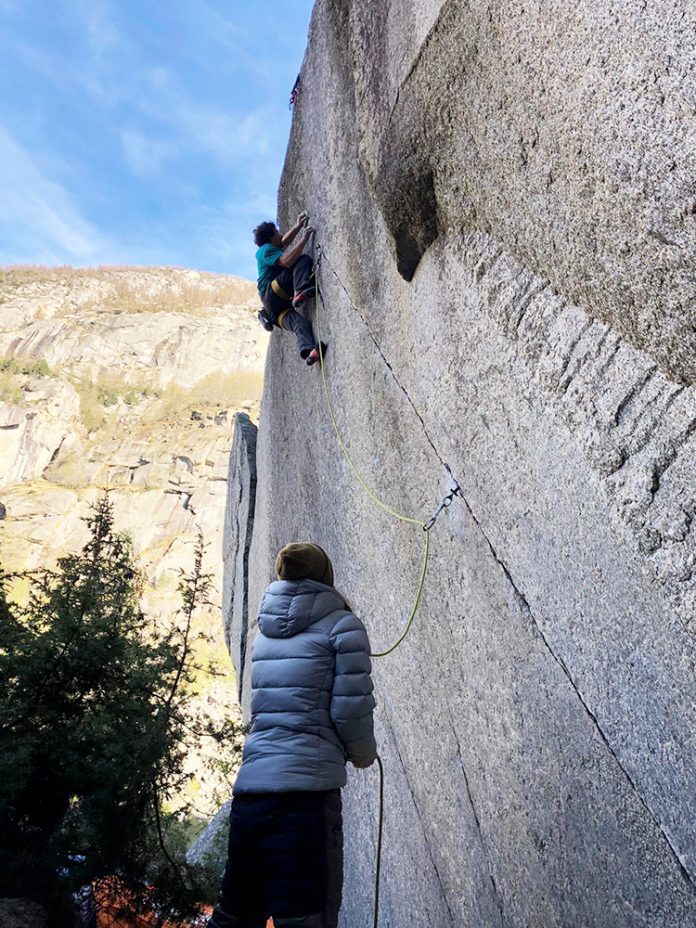 During a quick visit to Piedmont, Italy, Jacopo Larcher completed two important first repeats on the rough granite of Valle dell’Orco: the multi-pitch Angels and Demons on the Caporal with Barbara Zangerl and the highball Grenzenlos.

Jacopo Larcher and Barbara Zangerl travelled to Noasca in NE Italy to shoot a film with Austrian boulderer Bernd Zangerl, but between one take and the next they completed two interesting ascents, almost by chance. The pair headed straight for the most famous cliff in the valley, the Caporal, with their sights set on the multi-pitch Angels and Demons. Started in 2005 by Ezio Marlier and Massimo Farina and completed by Federica Mingolla and Leo Gezza in 2020, this 200m line was freed with difficulties up to 8a+ by Mingolla and Simone Papalia in November 2020.

Adopting in their usual style – both leading the difficult pitches and swinging leads on the easy pitches – Larcher and Zangerl claimed the first repeat, commenting afterwards that climbing the line free was a considerable challenge. “The route is beautiful, congratulations to the first ascensionists for completing it in that style” Larcher told planetmountain.com

Prior to the repeat, Zangerl had tried the starting pitches with Bernd Zangerl, while Larcher managed to flash the crux pitch and send the other hard pitches on his second attempt.

Changing terrain completely, Larcher then headed down to Masso degli Orchi to try the ferocious thin crack attempted years ago by Marzio Nardi and Mauro Calibani and originally called I Ragazzi del Nuovo Pomeriggio, then renamed Grenzenlos by Bernd Zangerl who made the first ascent at the end of October 2020.

Back then it was Larcher himself who spotted Zangerl and now, after two quick afternoons of trying the moves alone, Larcher also sent this intriguing highball. “I was immediately struck by the line when I took pictures of Bernd last autumn” Larcher said “I’m definitely happy to have climbed it now as well. It was certainly unexpected.”

While there are no indications as to the technical difficulties – but it’s clear it’s significantly harder than 8A boulder – the psychological difficulties are considerable seeing that the upper section of the sequence is “protected” by only a pecker wedged into the thin crack.