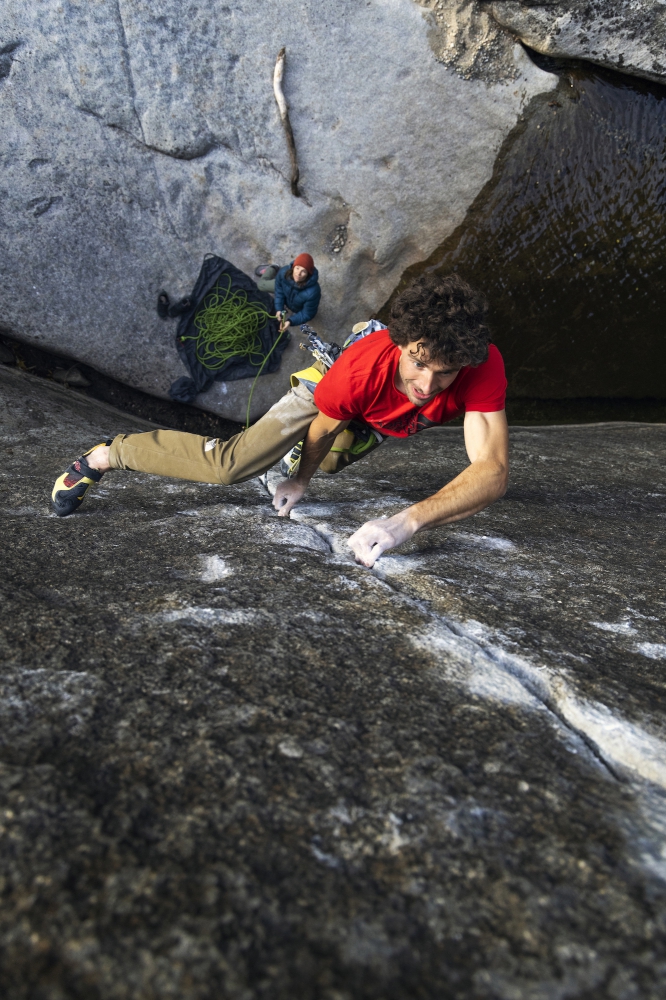 On 22/11/2022, Italian climber Jacopo Larcher successfully made the 3rd ascent of the iconic trad test-piece Meltdown in Yosemite Valley, USA.

Meltdown was first established by Yosemite local Beth Rodden in 2008, and gained notoriety in the film Dosage V, from Big Up Productions. Beth graded the route 5.14c, putting it out there as one of the hardest trad climbs in America, and worldwide. The route then stood unrepeated for a decade, before finally seeing its second ascent from Carlo Traversi in 2018.

Larcher first tried the route in 2016, when he spent 2 days trying the moves. During this current trip, he spent one evening brushing the holds and 7 days working the route on head-point. During his ascent he obviously placed all gear on lead. The South Tyrolean climber is spending the month of November in Yosemite, filming for a new documentary series by The North Face about the world’s hardest trad climbs. ‘How Hard Is Hard?’ is due out in 2023.

On his ascent of Meltdown, Larcher commented: “There are many hard trad climbs around the world, but very few have become iconic. For me Meltdown was definitely one of those. I don’t know why, but it somehow had this mysterious aura. I remember watching the movie of Beth’s incredible first ascent, back in 2008; at the time I didn’t know much about trad climbing, and I couldn’t really understand the significance of the route and her achievement at that time. The route just looked so beautiful, yet completely desperate to me. Something unthinkable for me to consider climbing, at the time.

Some years later, when I started to get more and more into this aspect of climbing, I began to realize that her achievement was ahead of its time. Since he rfirst ascent, not much about the route had been heard, which was not so common for a well-known climb situated just in the middle of Yosemite valley.

There were rumours about some of the world’s best trad climbers having tried the route over the years, but no-one found success. People even created the myth that route had such thin jams, that it was impossible for climbers with normal fingers. All that added some mystery to the route, until Carlo Traversi, in 2018, finally claimed the second ascent of Meltdown, confirming Beth’s incredible achievement and proving all the “excuses” were wrong.

I had my first taste of Meltdown in 2016, when Babsi and I checked out the route for two days in between some “El Cap action”. We were both surprised by the beauty of the line, as well as its difficulty. It definitely wasn’t about thin finger jams, but about some very powerful lay-backing on extremely bad and glassy footholds. After those 2 days I was even more impressed by Beth ascent back in 2008!

We regularly visited Yosemite in the following years, but our focus had always been on the bigger walls, so we hadn’t gone back on Meltdown, even though the line has always been in the back of my mind.

As I’m currently working on a documentary about the different styles and ethics in trad climbing, this season I finally committed to go back to the Valley without my big wall gear, in order to climb some classic single pitches and to get on Meltdown again.
Luckily, this time I immediately had some more positive feelings woking on it. The footholds were still terrible and the route hard, but I somehow felt like a more mature (trad) climber. I was very surprised yet motivated, when I managed to top-rope it clean on my 3rd day trying it this year. After that, I naively thought it would go fast on lead, but placing the gear adds some extra spice to it and it definitely makes the route significantly harder.

On my fourth day of lead tries I had to pull out a big (!) fight and dig deep in order to reach the anchor. The easier upper parts always felt good on top-rope, but it definitely felt different when coming from the ground! Usually, while head pointing hard trad routes, the actual send go feels smooth, which is obviously a nice feeling… but on this one I had to fight very hard and was very close to falling in the upper part, which somehow made the experience even more unforgettable 😉 It was definitely one of my favourite moments in climbing!

I would like to highlight once more what Beth did in 2008, which was way ahead of the times, both in women and mens climbing history! I honestly believe the shorter you are, the harder this route gets…and yes: fingers size doesn’t matter! Chapeau Beth, thanks for the inspiration.”

How you can Keep Heat—and Keep Out Longer—this Winter

Snug RV Tenting within the Desert with the Black Sequence HQ21

Ask an Professional – Have fun Park and Recreation Month by...

Excited about buying and selling choices or inventory in Godaddy, NVIDIA,...

The Greatest Campground in Each State