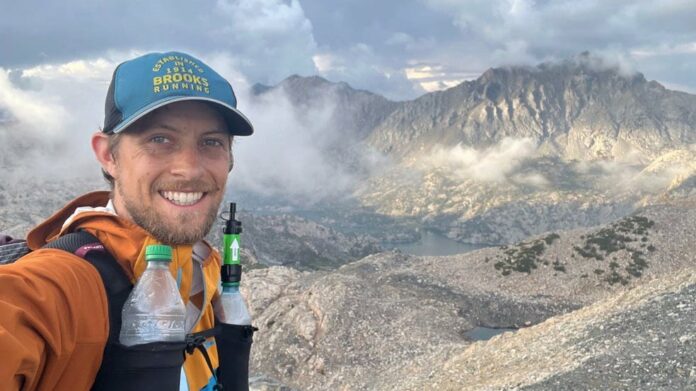 McConaughy—an accomplished ultramarathon runner and holder of several records on long trails—says this FKT stands out among his other accomplishments.

“I think this FKT is awesome, because I just love the trail,” McConaughy says. “It’s so much fun. I had a blast going out there and going after the time. The times are so competitive, and this is probably one of the highest profile FKTs I’ve done.”

The JMT was originally called Nüümü Poyo, “The Peoples’ Trail,” by the Paiute, Shoshone, and other tribes that used the pathway for centuries. Today, many runners and hikers prefer the name Nüümü Poyo to honor and acknowledge the land’s original stewards and trail users over John Muir, who was an advocate for Indigenous removal from the area.

The JMT stretches from Yosemite National Park to 14,505-foot Mount Whitney, known as Tumanguya to its original inhabitants, and is popular with trail runners and through-hikers alike.

Buzz Burrell, cofounder of FastestKnownTime.com (which is owned by Outside’s parent company Outside Inc.) called McConaughy one of the best multi-day runners.

“This FKT will allow people to recognize him,” Burrell said. “​​The John Muir Trail is unquestionably one of the best long trails in the world, so to do this trail at any speed is totally worth it,” says Buzz Burrell, cofounder of FastestKnownTime.com. “The JMT is also one of the most competitive FKTs in the world—its leader board a who’s-who in the ultra world—so to lower the unsupported record by almost three hours is terrific, noting also that this is the second fastest time ever, in any style.”

The JMT has attracted many top-tier runners and hikers, from FKT founders Buzz Burrell and Peter Bakwin, to mountain runners Darcy Piceu and Francois D’Haene (who hold the current female and male supported FKTs, respectively, south-to-north).

McConaughy tackled the route from north to south, although FKTs have traditionally been done in the opposite direction to minimize elevation gain (north-to-south boasts 4,000 additional feet of climbing). His effort also bested the previous overall unsupported FKT, which was done south-to-north. The north-to-south route places Mt. Whitney near the end of the route, a major challenge on an already tough route.

“While many folks who hike the route want to get Whitney out of the way, I was excited by those really long climbs,” says McConaughy. “You’re saving the biggest and most badass for last.”

McConaughy first became interested in the JMT in 2014, when a little-known app developer named Andrew Bentz set an alluringly fast time on the route using a fastpacking style (as opposed to running). McConaghy says he is more of a runner, though the routes he’s tackled have historically been very long. McConaughy currently holds FKTs on the 800-plus-mile Arizona Trail (supported), 272-mile Long Trail (self-supported), and the Appalachian Trail (self-supported).

“I am really interested in multi-day efforts. You have to really have your nutrition dialed in. And sleep becomes part of the strategy. For me, ultramarathons get interesting when you’re out there for one, two, three….four-plus days,” says McConaughy.

McConaughy used his win at this year’s Cocodona 250 ultramarathon as a springboard into his training block for the JMT. Much of his summer has been spent working as a backpacking guide, logging long, slow days on feet.

“I had a kind of quirky theory that the backpacking would be helpful, even though it’s slower. I was really curious about how these long, 12-15 hour days might do for this effort,” McConaughy says. “I got used to being in the altitude of the Sierras, the sun, and getting my body used to moving all day instead of at home, on the couch, recovering. And I wasn’t sleeping much.”

McConaughy’s demanding guiding gig, combined with needing to watch for emerging smoke and fire conditions in the area, that could have made the attempt unsafe,  made for a nerve-wracking lead-up. But, the conditions aligned for McConaughy’s attempt.

For three days, McConaughy hiked and ran the PCT. He ate 300 calories an hour (as much as possible) but struggled with sleep deprivation earlier on than he was used to, and worked in a two-hour nap.

“I would have been running on fumes if I kept going like that,” McConaughy says.

By the third night, McConaughy was hallucinating.

“In my head, there was a committee of people,” McConaughy says. “One voice would push me to run faster on the flats. Another voice would say, remember, you need to eat food. I haven’t experienced hallucinations like that before! It definitely got a little weird out there.”

After an hour-long nap, McConaghy was refreshed and ready to take on the crux climb up Mt. Whitney.

The sensitive ecosystems around Mt. Whitney require visitors use wag bags to dispose of their human waste. Less than an hour away from the finish and negotiating his way down a challenging descent, McConaughy found himself in the position of a fierce inner debate on using a wag bag, or taking his chances and running it in.

“I was thinking to myself: the only thing that could make this worse was having to stop for a poop break. I only have to go another six miles! Then, sure enough, five minutes later, I had to pull off to the side of the trail and get very creative. You gotta do what you gotta do,” McConaughy says. Despite his eventful descent, McConaughy made it to the finish.

“Mt. Whitney has to be the coolest finish of all time,” says McConaughy. “But I was definitely having a pity party on the way up. I was hiking at a pretty leisurely pace, and even got passed by a couple of hikers.” When McConaughy realized that if he cranked the downhill to the Whitney Portal he could put a serious gap on the FKT, he started to hammer.

“It was a peak experience for a lot of reasons,” McConaughy says.

McConaughy hints that his love affair with the JMT might not be over.

“I still feel like there’s a little bit of juice left to squeeze out there if I can get everything to go the right way. But overall, I’m really proud of my effort out there,” he says.

Altitude illness, storm might have led to loss of life of...

USACE waives day use charges at recreation areas in observance of...

the 5 greatest crags for Dolorock 2021

Alaska’s Out of doors Financial system to Obtain Almost $57 Million...