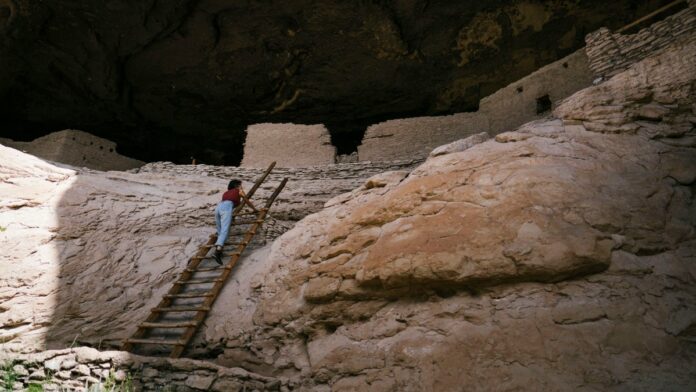 Venture into some of the most pristine backcountry in the United States while experiencing a rich cultural heritage and thousands of years of human history. From cliff dwellings and petroglyphs to caverns and mineral hot springs, you’ll find some of the best access to outdoor recreation in North America interwoven with some of the continent’s oldest towns and villages.

Here are some special outdoor and cultural experiences that deserve a place on your New Mexico must-see list.

​​1. Sled Down the Dunes of White Sands National Park (and Walk in the Footsteps of Early Humans)

The white gypsum dune fields of White Sands National Park create an absolutely surreal landscape. At dusk, the sky can turn otherworldly shades of pink and purple, blending seamlessly with the rolling white dunes to create a living watercolor painting. The region also has quite a storied history. Long before the dunes existed, Paleo-Indian nomadic hunters came here in search of camels, bison, and mammoths. Today the park contains the world’s largest collection of fossilized human footprints.

If you’re looking for an adventure in pursuit of hard-earned relaxation, string together a self-guided hot-spring tour that takes you through some of the state’s most striking landscapes. Start with a challenge by hiking to Spence Hot Springs, just outside the town of Jemez. Before you hit the road again, be sure to visit the Jemez Historic Site, where you can tour the 16th-century Gíusewa Pueblo and a Spanish colonial mission.

Farther south, ease into natural springs in and near the remote Gila Wilderness. At the Gila Hot Springs Campground, mineral water bubbles to the surface at temps up to 157 degrees and cools to the perfect soaking temperatures by the time it reaches the three soaking pools. You can soak in them day or night for $10 per person.

To the east, in Truth or Consequences, choose among a handful of historic and unique spas like Riverbend Hot Springs, where you can soak right alongside the Rio Grande.

When you’re ready to head north, end your journey at the wonderfully remote Ojo Caliente, whose legendary healing waters have been soothing minds, bodies, and spirits for thousands of years. A short hike from the property will take you to the site of Posi Ouinge, an ancestral Tewa pueblo dating back to the 13th century. The pueblo may have had over 2,000 rooms and would have been one of the largest structures of its kind in the Southwest when it was in use.

Bandelier National Monument is home to well-preserved cave dwellings carved by the Ancestral Puebloan people of northern New Mexico. While the dwellings are a short and easy day hike from the visitor center, the lesser known backcountry offers a bigger challenge and the reward of more solitude. First, stop by the visitor center to learn about the history and culture of the Ancestral Puebloan people and the guidelines for respectfully visiting areas where you may come across artifacts along the trail. Then head out on a strenuous 12-to-16-mile hike to Yapashi Pueblo, once a major village with hundreds of rooms. For an overnight trip, take the 22-mile Painted Cave trail, which features a pictograph panel.

It’s easy to see why New Mexico’s scenery has inspired artists both past and present. Raft the Rio Chama through the same canyon country that appears in numerous works on a three-day trip with Far Flung Adventures. The float starts at the El Vado Reservoir and follows 31 miles of the Wild and Scenic Rio Chama before finishing near the artisan town of Abiquiu.

5. Send a Postcard from the Center of the Earth

OK, maybe it’s not the center of the earth, but you can actually send snail mail from more than 700 feet underground when you hike into the caves at Carlsbad Caverns National Park. The caverns were designated a national monument in 1923, and within a few years a lunchroom and souvenir vendors were catering to the tourists who wended their way down to the park’s main attraction—the 250-foot-tall limestone Big Room. Today the park is far more conscious about the impact tourists can have on the cave’s ecosystem, so concession operations in the cave are a bit more tame. But you can still hike into the cave down a long set of switchbacks, or take an elevator to the Underground Lunchroom (now a snack bar) where you can drop a postcard into the active mailbox. The postmark will let your recipient know the card—certainly one of the National Park System’s most distinctive souvenirs—was mailed from deep within the earth.

Chaco Canyon is one of the most important cultural sites in the United States. Over a thousand years ago, this special place served as the economic center of the San Juan Basin. Many of the stone structures built as early as the year 800 still stand. Today visitors to Chaco Culture National Historical Park can enjoy crystal-clear views of the night sky, just as the Chacoans did as they interpreted the constellations. The park is a certified International Dark Sky Park, free from light pollution. Park rangers offer regular archaeoastronomy programs that explain the ways the Chacoan people wove astronomy into their culture and architecture. During daylight hours, stop by the visitor center for a backcountry hiking permit to trek along routes to impressive Chacoan great houses.

Tip: For a real treat, visit during an equinox or solstice. During the autumnal equinox, for example, the sun rises in alignment with Casa Rinconada, a grand kiva.

7. Take a Scenic Train Through the Rockies on North America’s Highest Steam Railroad

Venture to the town of Chama to cross the 10,015-foot Cumbres Pass on North America’s highest steam railroad — an accessible way to view pristine backcountry landscapes. A National Historic Landmark, the Cumbres and Toltec Scenic Railroad was built in 1880, and its steam-powered train still operates very much the original way, slowly meandering back and forth across a 64-mile stretch of New Mexico’s border with Colorado. The journey takes over six hours, so you can fully immerse yourself in the scenery. Along the way, you’ll take a steep climb out of the Chama Valley, travel through the Toltec Gorge, and cross a 137-foot-high trestle bridge. Keep an eye out for bears, elk, hawks, and other birds.

Tip: Show up hungry. The railroad brought back its historic on-board lunch menu, including classic New Mexican enchiladas, so you can get a taste of local culinary culture.

8. Eat Your Way Through the Green Chile Trail

New Mexico’s food culture is unlike any other. Case in point: even McDonald’s has green chile cheeseburgers on the menu here—something you won’t find outside the state. But burgers are just the start. Set up an adventure base camp in Las Cruces—a perfect gateway city for trips into the Gila Wilderness, White Sands National Park, Elephant Butte Lake, and more—and fuel your days of adventure with meals along the Green Chile Trail. This string of restaurants around the area gets truly creative: the Double Eagle has green chile cheese wontons with pineapple jalapeño salsa; Caliche’s Frozen Custard has green chile sundaes; and at D.H. Lescombes Winery & Bistro, you can sip a glass of fire-roasted Hatch green chile wine. Traveling solo? Check out the Bike and Chowder Club, an open group for cyclists who want to ride together and share tales over good food in Las Cruces.

Built upon the idea that New Mexico is “adventure steeped in culture,” the New Mexico True brand advertising campaign provides a platform for unified messaging for more than 50 communities and 450 businesses around the state.

KeyVice Carabiner Evaluate – Is it price $50?

Easy methods to OPEN A BOTTLE