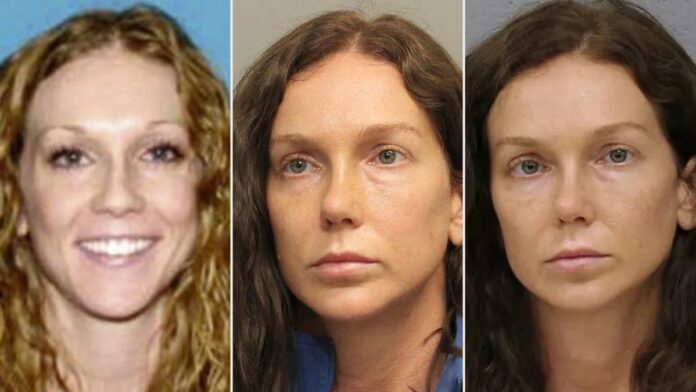 Kaitlin Armstrong has been officially charged with the first-degree murder of professional cyclist Moriah Wilson.

Armstrong, 34, was apprehended in Costa Rica on June 29 after spending 43 days on the run. A warrant was issued for her arrest on May 17, six days after Wilson, 25, was found shot to death in Austin, Texas.

On Tuesday, Armstrong was booked into the Travis County jail after transfer from another facility in Houston.

According to NBC station KXAN, jail records show that Armstrong has been charged with an “unnamed first-degree felony charge and a class B misdemeanor charge for theft of service equal to or greater than $100 and less than $750.”

A press release from the city of Austin Police Department states that Armstrong is currently being held with a $3.5 million bond for murder. The bond for Theft of Service is $3,500.

According to Brandon Filla, Deputy U.S. Marshal, Armstrong used someone else’s passport to travel from Newark, New Jersey to Costa Rica on May 18. Before her capture, Armstrong had been spotted at Newark’s Liberty Airport that day, but her name was not found on any outgoing flight manifests.

Filla would not reveal the owner of the passport, citing the ongoing investigation, but did say that it was the actual passport of someone who looked very similar to Armstrong.

“That passport was a passport that was issued to someone else that was in very close physical description … that she used because she looked very similar to that individual,” Filla said in the press conference. “So that was a fraudulent use of it, but it wasn’t fraudulent in itself because it was issued to a certain individual.”

According to a report on Inside Edition, two passports were found in a locker at the hotel in Costa Rica where Armstrong was apprehended: Armstrong’s own and one belonging to her sister, Christine.

Austin police issued a warrant for Armstrong’s arrest on May 17, the day before she flew to Costa Rica. Prior to the May 18 flight, Armstrong was seen on surveillance video at Austin-Bergstrom International Airport on May 14, where she boarded a plane to Houston and then got on a connecting flight to New York’s LaGuardia airport.

During the press conference, Filla also stated that Armstrong had significantly changed her physical appearance, “cutting her hair to shoulder length and dying it to a darker brown color.”

Filla also said that he was told Armstrong had a bandage “over her nose area where she had claimed she had gotten into a surf accident recently.” According to Inside Edition, a $6,350 receipt for cosmetic surgery under another name was found in the locker with the two passports.

Filla said that Armstrong had been frequenting yoga studios in the area and taking classes at them “to better her profession to teach a specific type of yoga.”

“She was getting really ready to establish that next part of her career,” he added.

Armstrong’s apprehension and arrest marks the end of one chapter of the tragic death of Wilson, a rising star in the U.S. off-road endurance scene. Wilson was found dead at a friend’s house in Austin the evening of May 11 after traveling to Texas for a gravel race. Armstrong’s car was seen at the site of the crime that evening, and when she was brought in for questioning the following day, she didn’t deny the evidence.

A police affidavit later revealed that pro cyclist Colin Strickland spent the evening with Wilson at a swimming pool in Austin before her death. The affidavit also said that Armstrong was Strickland’s partner and had previously expressed intense jealousy of Wilson. Handguns at the Armstrong/Strickland household matched forensic evidence from the crime scene.

Pretend ‘No Tenting’ indicators use State of Oregon Protected Routes to...

Hainan is changing into the tremendous venue for sporting trade

Out of doors Health Park opens in Downtown Fort Wayne

Why climbing hospitalization numbers amid omicron surge could also be extra...