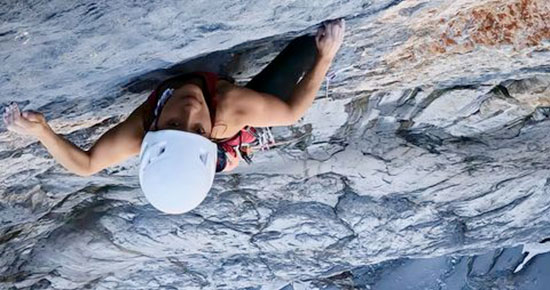 Swiss climbers Katherine Choong and Jim Zimmermann have both repeated Hattori Hanzo, the seven pitch 8b+ on the North Face of Titlis above Engelberg in Switzerland, first ascended by Matthias Trottmann.

Katherine Choong and Jim Zimmermann are on a roll and after repeating La Ramirole (150m, 8b) in France’s Verdon Gorge, the Swiss couple have now bagged another hard multi-pitch alpine sport climb, namely Hattori Hanzo on the towering North Face of Titlis above the village of Engelberg. Bolted by Matthias Trottmann in 2012 and freed by the Swissman on 16 August 2013, the route provides a psychologically demanding, at times run-out start before packing a punch with its 8b+ crux pitch followed by a testing 8a+.

The pair first attempted the route in 2021 after repeating Trottmann’s 6.4 Sekunden on the other side of the valley but despite their best efforts were forced to retreat. They returned this June and worked the pitches over various weekends, before making a no-falls ascent on 17/07/2022. Choong led all the pitches to complete the first female ascent, while Zimmermann led the two hardest pitches.

After her successful ascent, Choong explained “After 6.4 Sekunden, the multi-pitch route I climbed last year, Hattori Hanzo was the next logical step, a route also bolted by Matthias Trottmann. It took him 6 years to bolt this route on the impressive Titlis north face and one year of working the line before sending it in 2013. The name refers to a Ninja warrior and the long struggle to reach his goal. I can imagine that it was a massiv effort to establish such a route and make the first ascent, I have a lot of respect for his work and performance! After a long 2.30 walk, the route starts with 4 vertical slabs pitches which on paper are graded “easy”. Only one bolt in the first pitch (and hard to protect with camalot), not much more in the following ones, very small holds, the approach however is quite tough mentally, even before you arrive at the start of the crux pitches which follow their way through the long, impressive overhang.”

Due to its long approach, run-out climbing and overall difficulties, Hattori Hanzo has not had too many repeats to date. Other ascensionists include Jernej Kruder, Gregor Vezonik, David Firnenburg and Moritz Wallenberg.

Colorado Out of doors Recreation Business Workplace to Host Assembly in...