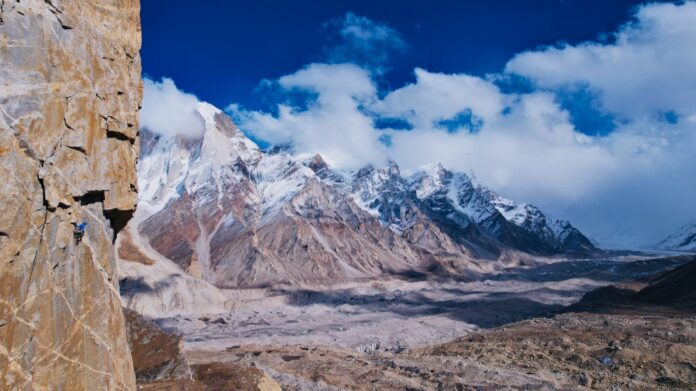 In October 2022 Swiss alpinists Jonas Schild, Andy Schnarf, Stephan Siegrist made the first ascent of ‘Between two Parties’ (350m, 7b/A3) in the Garhwal Himalaya of India.

In October 2022 the Swiss alpinists Jonas Schild, Andy Schnarf and Stephan Siegrist succeeded in making the first ascent of the hitherto unclimbed pillar Kirti-Nose via their route Between two Parties. Located in India’s Garhwal Himalaya, more precisely above the Kirti glacier and below the imposing South Face of Shivling, the 350m line breaches difficulties up to 7b/A3.

Siegrist explained “At the beginning of September we traveled to the Garhwal region in India. When we finally arrived, it became clear quite quickly that mountaineering and climbing would probably not go according to plan. The monsoon lasted unusually long this year and surprised us with large amounts of new snow. As a result of the avalanche risk, we had to accept that after four weeks of waiting our main target would remain unclimbed.

But a four-day weather window with exceptionally little precipitation provided an opportunity for an alternative project we didn’t want to miss out on. While waiting around at the base camp, a specific face caught our eyes. Four hundred meters tall and with an astonishing resemblance to the Nose on El Captain, we decided this would become our project.

Relatively easy to approach, south-facing, and therefore prone to drying quickly – the ideal objective for the short spell of good weather. So, we decided to tackle the 4950-Meter-tall peak at the edge of the Kirti-Glacier and named it “Kirti-Nose”. On the first 150 meters, we climbed on rock of superb quality—incredible crack-climbing for the first five pitches. We had to deal with partially loose rock flakes for the next four pitches. This made the passage significantly more demanding. Halfway into the 6th pitch, we discovered old traces of an attempted first ascent. The materials` age suggests that the attempt was made in the 90ies or the beginning of the 2000s. However, we could not identify who had tried to climb the pillar. We also did not find any more material past the old rappelling station. We climbed beyond any traces from the past and were rewarded with 120 meters of partially steep wall climbing with yet again rock of fantastic quality. After these final meters, we reached the peak right before dusk. After ten pitches, grade 7b / A3, and 350 climbing meters, we stood after four days of climbing on the intriguing rock pillar`s highest point. Happily, we lay in each other’s arms. Grateful that we were able to celebrate this success despite grueling late monsoon weather.

Despite this success, our return was clouded by some devastating news. A tragic avalanche accident on Mount Draupadi ka Danda II occurred only 24 kilometers as the crow flies from our base camp. Being part of the mountaineering community, such events deeply touch us. We would like to express our heartfelt condolences to all the bereaved families and wish them much strength and confidence.”

Member of first graduating class of UW’s Out of doors Recreation...

OUTDOORS: What may presumably go flawed? Every thing | Sports activities

$20,000 awarded to native teams to enhance out of doors entry

Why electrical automobile gross sales are anticipated to proceed climbing in...