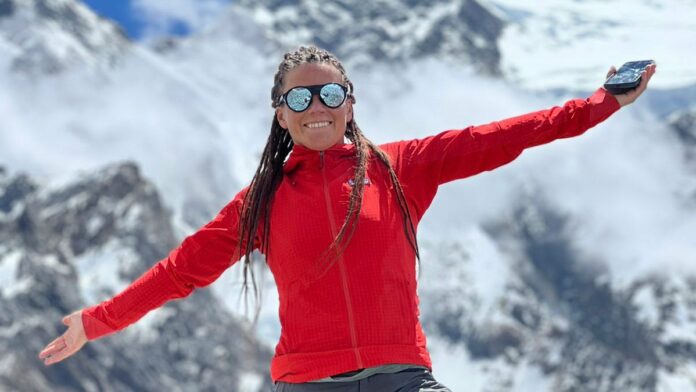 A crowd of onlookers cheered as Norwegian mountaineer Kristin Harila walked into the polished lobby of the brand new Aloft Hotel in downtown Kathmandu in mid–June. Within minutes of arriving, Harila found herself seated on a couch being force-fed a slice of celebratory cake by people she did not know.

The celebration was to honor Harila’s recent ascent of 27,766-foot Makalu, and her dogged pursuit of the speed record for climbing the 14 mountains that stand above 8,000 meters. Harila, 36, is tackling all 14 peaks alongside two Nepali guides, Pasdawa Sherpa and Dawa Ongchu Sherpa. Makalu marked the group’s sixth summit, and it came just 29 days after their ascent of 26,545-foot Annapurna, which put them two days ahead of the current speed record of 6 months and 6 days, established by Nirmal “Nims” Purja in 2019. Since then, Harila has added four more peaks to her tally: K2, Nanga Parbat, Broad Peak, and Gasherbum II.

Harila arrived to the party via helicopter from Makalu Base Camp. She was sunburned and fought to speak between rattling bouts of coughing.

“Climbing mountains is so much easier than the normal world,” Harila told me. “When you’re up there the only thing you can think about is the next step.”

As the celebration waned, Harila agreed to do a short interview in the lobby. Before we began she leaned over to me and said, in a thin voice: “I’m so exhausted. I haven’t showered since Dhaulagiri.”

Harila is an unlikely superstar in the high-stakes and macho world of Himalayan mountaineering. In her youth, she was a competitive cross-country skier who bought her first apartment at age 16. She soon traded her training for a career selling furniture for a large national firm. Money and success followed, but she sought challenges outside of normal life. On an organized trip to Kilimanjaro (19,341’) in 2015, Harila suffered from severe altitude sickness that left her unable to see. Despite the setback, she pushed on to the summit. She was hooked on mountaineering, and her life steadily reorganized itself around this new passion.

“[When I quit my job] everyone thought I was going to be just sleeping, because I didn’t sleep much,” Harila said “I was always working, working, working. Right away I went to the mountains in Norway and had a really good training summer. Then I had a climbing trip to Nepal in the autumn of 2019 when we climbed 23,700-foot Putha Hinchuli, which was my first high mountain after Kilimanjaro.”

In 2021, Harila set her sights on Mount Everest, but the expedition got off on the wrong foot. On the trek to base camp, she suffered from vomiting and extreme altitude illness, and had to stop in the Sherpa village of Lobuche, still a day’s walk from Everest Base Camp. Despite the illness, Harila pushed herself onward toward camp, and further up the mountain. She climbed with impressive speed, and recorded an unplanned world record, becoming the fastest woman to ever link Mt. Everest (29,032’) and Lhotse (27,930’) in a single climb. She reached both summits in under twelve hours.

“Ok—I’m pretty good at this,” Harila said about the achievement. Before she finished her descent to Base Camp, Harila had set her mind on Purja’s record. Purja became a global celebrity after setting the new record, and in 2021 the film documenting his climbs called 14 Peaks: Nothing is Impossible aired on Netflix.

“Of course it’s a crazy idea to try to do the same that Nims did because people don’t believe I can do it,” Harila said.

Harila said that she encountered hurdles in financing her attempt at the record in part because of her gender. “I asked one big Norwegian company for sponsorship four times. At first I got an offer for a 30 percent discount,” she said. “Now, they’ve written me and have said ‘we would like to have a talk with you.’ Because now it’s real. People haven’t believed in this project—they don’t believe that a girl from Norway can come and do this.”

According to Harila, achieving the record is a secondary goal of her expedition. She wants to prove that women have a place in high-altitude mountaineering. “People believe that men are better at climbing mountains, but that’s just not true,” she said. “I only care about the records because they will give the publicity we need to focus on this. And, of course, to show that we can actually do the same.”

In recent years, climbing the 14 tallest mountains on the planet in a single year has become more accessible due to the use of helicopter transportation between base camps, artificial oxygen systems, and a growing number of Nepali expedition companies that specialize in stringing together ascents on a back-to-back schedule. The risk and the challenge are still extreme, but the biggest hurdle for Harila and others comes months before they set foot on a mountain.

Raising the funds to pay for a project of this nature has been her primary challenge.

“Most of the project, I’m paying for myself,” she told me. “The dream would be to find one big company that would to sign up [to support me] and then to work with them in the industry after to bring change.”

And in the extreme sport of fundraising for major expeditions, the gender gap is amplified.

“We are still very far apart, even though we believe we are equal,” she said. “It’s much harder for women to get sponsorship, because we have a lower [brand] value. And that’s what I want to use this project for. I don’t think anything will happen if we don’t do something or say something.”

To her point, Harila couldn’t find the specialized equipment required for 8,000 meter summits in women’s sizing. “My down suit is specially made in Kathmandu.” she told me. “They needed to make it smaller, because it was impossible to find one small enough for me. But of course, everything comes in men’s sizes.”

Our interview began to wind down, and Harila prepared to head to her room. The next day, she had a flight booked back to Norway where she was scheduled to finalize a sale of her apartment to fund the remaining expeditions.

But before leaving, Harila spoke about the the two men helping her in her quest to climb the peaks. She is hoping to share all of her ascents—and the subsequent recognition—with Pasdawa and Dawa Ongchu. “They really love what they are doing and they are just as happy as I am when we reach the summit. It means a lot to them, and they have a great time,” she said.

One of Purja’s keys to success was to have separate teams of Sherpas working simultaneously on different peaks, fixing ropes and establishing the route to the top. As he traveled between peaks, he would swap out his Sherpa support teams to save time and increase his chance of success. This also, conveniently, meant that he wouldn’t have to share the record.

Harila said that Pasdawa and Dawa Ongchu’s role as guides requires them to work much harder for each ascent than she does as a paying client, and this factor may limit their chances of success. “If I can, I would love to share the record with them. But we will have to see how they are feeling. It’s a hard race and they are doing more and carrying more [than I am].” She continued, “I want them to have the record to show what they are doing. Climbing an 8,000 meter peak is never a one-man job. Or, um, a one-woman job.”

Flip your Carabiner right into a Prusik Tender

Carabiner Break Take a look at

For the Texas Girl Crushers, Rock Climbing Is a Sport for...