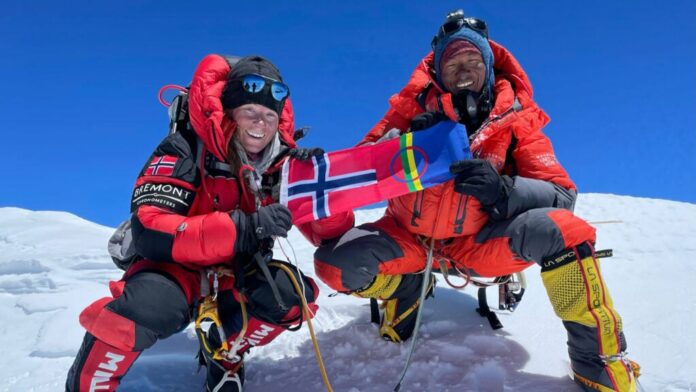 On Friday, Harila, 36, announced that she was abandoning her months-long effort to obtain a permit to enter China and climb 26,864-foot Cho Oyu or 26,335-foot Shishapangma. The decision leaves Harila two peaks shy of her goal to become the fastest person to ascend the world’s 14 peaks above 8,000 meters (26,250 feet).

“It’s over for now,” Harila wrote on Instagram. “Right now I am just trying to come to terms with the past six months, and especially all the effort we have gone through to try and get the permits for the last two mountains.”

China restricted foreign access to Tibet during the height of the COVID-19 pandemic, and the country continues to bar foreigners from entering without an entry permit from the Tibet Travel Administration.

Harila’s race against the clock began on April 28 when she ascended her first 8,000-meter peak of the season, 26,545-foot Annapurna, and the climb gave her a deadline of November 3 to climb all 14. Earlier this month Harila attempted to scale Cho Oyu from Nepal—the peak straddles the country’s border with China. But she and her team were turned back by heavy snow and high winds far from the summit.

Harila also lobbied the Norwegian government—and the climbing world at large—to try and obtain a permit for her to enter China and climb the peaks via their traditional commercial mountaineering routes. As October wore on, those efforts continued to fall short.

“We have left no stone unturned in this process, and have exhausted every possible avenue to make this happen, but unfortunately due to reasons out of our control we were unable to get the permits in time,” she added.

The decision means the speed record on the highest mountains will remain in the hands of Nirmal “Nims” Purja, who in 2019 climbed all 14 in six months and six days. Purja’s effort and his 2021 Netflix documentary 14 Peaks: Nothing Is Impossible brought considerable attention to the challenge. Prior to Purja’s expedition, the fastest mark was held by South Korean climber Kim Chang-Ho, at seven years and 310 days.

Like Harila, Purja faced hurdles in obtaining a permit to climb in China, because he sought to ascend Shishapangma after the climbing season had closed on the mountain. Purja worked with the Nepalese government, and he also lobbied support from the climbing community, and was eventually granted the go-ahead to climb the peak. In 2019 Purja told reporters that getting the permit was one of the hardest parts of his six-month-long expedition.

“In all honesty, the most emotional moment was when we succeeded in persuading the Chinese to open Shishapangma just for our team,” he told The Guardian in 2019.

The race to beat Purja captivated the mountaineering world this summer, as Harila—a former elite cross-country skier—ascended multiple peaks in the early spring. After Annapurna, she summited 26,795-foot Dhaulagiri and 28,169-foot Kangchenjunga in early May, before climbing Mount Everest, 27,940-foot Lhotse, and 27,825-foot Makalu over the course of two weeks. By the end of May she was ahead of Purja’s timetable, having ascended six of the 14 mountains in just 29 days. Harila then traveled to Pakistan in June and July, where she ascended Nanga Parbat, K2, Broad Peak, and then Gasherbrum I and II. According to website Explorers Web, she was only five days behind Purja’s pace at the end of July.

Harila climbed all of her peaks alongside the same two guides: Nepalese climbers Dawa Ongju Sherpa and Pasdawa Sherpa. In her Instagram message, she thanked both men for their efforts on the 12 peaks they summited together. She also said she plans to return in 2023 to climb the peaks and complete her challenge, even if the speed record is out of grasp.

“In times of adversity one has to find inner strength, which is why I am letting you all know that I am coming back, and I WILL complete this record next year!” she said. “Right now I am heading back to Norway to be with my family and close ones.”

Report Variety of Households to Have a good time July 4th...

A Nonprofit Push for Out of doors Entry within the Northeast

reset a code on a mix lock carabiner from Locklink

Governor Hogan Creates The Workplace Of Outside Recreation To Help Outside...