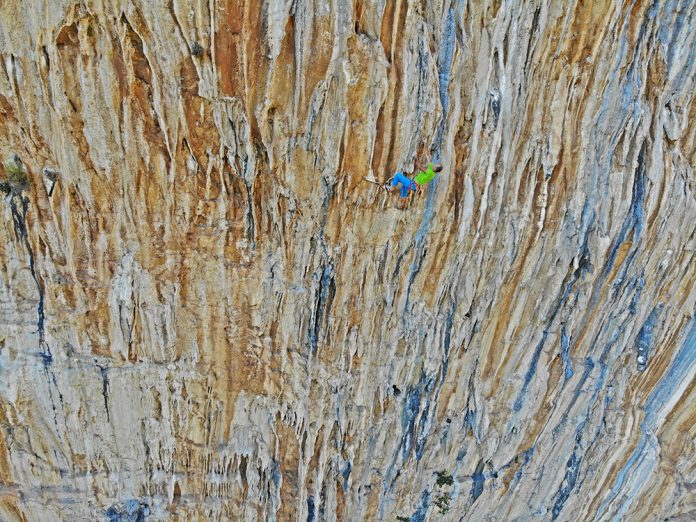 Rolando Larcher introduces the splendid crag La Severina close to Palinuro in Campania, Italy. A ’40m high overhanging forest of stalactites’ developed between 2019 and 2020 that currently boasts 20 routes between 6b and 8c.

For our 2019 family holidays we decided to discover Palinuro in southern Italy. We were joined by Marco Curti, aka Zio Tibia, who as always brought his drill with him. I set things straight right from the outset: “Hey Zio, this time no work, just play, swims and some gentle climbing in the evening.” Nodding his head he replied wryly: “Yes, of course, but you never know and, if in doubt, it’s best to bring the drill just in case…”

Once we arrived at Palinuro we set off to discover the showpiece Molpa crag and settle in. It’s a beautiful sheet of smooth limestone just above the sea, home to various editions of the ClimBrave climbing festival. The crag is home to numerous interesting climbs, of all difficulties, but since it was summer the thing we appreciated most of all was the beach.

Our next stop was Vauzo, an excellent crag bolted by the Ragni di Lecco mountaineering club. This offers predominantly overhanging climbs and since it faces north and therefore remains in the shade, we managed to climb without frying too much…

It was while traveling to Vauzo through the Mingardo Valley that a jagged strip of rock caught my attention. The view was bad because of the tunnels, the trees and the “Gola del Diavolo” gorge, so I decided to inspect it up close. From the ruins of the medieval San Severino village I continued along the grassy ridge towards the cliff. As I approached the wall I began to grasp how big it was and, right in the middle, a splendid sheet of rock sprang into view. I reached the base totally excited and was completely shocked to discover that it was totally virgin. A 40m high overhanging forest of stalactites, with top-notch rock, big enough for about 30 climbs.

I went back home totally psyched and, somewhat embarrassed, asked Zio Tibia if I could borrow his drill… He nodded his head theatrically, his eyes gleaming with satisfaction! Despite all my good intentions to rest and relax while on holiday, I simply had to bolt at least one climb, I just couldn’t miss the opportunity of such a privilege. I chose a line right in the middle, on top of a centuries-old mastic tree, from where I could observe both the sea and Mount Cervati in the Lucanian Apennines. NATO the FIRST, born the first, is a beautiful pitch, which I unexpectedly managed to free on the last evening of our trip aided by the cool sea breeze.

Back at home this crag kept haunting me. So I came up with the following idea: transform our usual autumn climbing holiday into something more demanding, marked by bolting, dust, hard work, some climbing perhaps but certainly a lot of fun with friends. Evidently I was convincing because, on the basis of just one photo and my word, in November we found ourselves crammed into a van, full of ropes, drills and bolts, fuelled by enthusiasm.

The Bolting Holiday Dream Team sprung in action: I was joined by Zio Tibia, Franz Mich, Herman Zanetti, Nicola Sartori and Tiziano Buccella. We began immediately, abseiling in with our 100m static ropes. We planned on bolting at least two climbs each, resulting in a total of 12 in just three days. This would mean that we’d still have bit of time to try them

Unfortunately, luck was not on our side… It started to rain almost immediately, but the crag is so overhanging that we managed to start bolting nevertheless. Then though it rained so much that the crag began to seep and the tufas got wet, making it very hard to climb. Halfway through the week the weather improved and Alessandro, my son, joined us; a wild card to free the hardest climbs. But before he managed to settle in he and I had to leave, early the next morning, for unexpected family matters.

Undaunted, the remaining five continued developing the crag and at the end of the week they’d bolted 14 climbs; some had been freed, and the team was physically exhausted. Despite everything, thanks to their drive and teamwork they’d been extremely productive.

When we returned home there was only one thing on our mids: a return in spring to free our creations and add new lines. But it wasn’t to be, lockdown caught us off guard! We stubbornly postponed everything to autumn, anticipating our departure in October in the hope of avoiding the rains.

Just before we returned two of the original team suddenly couldn’t come and they were replaced by Lino Celva and Cesare Pastore. Luck was finally on our side and we were greeted by splendid sun, a warm sea and no unexpected events for the entire week!

Zio Tibia continued bolting relentlessly, adding 4 more routes, bring the total to 19. The rest of the team climbed really well, had great fun and managed to free most of the routes at the crag we decided to call SEVERINA. It gets its name from the nearby town San Severino, and since the climbing isn’t easy, there’s also a hint of presumptuousness from our over-50 Dream Team! Now these fantastic climbs are there, waiting to be repeated!

Thanks:
For their friendship and support, also “political” we would like to thank the true locals: Diego Errico, Luigi Merola e Raffaele Di Domenico. For the photos: Luigi and Diego, Beatrice Bigu, Sergio Morraand  Francesco Guerra.

Reno Is Your Spring and Summer season Gateway to the Sierra

Portion of AT in Cherokee NF Closed to Tenting On account...

The Cycle Impact awarded an Out of doors Fairness Grant