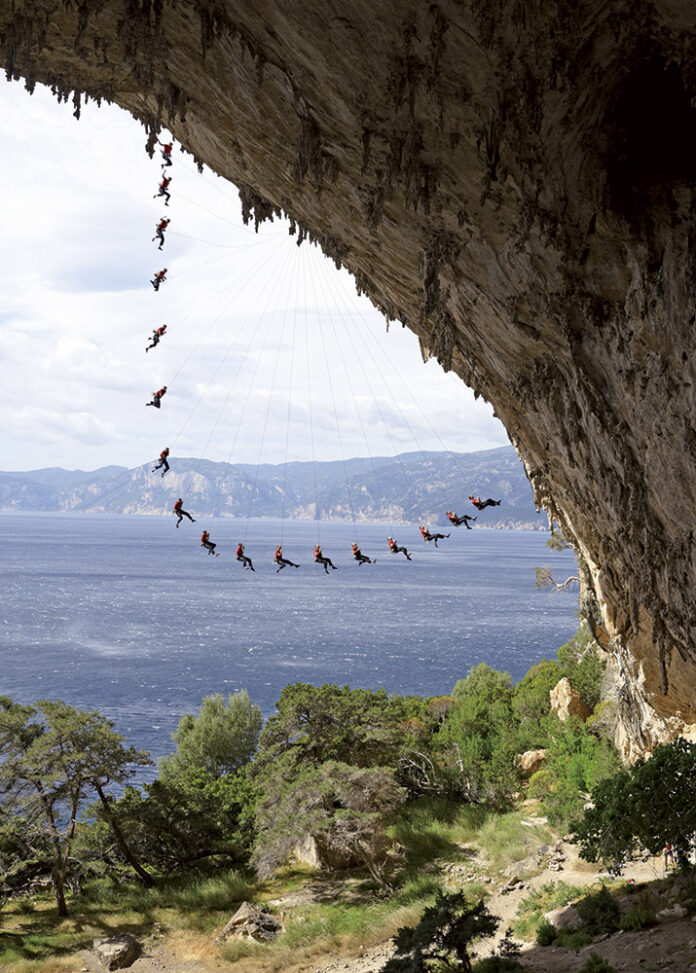 Le lion, as everyone affectionately calls it, is an absolutely extraordinary sport climb, unique I dare say, located in the Millennium Cave at Cala Gonone in Sardinia. It was bolted in 2001 by the French ace Yann Guesquiers and weaves its way for over 50 meters through the stalactites on the lefthand side of the cave. This incredible line, which can easily be considered one of the most beautiful and iconic sport climbs in Europe, was dedicated to Ahmad Shah Massoud, nicknamed “The Lion of Panshir”, who died in Afghanistan on 9 September 2001 in a suicide attack (two days before 9/11).

Due to its difficulty (8b/8b+), Le Lion de Panshir has not had many repeats in recent years, but this certainly hasn’t stopped it from becoming one of Sardinia’s most celebrated climbs. However, over time the bolts deteriorated significantly (due to the infamous internal corrosion process that affects stainless steel), and during a recent attempt it seems as if one of the bolts broke. Subsequently (in 2021) the route was repeated by Alex Honnold who didn’t seem to worry too much about the state of the gear and defined it on instagram as a “gigantic 8b”.

For some time now I’ve been wanting to rebolt the route with titanium bolts but the effort needed seemed “titanic”, in every sense of the word. Both from the physical point of view (you have to climb from the ground, rebolt a wildly steep 50-meter overhang and then chop off the old bolts that the salt has plastered to the wall) and from the financial point of view, given the expense of titanium. Thankfully I was helped out by Greek entrepreneur Petros Lappas of Lappas Climbing Bolts, who recently became the first to sell titanium bolts. Petros offered to pay for the cost of the in-situ gear which, for this climb alone, is somewhere in the region of 4/500 euros. What remained was the logistics and getting it done. This took me 3 days of work and, since I live in Cagliari, 1500km by car. It was absolutely impossible to unscrew the old bolts were to, even with a lubricant, and in the end I had to make my way along the entire route to saw off each hanger. Easier said that done across a nigh 90° roof!

More than 20 bolts (12mm titanium) and a new belay have now made this extraordinary climb immortal, and it can be climbed in safety once again. With the necessary commitment (not just physical). I decided to respect the original position of the bolts that Yann had chosen, including the big final runout, more than 50 meters from the base of the route. Oh yes, because the route is so long that an 80m rope is not long enough! If you want to do toprope you’ll have to rely on some acrobatics, otherwise from the belay pull the rope through and then the 80 meters will suffice for a spider-like descent. Enjoy the trip!

Yann Guesquiers was born in 1972 and is one of the legends of French climbing, wrongly not particularly well-known outside his country. Yann lives in Briançon and his track record is absolutely extraordinary. Even today, aged 50, he still manages to climb 9a. In 2001 he visited Sardinia with the aim of repeating Hotel Supramonte, which he narrowly failed to onsight. It was on that occasion that bolted Le Lion de Panshir in the Millennium cave.

BRIEF INTERVIEW WITH YANN GUESQUIERS by Maurizio Oviglia
Yann, how did you come across the Millennium Cave? At the time, hardly anyone knew about it!
I discovered it in 2000 while on holiday with my family in Cala Gonone. I remember that I was shocked by this forest of stalactites while descending the exposed ledge. At the time there was only one route in the entire cave, Millennium (bolted by Lecis and Sarti in 1999, ed), on the lefthand side of the cave. I was immediately taken aback by the place and the view. The following autumn I retuned with the aim of climbing Hotel Supramonte and since I repeated this rather quickly, I also managed to establish Le Lion de Panshir. Which wasn’t particularly easy, because it was really hot.

What technique did you use to equip the climb? Was it difficult? How long did it take?
It took me 2 days to equip it and I remember that the hardest thing was placing the bolts carefully between the tufas so that there wasn’t too much rope drag. A sort of overhanging slalom! In order to stay close to the wall I wound some slings around the tufas!

And was freeing the line a formality, or did it require some attempts?
It took a few attempts because some holds kept breaking and the route became harder and harder. I also happened to fall at the last runout, on “easy” ground, when a thin tufa snapped!

Wingo Inn changing to leisure lodging, to be overseen by Out...