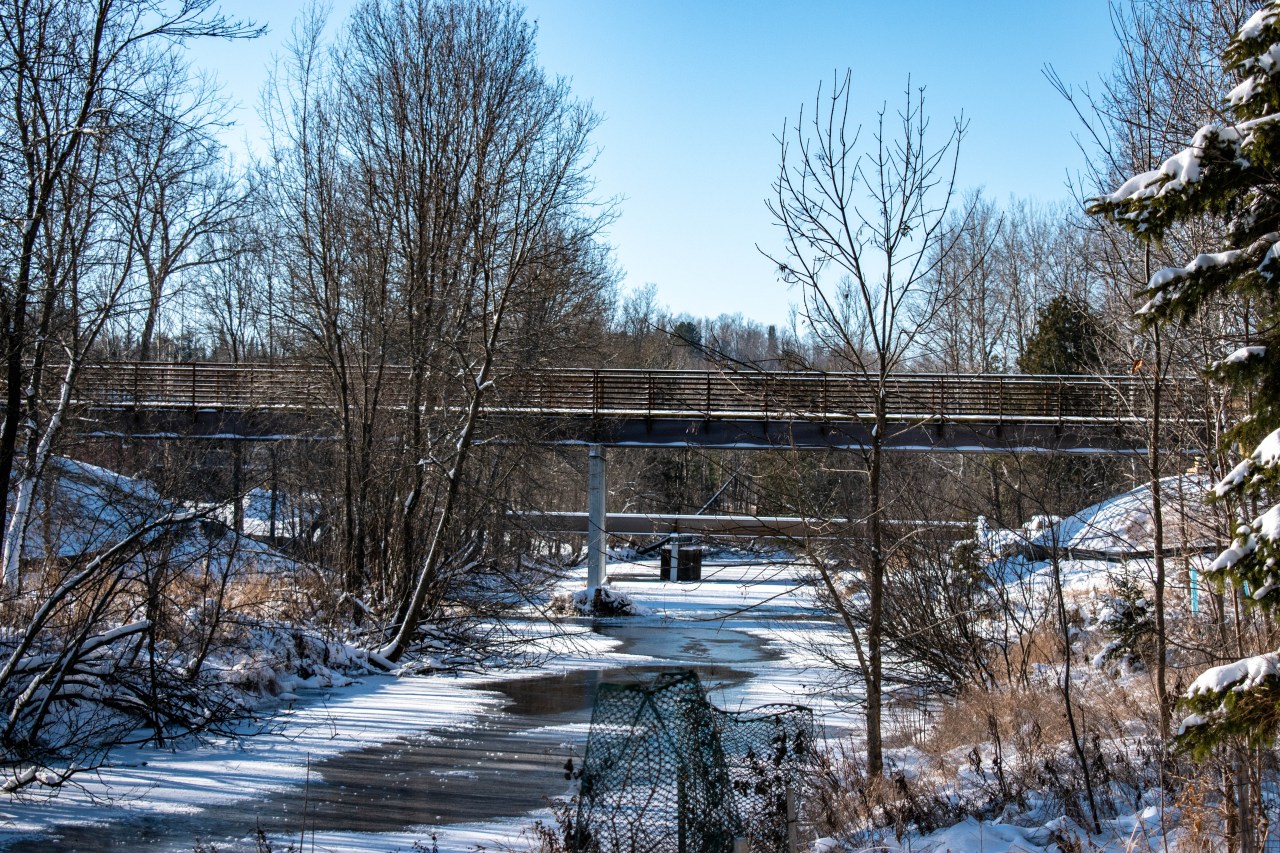 According to DNR, the ceremony marked the end of a successful season of road improvement efforts in the Upper Peninsula.

“This bridge is a great addition to our regional footpath system that road users and residents alike will benefit from,” said Rob Katona, UP Central Path Specialist at DNR’s Parks and Recreation Department. “We are pleased that this project was completed on time for the opening of the snowmobile season (December 1st).”

The project runs along the Felch Grade Rail Trail and involved replacing a former railroad trestle with a 130 foot long, 4 foot wide, prefabricated steel bridge with a wooden deck. The section over the East Branch of the Sturgeon River, off the Cheese Factory Road, had been closed for over 14 years.

“The new bridge will remove a safety concern for snowmobilers,” said Henry Wender, chairman of the Dickinson County Board of Commissioners.

The Felch Grade is a primary east-west route connecting communities along the M-69 and traveling through travel to other cities such as Republic, Gwinn, Iron Mountain, Norway, and Escanaba.

The latest South Central UP news from WJMN Local 3

Before the center piles and bridge piers were replaced, a DNR fisheries biologist and staff from Whitewater and Associates of Amasa examined and relocated freshwater clams located approximately 300 meters upstream from the project. 172 freshwater mussels of eight species, four of which are considered to be of particular concern, have been relocated. The surveys confirmed that the river is home to a wide variety of native mussels.

Herbert Construction Co. of Iron River was the contractor for the project, which was funded by DNR funds for off-road vehicles and snowmobile trails. In the last few months the DNR has completed more than half a million projects to improve the motorized and non-motorized paths in the central UP. The DNR says they have also worked to revitalize the trails, repair aging infrastructure, and improve environmental conditions on 200 miles of trails and routes through parts of Delta, Dickinson, Marquette, and Menominee counties. The total cost of the motorized path improvements was $ 423,000.

“ORV usage across the region is at an all-time high,” said Katona. “We are committed to getting the income from ORV sticker sales back on the ground to benefit the ORV community and to ensure we have a well-maintained and safe trail system.”

“We’re especially grateful to the ORV clubs that help with maintenance,” said Katona. “Without your commitment and your partnership, we would not have the high-quality and well-managed path system that we have today.”

“The path works were necessary to improve wet areas and replace old, in poor condition promenades,” said Katona. “The work has improved the overall quality of these trails. Pathway users should be happy with these improvements. We plan to further improve these areas in the next few years. “

All state trails are open to all non-motorized uses, but Cedar River is primarily for horse riders while the others have a mix of hiking and biking as their main uses.