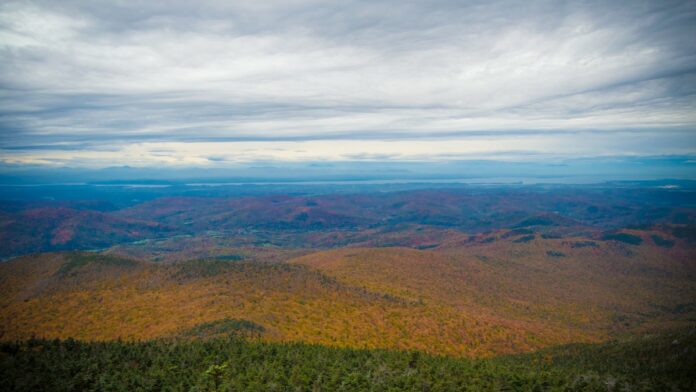 From our partners at Backpacker Magazine.

Whether you’re a dayhiker, thru-hiker, or a weekend warrior, you’ll fall in love with the Long Trail. Tracing the crest of the Green Mountains from the Massachusetts border to Canada, the 272-mile route crosses from deep hardwood forest to alpine sedgeland and back. With dozens of entry points and 70 campsites scattered along the trail, the United States’ oldest continuously used long-distance path is more than the Appalachian Trail’s little sibling. It’s a bona fide tour of one of the East’s most fascinating ecosystems.

The southernmost hundred miles of the Long Trail are also on the Appalachian Trail (which was itself partially inspired by the Long Trail). The entire route is well-marked with white blazes, so navigation isn’t much of an issue. You should still carry a map, though.

Starting from the southern terminus at the Massachusetts border, the route heads into vibrant woods. Meander past scattered beaver ponds and two historic fire towers atop 3,748-foot Glastenbury Mountain (at mile 28.5) and 3,940-foot Stratton Mountain (mile 44.5). In this section, the two best campsites come at mile 9.6, where you can camp beside a remote and tranquil beaver pond and watch the inhabitants hard at work on their dam, and on top of Glastenbury Mountain, where the surrounding peaks make for spectacular sunrise and sunset panoramas.

The next stretch of trail drops off Stratton Mountain to scenic Stratton Pond, which is often glassy enough to reflect the trees and sky above, and the Lye Brook Wilderness. From there, climb again to Bromley Mountain at mile 57.4. At the summit, you can set up camp beside the ski lifts for stunning straight-from-the-tent views. (Looking for someplace a little cozier? The Bromley Shelter is just a mile back.) Head up and over the crest of the Peru Peak Wilderness. At mile 60, drop to Griffith Lake and trace the shoreline for half a mile. Climb to the ridgetops again with a contour around Baker Peak. From there, head to the Little Rock Pond shelter at mile 74.6 to camp for the night. It’s well worth staying in the morning to watch early light over the water and the island just offshore. Then, venture from Little Rock Pond to deeper woods peppered with occasional waterfalls and patches of cairns. Head up and over a few smaller hills then the summit of 2,231-foot Bear Mountain, at mile 75.5. Pass another lake and the falls in Clarendon Gorge before heading into another long forested stretch followed by miles of contouring around nearby peaks, such as Killington and Little Killington.

Just past mile 120, reach one of the trail’s epic viewpoints at The Great Cliff. That’s where peregrine falcons like to nest (check for seasonal raptor closures). From there, summit the 3,215-foot Mt. Horrid, and immediately climb up 3,360-foot Cape Lookoff Mountain and 3,366-foot Gillespie Peak. This string of summits continues until mile 130. That’s where the Skyline Lodge shelter beside Skyline Pond makes for a welcome respite. Resume climbing into the Breadloaf Wilderness, where the trail follows ridgelines from peak to peak. Just past mile 190, reach the highest point in Vermont, 4,396-foot Mt. Mansfield. From Mansfield, descend briefly beside a stream to another small pond before climbing back to the crest of the mountains. Finish with an ascent of Carleton Mountain, then drop to the Canadian border and hike out the last mile to the road and the end of the Long Trail.

Know Before You Go: Water, Permits, and Season

The best time to hike the Long Trail is between June and October. That’s when snow in the high country has melted and the spring mud has dried up. Most hikers complete the trail in 3 to 4 weeks. There are plenty of water sources along the Long Trail, and the streams rarely go dry. Carry a filter with you and check current reports for any dry areas. No permit is required for the Long Trail, but a few of the shelters run by the Green Mountain Club do charge a $5 nightly fee for nonmembers. The GMC also has a certification program for end-to-end hikers, which rewards you with a certificate, a patch, and a listing in Long Trail News.

Know Before You Go: Bear Safety

The first 100 miles (or last 100, depending on your direction) of your hike will overlap with the AT, which now suggests that hikers store their “smellables” in a bear canister. You’re sharing the trails with local black bears, after all. Black bears are more skittish than grizzlies are, but if you see one, be sure to keep your distance, at least 100 yards away. There were some reports of bears trying to steak hikers’ food at some shelters on the southern part of the trail in the 2021 hiking season.

Know Before You Go: Packing and Resupplies

When it comes to packing, the Long Trail is like your typical thru-hike. You’ll need the Big Four of gear: a backpack, a shelter/hammock/tent, a sleeping bag/quilt, and a sleeping pad. You’ll also need a cooking system and a water filter. As for clothes, consider the weather and the time of year you’ll be hiking. That could mean gaiters, dry socks, and rain pants for rainy, muddy season or a durable hardshell layer to protect you from snow. Don’t forget to bring a trowel strong enough to dig a cathole through Vermont’s rocky soil, too.

You probably don’t want to carry three or four weeks of food on your back at once, so you should plan for resupplies every week or so, given your expertise level and how much you want to carry. Luckily, there are plenty of trail towns along the LT, so you are never too far from a gas station or grocery store if needed. Hiking NOBO? Here are the best places to resupply along the trail, according to LongTrailVermont.com. Hiking SOBO? Here’s the same list with the accurate mile markers.

How long does it take to do the Long Trail?

At 273 miles, the Long Trail takes the average backpacker about 20 to 30 days to complete. Each day, you’d have to average 13.65 miles to complete it in 20 and 9.1 miles to complete it in 30. With a total vertical gain of 66,000 feet on this trail, you’d be putting in the work no matter how fast you go. But, don’t rush to the trailhead: Green Mountain Club says it’s best to wait until after Memorial Day to start this thru-hike. Actually, it’s best to wait until late summer or early fall. That way, you’ll avoid the snowmelt in the spring and the bugs in the humid summer months.

Ben Feinson currently holds the trail’s FKT for his supported 2021 thru-hike at 4 days, 11 hours, and 44 minutes. Alyssa Godesky’s supported 2018 thru-hike gave her the title of the fastest female Long Trail finisher with a time of 5 days, 2 hours, and 37 minutes.

How difficult is the Long Trail?

It’s generally considered quite challenging, but the southernmost 100 miles of the trail are easier than the remaining 173. Those miles coincide with the Appalachian Trail. After that, the trail becomes rugged, muddy, mountainous, and remote. There are long spells of rain, so be sure to factor in drying time to avoid trench foot.

There are 53 mountains on the Long Trail and about half are over 3,500 feet high, so you’ll be bagging peaks every day. On this trail, you’ll also scale the highest peak in Vermont: Mt. Mansfield.

Where does the Long Trail end?

Interested in becoming an End-to-Ender? That’s Long Trail for someone who’s hiked the whole trail from one end to another. The trail traverses the length of the entire state, so you hike from the Massachusetts border at the bottom of the state to the Canadian border at the top. You can hike it northbound or southbound, but it’s more popular to hike toward Canada.

How much does it cost to do the Long Trail?

This depends based on your personal budget, travel expenses, cost of gear, length of time you’re on the trail, etc. But, let’s assume you’ve got all your gear and you’re standing at the trailhead. How much are you going to have to shell out to complete the next 273 miles?

It’s a good rule of thumb that if you plan to take any zero days in town, you’ll probably spend around $50-$70 on food and treats for the day. That’s your chance to get whatever burger or Vermont-famous Ben & Jerry’s pint you’re craving.

Kristin Smith is an editor, technical writer, and the voice behind the blog The Wild Edge. In her 10 years as a professional writer and 5 years in the outdoor industry, she’s been a whitewater rafting guide, a deckhand on a 100-year-old wooden schooner, a destinations editor for Backpacker, and an independent researcher in military environmental history.