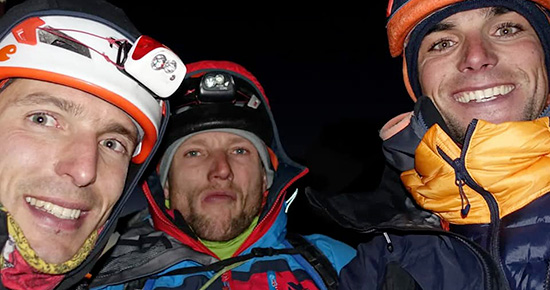 With their repeat of the Gogna-Cerruti climb on the Matterhorn the French mountaineers Leo Billon, Sébastien Ratel and Benjamin Védrines have completed their project of climbing the three great north faces of the Alps in winter via three Direttissima.

After the Eiger and the Grandes Jorasses in January, on Wednesday 12 February at 6:20 pm the French mountaineers Leo Billon, Sébastien Ratel and Benjamin Védrines reached the summit of the Matterhorn via the the famous Gogna-Cerruti route. In doing so the alpinists belonging to the elite Chamonix High Mountain Military Group (GMHM) completed their project to climb the three great north faces of the Alps in winter via Direttissima climbs

Established by Alessandro Gogna and Leo Cerruti from 14 to 17 July 1969 up the Zmutt Nose on the mountain’s north face, the 1000m line tackles difficulties up to A2, 6b, M7 and was first climbed in winter from 21 – 28 January 1974 by Edgar Oberson of Switzerland and Thomas Gross of former Czechoslovakia. The importance of this climb is underlined by Swiss ace Simon Anthamatten, who after his 2006 repet with his brother Samuel, described the route as “the logical evolution of Schmid and the Bonatti routes.”

Taking advantage of a very small window of good weather at the start of this week, the three mountaineers bivouacked at the base of the north face on Tuesday 8 February. On Wednesday they climbed quickly and repeated the route in a single day, then descended and slept at the Solvay hut before returning to the valley on Thursday 10 February.

“The wind, the fresh snow, all the elements were unleashed the day before our departure and we hesitated right until the last moment. Without a bivy, and with strong winds predicted for the night from Wednesday to Thursday, we had to get off the face at all costs! There was no room for error. A bold gamble.” explained Védrines on facebook.

On the summit they were overwhelmed by “immense relief and a great joy. This was the summit of our trilogy, and we were moved to have concluded our project. Climbing the direct historical routes of the three great north faces of the Alps in winter, complete!”

Mike Posner plans to make ‘journey of a lifetime’ by climbing...