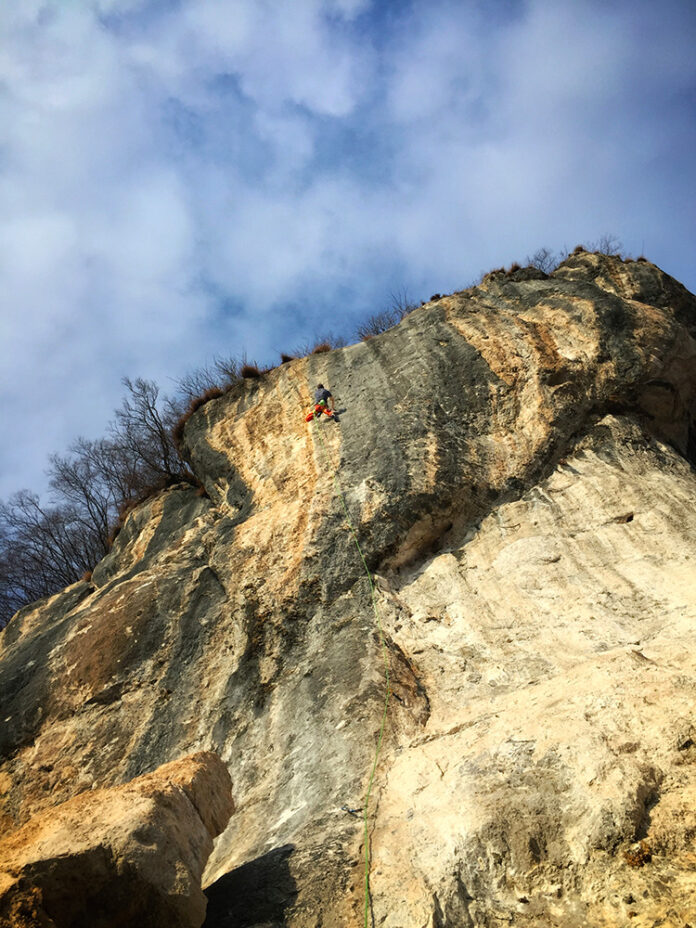 The report by 23-year-old Italian climber Luca Bana who on 26/12/2021 made the first ascent of Extrasistole galoppante 9a at the historic crag Cornalba in Val Seriana above Bergamo, Italy.

While observing the imposing Corna Bianca cliff from the town below, it is easy to make out a large portion of heart-shaped rock almost suspended in mid-air, standing out against the rest of the wall. Right in the middle of this there’s the magnificent Extrasistole galoppante, a line bolted in 2010 by Yuri Parimbelli and never climbed free until now.

The first to lay their hands on the climb was Adam Ondra who, during his visit to the Cornalba “mushroom” when he freed Goldrake on the east face in April 2010, made a couple of good attempts, falling just below the top of the route.

Subsequently, the route saw some rare action by a few climbers and then ended up falling into oblivion. So in 2019, after having repeated Goldrake in spring, I reckoned that when the temperatures dropped I’d go and check it out. November came and I climbed up to the small ledge, from where the route begins. After the first reconnaissance lap I was completely taken in by the beauty of the line, completely natural and with very particular moves. I managed to do the various sequences quite quickly and even started to make some good links, but not good enough for the redpoint.

Unfortunately, last year I didn’t manage to try it due to the various restrictions during the pandemic, so I was forced to wait until winter 2021: at the end of November I returned to Corna once again, keen on completing unfinished business. I quickly got in sync with the holds and moves, so much so that on day 3 I got through the crux, only to fall right at the end. I knew it was in my grasp and the redpoint arrived like clockwork, just before the end of the year, on the 26th of December, during my fifth session.

I have to say that the process of making the first ascent of Extrasistole galoppante was, somewhat surprisingly, more complex and mentally more difficult compared to the speed with which I sent Goldrake. This is probably due to a variety of different reasons, including the fact that first ascents generally require more time than repeating existing routes. Finding the right conditions on the wall that basks in the sun all day (anything but ideal for the tiny crimps on the crux) certainly made things more testing, as well as that fact that I could only do a couple of decent attempts per day, coupled with the “uncomfortable” and unusual position on the face: the belay stands on a tiny ledge with can only be reached by climbing a relatively straightforward first pitch below.

Having said that, the line is absolutely worth the effort and it is without a doubt one of the best hard routes in the area and probably one of my most significant climbs so far. I‘d like to hank all those who helped me during my attempts and I’m really happy to have left a little mark at this crag which is so steeped in history and to which I feel great connection!

TOPO: climbing at the crag Cornalba

Outside grant to assist Jonesboro with high quality of life issues