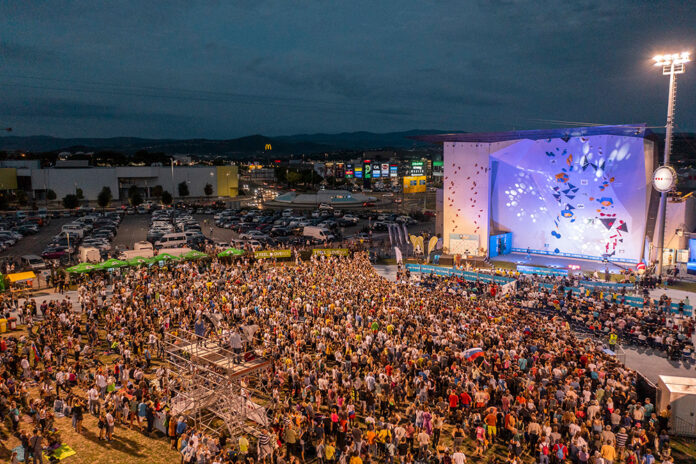 The fifth stage of the 2022 Lead World Cup was won on Saturday evening at Koper in Slovenia by home athlete Luka Potocar and Ai Mori from Japan. For both athletes this is their first victory in the Senior Lead World Cup

It was one giant party. The fifth stage of the Lead World Cup took place last weekend in Slovenia, not at Kranj as for the last 25 years, but at Koper on the brand-new climbing wall situated a stone’s throw from the scenic Adriatic sea.

The expectation to see the best in the world battle it out up the longest routes this season and, above all, to cheer on Janja Garnbret, was huge. The Slovenian, winner of the Tokyo 2020 Olympic Games, and the undisputed leader this season after victories at Innsbruck, Villars, Chamonix and Briançon, was finally competing in front of her home crowd: over 10,000 tickets has been distributed for the two-day comp and Slovenian flags could be seen flying everywhere across the bumper crowd.

The sunny Friday morning Qualifiers were followed in the evening by a women’s Semifinal that in many respects could already have been a perfect final. Janja Garnbret climbed regally and completed the only top of the evening, followed by 18-year-old Ai Mori from Japan who failed to stick the final hold. In the men’s field four other Japanese athletes qualified for the last round, demonstrating the incredible depth of talent that Team Japan can choose from, not only in Boulder but also in Lead, to the detriment of big names such as Alexander Megos, the first excluded from the final.

The wait  ended at 8.00pm on Saturday evening with the start of the men’s final and with the first athlete, Japan’s Yoshida Satone, who immediately demonstrated the intensity set by the route setters headed by expert chief route-setter Adam Pustelnik. Satone fell on the 17th hold, his teammate Ogata Yoshiyuki on the 22nd, while Homma Taisei stopped at the leap three holds higher. After 24 intense moves, this leap proved to be too physical and required too much coordination even for Olympic champion Alberto Ginés López. Sascha Lehmann was the first to breach this crux and he swiftly added five more holds before giving in to gravity, and his performance was photocopied by thehome athlete Luka Potocar who, thanks to countback, suddently found himself in provisional first place. Only Yannick Flohé and Ao Yurikusa could still do better. But Flohé – gold at the Boulder World Cup at Brixen a few months ago – perhaps spent too much energy skipping a hold on the traverse at half-height and fell off immediately after the dyno to claim bronze. While Yurikusa, last out, became the third victim of that difficult mid-height coordination dyno. So Slovenia had a new hero, 20-year-old Luka Potocar, 2nd at the recent European Championships in Munich, 4th at Chamonix, 4th at Innsbruck and now, for the first very time, on top of the podium in front of an ecstatic crowd. Could things be better than this?

Better than this is almost impossible. Yet the crowd was obviously rooting for a double Slovenian victory, for Janja Garnbret to continue her unbeatable run this season. Although the 23-year-old has won pratically everything there is to win in recent years, on various occasion in the past she has asked for more testting routes. On Saturday, her wish was fulfilled, ironically at her expense seeing that she, the last athlete out, fell off hold 27+. Yes, this was considerably higher than the tricky boulder problem crux that had stopped many athletes, but nevertheless the crowd was still incredulous because just a few minutes earlier Ai Mori had climbed much higher, all the way up to hold 30. The Japanese had climbed with the same supreme class that in 2019 had garnered her the bronze medal at the Lead World Championship in Hachioji; since then she has not taken past in any World Cups, and it’s clear that that her return to the international circuit could cause a significant reshuffle. So: victory for Mori, silver for Garnbret. And bronze for Brooke Raboutou who, as reliable as every, won her sixth medal this season thanks to climbing one hold higher than Chaehyun Seo. Jessica Pilz, Mia Krampl and Natalia Grossman unfortunately all fell from the dyno while Hélène Janicot, after three years leave, celebrated her return to competitions with an amazing 8th place. As amazing as the entire competition, and indeed the new venue at Koper which promises plenty of giant parties for many years to come.

‘No one desire a tragedy’ – Youths warned after climbing on...

How IKEA, DICK’S Sporting Items And Adidas Are Rethinking The Retailer

Climbing mortgage charges push homeownership out of attain for a lot...

Have fun Get Outdoor Day for some weekend enjoyable