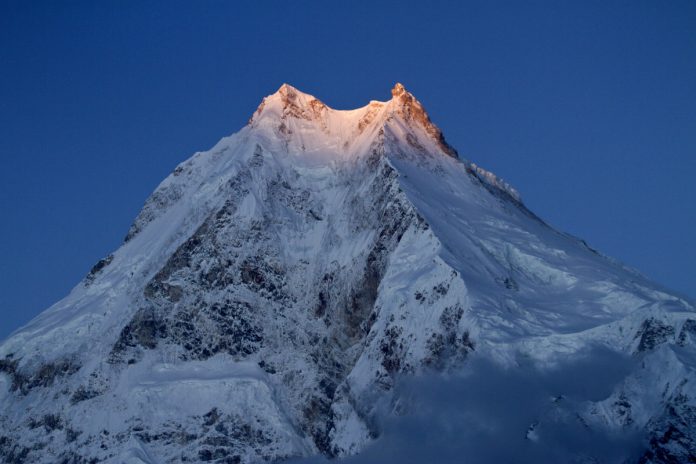 Attempting 8,000-meter peaks in the wintertime is among the most audacious feats in the climbing sphere. The 2020/2021 winter season in the Himalaya has shown both great triumph and great tragedy. K2 saw its first-ever successful winter ascent, while also claiming the lives of five men. Now, in the face of bad weather, failed attempts, and knowledge of the tragedies on K2, some attempting Manaslu (8,163 meters) have turned back, leaving only two climbers in Basecamp who may mount another attempt.

Located in central-western Nepal, Manasalu is the eighth highest mountain on Earth, whose pyramidal shape towers over adjacent peaks. It has seen only four expeditions and a total of 15 people successfully summit in wintertime: in 1983 by a Polish team, in 1984 by a Japanese team, in 1995 by a Kazakhstan team, and finally in 1998 by Korean and Nepali climbers. It has been over 20 years since Manaslu has been summited in winter.

This year, only five climbers were attempting Manaslu (as opposed to 60 or so attempting K2). Tenji Sherpa and Vinayak Jaya Malia—both Nepali climbing guides—had intentions of making a fast-and-light alpine style ascent of the mountain. However, with harsh and unstable conditions they decided that it would be too risky to climb in their style and called off their attempt.

The other team was composed of Italian alpinist Simone Moro, Spaniard Alex Txikon, and Basque climber Iñaki Alvarez. As of February 22, Moro has abandoned the expedition. This is the third time Moro has turned away from Manasalu in winter.

“The mountain and weather conditions again this year lead me to give up,” Moro wrote on Instagram. “My limits and abilities are highly inferior to those of the Mountain I have encountered in these three winters. Acceptance of this has allowed me so far to survive my dreams and let my head prevail over my heart.”

Moro is among the most capable high-altitude winter climbers alive. He has made first winter ascents of four out of the fourteen 8,000-meter peaks: Shishapangma, Makalu, Gasherbrum II, and Nanga Parbat. He climbed to 7,000-meters with his companions on Manaslu this season, but with weather forecasts of 145 km per hour winds until early March and the weight of lost climbers on K2, he decided to leave the mission.

“I have been part of a fantastic group that has accepted me and allowed me to interpret the climb with them while maintaining independence and freedom and this is a credit and a thank you that I want to acknowledge to Alex and his group,” Moro wrote.

He continues: “It was a tragic and difficult start of the year for the whole of mountaineering and we too had to emotionally manage the weight of these bereavements of friends and climbing partners who never returned from K2.”

Txikon and Alvarez remain in Basecamp awaiting a proper weather window. Their climbing permits expire on February 28, but they may apply for extensions.

“We are still at BC. Waiting for the weather and training our ability to wait, without losing sight of our physical shape,” Txikon wrote on Instagram. “In these moments of stillness and peace it is also how we feel the true Himalayas in winter. It is a true privilege to be alone in front of so much beauty and this immensity reminds us how small we are.”

Vacation horror as somewhat woman, eight, is struck and killed by...

Metropolis slates Tenting within the Park occasions for September weekend |...

One other laborious factor to purchase: Leisure boats | Outside