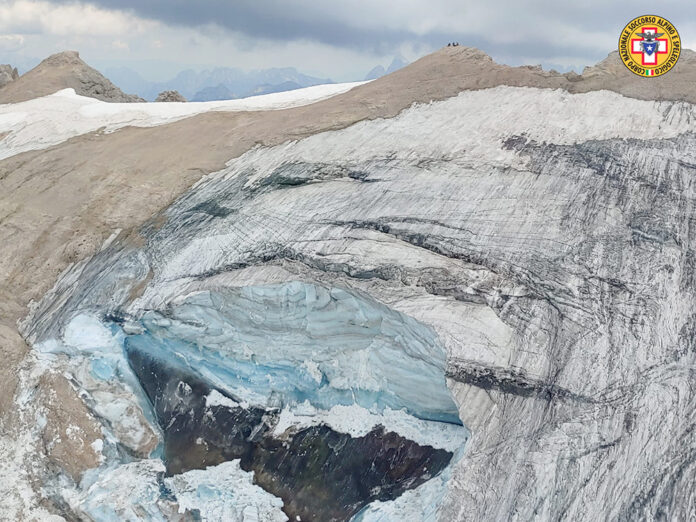 A huge portion of the Marmolada glacier in the Italian Dolomites collapsed below Punta Rocca early on Sunday afternoon, killing 5 mountaineers and injuring at least 8. The toll is still provisional and rescue efforts are still underway. Published below is the press release of the Veneto Mountain Rescue Service.

Unfortunately, the death toll and the number of injured climbers is still provisional, following the collapse of a serac from the summit cap of the Marmolada glacier, below Punta Rocca. The avalanche of snow, rock and ice fell onto the normal route, overwhelming some several teams of alpinists.

At the moment 8 injured have been recovered – 2 have been transported to hospital at Belluno, one more serious to Treviso, 5 to Trento – and unfortunately 5 people have been killed. The definitive number of mountaineers involved is not yet known.

Due to the risk of new serac falls, the Trento helicopter is carrying out the reccie flights with its Daisy Bell, therefore reducing the danger for the rescuers as much as possible. On site are the helicopters of Suem (Servizio Urgenza Emergenza Medica) from Pieve di Cadore, of Dolomiti Emergency Cortina and Trento, of the Veneto Civil Protection Squad, of the Air service center and of the Belluno and Trentino Alpine Rescue stations.

Queen’s Park’s new reopening plan permits reopening of some out of...

The Crew That Discovered Shackleton’s ‘Endurance’ Wasn’t Simply On the lookout...

Sporting Items Shops Market Evaluation By Kind and by Utility-Forecast to...