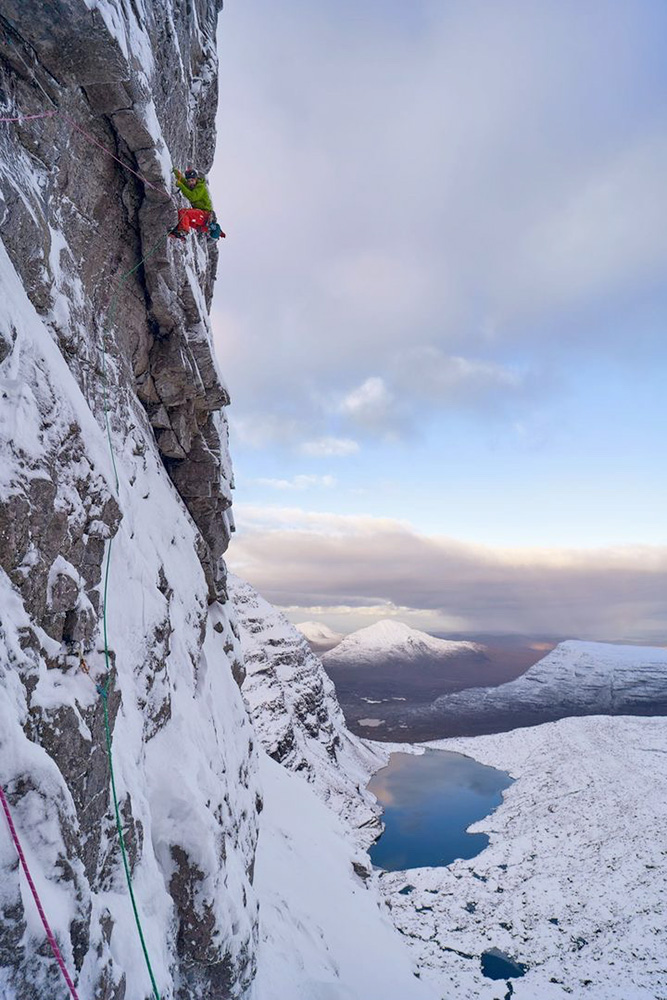 On 05/12/2021 Greg Boswell, Hamish Frost and Graham McGrath have established ‘Take Me Back To The Desert’, a completely new winter line on Beinn Eighe in Scotland.

The storms that have battered the British Isles have finally resulted in mint conditions in Scotland and while as reported by scottishwinter.com the first to get the season underway were Tilly Cottrell and Mike Lates with their first ascent of North Buttress Gully (III) on Bla Bheinn on the Island of Skye, it’s Greg Boswell who as usual has set the bar high with a new route on Beinn Eighe in the Highlands with climbing partners Hamish Frost and Graham McGrath.

Last Sunday the trio established a steep and direct new winter climb on the left side of the Eastern Ramparts Buttress of Beinn Eighe, climbing the steep, sustained line in three pitches. The route had never been climbed before, not even in summer, and does not cross any other existing climbs.

Boswell led the first two pitches, explaining “Pitch one went straight though the arching roof and into a technical crack system above, to belay below an imposing and overhanging headwall. The second pitch looked easier but turned out to be the crux. The headwall was much steeper than it looked and it was a race to figure out the secrets needed to unlock this mega line before my arms exploded. The climbing was never crazy hard (relatively speaking), it was just very pumpy and sustained!” McGrath then led the trio to the summit, just in time to enjoy the breathtaking Torridonian views.

The story behind the first ascent is interesting and adds value to their undertaking: the trio had originally planned on climbing something on the mountain’s Far East Wall, but on arrival they noticed it wasn’t in condition, hence they turned their attention to the Eastern Ramparts. They noticed the obvious steep line with its interesting arched roof and, despite not having the guidebook with them and hence not knowing if and what had already been climbed, they launched up into the complete unknown. Take Me Back To The Desert was climbed onsight, with trad gear only, with no pegs or bolts added, and has been graded IX 9. As Boswell told planetmountain.com, the route merits “3 to 4 stars and its location and quality is second to none!”

Examined: Pants You Can Pee In

Learn how to Put together for Your First Winter Tenting –...