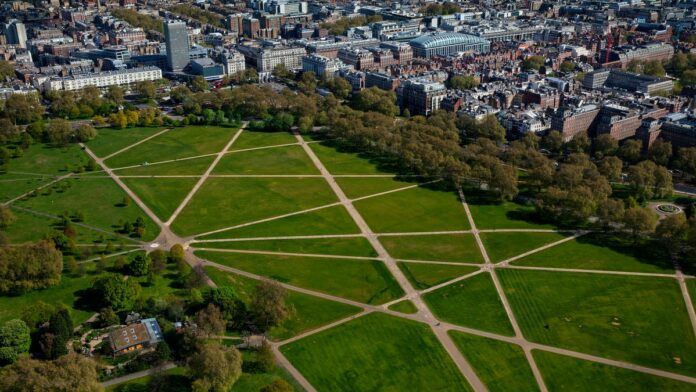 I used to think that extreme situations are where we find out who we really are. As a lifelong backpacker, alpinist, and competition ice climber, I’ve always thought that the purpose of adventure was to throw yourself against the worst conditions you could find. I thought that unless you could ascend a high peak in horrible weather, you weren’t pushing yourself—you weren’t growing. But this summer, something in me changed.

A month ago, I spent a week trapped in London. Trapped, perhaps, is a strong word; London is beautiful, and I was there to visit a dear friend. But for an outdoor-minded person, any city is still, well, a city. And London, with its 9 million residents, is a far cry from my Colorado town of 100,000.

For the first few days, London’s tall, old buildings seemed enchanting. After a few more, they felt like they were closing in on me. The alleys were suddenly too narrow. The sea of pavement felt suffocating.

Desperate, I laced up my shoes, opened up Google Maps, and headed toward the nearest patch of green, a park called Hackney Marshes.

The loop I chose was flat and mostly paved. I don’t even know if I would call my outing a hike in the technical sense of the term. Parts of it wandered alongside a canal, its stagnant surface shrink-wrapped in green scum. I circled a large soccer field. I got briefly lost in a patch of undergrowth, wet leaves flicking against my face like cold fish as a light rain set in.

Grouchy and chilled, I picked up the pace.

Raindrops needled my shoulders. Beside me, a canal boat plied the green water, its engine humming and swishing. The sound brought me back to another trip, a few months prior. For a moment I closed my eyes and took a deep breath, remembering.

During a previous visit to the UK, my friend and I had gone to Scotland for a few days to kayak through the canals there. We’re both writers, and we thought it would make a good story. It did, but not for the reasons we expected.

The canals were decidedly urban. Near Glasgow, the number of floating beer bottles was almost comical—so much so that we started counting them. By day two, I realized I was getting good at counting trash. Too good.

By counting, I was goading my brain into noticing the refuse—the way that when you start thinking of buying a certain model of car you start seeing it all over the roads. So, instead, I tried something different. I started counting swans. Blackbirds. Mallard ducklings. I counted patches of daffodils, newborn lambs, and houseboats painted blue. Hundred-year-old bridges. Aqueducts. Tunnels. Before long, I’d stopped noticing the trash. By the end, the trip felt like a real wilderness adventure—not because of anything that happened, but because of a choice I had made.

Sighing, I opened my eyes and gazed over the canal. There were no swans here, nor sheep pastures or daffodils. But, as I walked, I realized I was still setting too high of a bar. When in our everyday lives are most of us surrounded by rare wildlife—or even real natural beauty of any kind? Just as I did amid the floating bottles, I had a choice on this walk: to see the mediocre, or to hunt out the divine.

I’d always heard that extreme adventure was a way to teach us lessons that we can carry into our everyday lives. (I’ve written plenty of stories like that myself.) Now, I started to realize that maybe that wasn’t true.

After all, the kindest, most well-adjusted people I know aren’t adventurers or professional athletes. As a journalist, I’ve interviewed my fair share of the latter, and I can tell you from experience that their adventures are rarely as trying as they make them out to be on social media; after all, it’s easy to have a good time when you’re getting paid to trek through the Himalaya or sport climb in Spain. It’s easy to feel like a hero when the going is tough and the scenery’s good—and you get to come home with a story that makes everyone you know fawn over you.

Instead, the people I admire most are the people like my dad, who could take a day in the creek behind our house and make it feel like the greatest adventure in the world. That was his approach to his whole life. He had cancer for more than a decade, but somehow always took it in stride. He could laugh at himself when he got a speeding ticket. He could find humor and joy in even the greatest inconveniences.

I’d turned off the canal now, and realized I was walking alongside the River Lea, a brushy waterway barely more than a swollen creek itself. Thinking about my dad, now three years gone, and thinking about counting treasures instead of trash, I realized that the true meaning of adventure was something I’d spent my whole life misreading.

It’s not the extremes where we find out what we’re made of. It’s not when things are really good or even really bad. It’s the mediocre hikes—the ones with OK weather, boring views, sections of road-walking, even floating trash. The ones we can’t get external gratification from by telling a great story or bragging about it to a friend.

On a backyard adventure, what you put into it is what you get out of it. The reward is never handed to you; you have to work for it, every step of the way.

As I turned back through the soccer fields, I noticed the softness of the wet grass under my feet, the brisk rush of cold air against my cheeks. Back on the path, I ducked past a cyclist, darted down a cobblestone walk, and started hiking even faster. Before long, my lungs were burning, and I was smiling.

Backyard hikes, I realized as I turned down the final stretch toward home, are far more than just a consolation prize. They’re an instrument for growth and resilience in their own right.

On boring stretches of trail, you get to choose whether the glass is half empty or half full. So much of the time, the whole meaning of life—and of happiness—boils down to that choice.

If that’s true, then it’s not the extremes that define us; it’s the middle. When the scenery is decent. When the conditions are OK. When your life is settled and routine. It’s either boring or magnificent—you get to decide. And that’s the real adventure.

The Finest Males’s Operating Gear of 2021

The Combat for the Joshua Tree May Be a Watershed Second...

2. The Delivery Sling: Setting Up