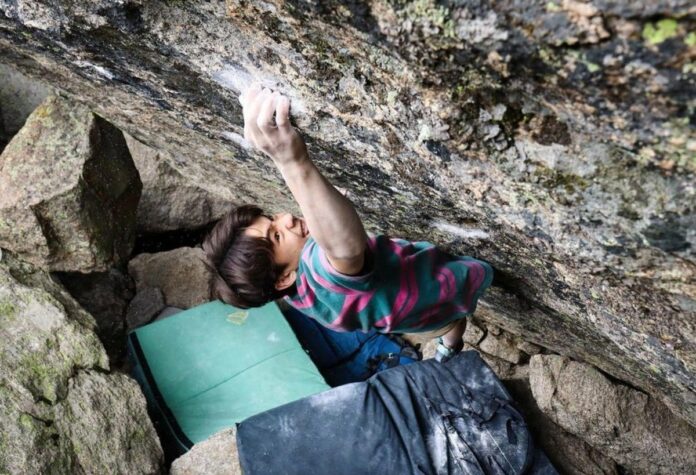 A kid with a thick tuft of dark hair and large brown eyes pulled onto the wall at Movement Climbing, Yoga, & Fitness, located in Denver, Colorado’s trendy River North neighborhood. He muscled into a move, rocked over his foot, and then stabbed out for the crimp. He fell just shy of it, coming off with a thud. From the ground, he placed his hands on his hips and eyed the move. He chalked up and prepared to try again.

Given the boy’s age and size—he stood just 4-foot-11—I might not have taken note. But the kid was working the problem alongside veteran climbers Jimmy Webb and Daniel Woods, who were also struggling to stick it. Something cool was happening. I was watching 12-year-old Beckett Hsin crush it alongside adults.

“They’re kind of his heroes,” his dad, John Hsin, later told me.

Beckett routinely climbs boulders that most grown climbers can only dream of ascending. On Monday, September 12, at Colorado’s Lincoln Lake, he marked a new personal milestone by completing the route Spatial Awareness Low, which is rated V14.

When I spoke to him on a video chat, he was quiet and shy and incredibly humble about his accomplishments. “I feel like my send of Spatial Awareness Low is controversial,” he said, “because it’s a little hole that you crawl out of, and I can fit into it a little better than most people.”

It’s true—due to his size, Beckett Beckett can keep crawling through the space where other climbers have to diverge right. While building up the ascent, he dabbed a lot, stepping off 15 before finally sticking it later that day. “So, the way I do it’s probably easier… And it has only had like two previous sends, so maybe it’s not V14,” he said.

The two previous ascents, however, were done by seasoned professional climbers Drew Ruana and Griffin Whiteside. The grade withstanding, Beckett is just the second 12-year-old climber to manage it, after Frech climber Oriane Bertone, who sent Golden Shadow in Rocklands in 2018.

Beckett traces his love of climbing back to his father. Growing up, John Tsin was a competitive gymnast. Later, in college, he started climbing recreationally and enjoyed the natural crossovers—the body movement control, the proprioceptive demands. When his oldest son, Sam, injured his back in gymnastics, John suggested he give climbing a try. Sam fell in love, and Beckett soon followed.

Beckett joined the competitive youth team at Thorton, Colorado’s gym ROCK’n & JAM’n. At first, climbing was just about fun. “I kind of just goofed around a lot and ran around bothering all of the team kids,” he said. But in the last few years, Beckett started taking training more seriously, with competing on the USA Team at international competitions being one of the end goals. He’s well on his way—earlier this year he placed second in Sport and third in Bouldering in his category at the U.S. youth national championships.

Bouldering, Beckett says, has been his preferred discipline. But lately he’s been getting more into lead climbing, something made easier by the fact that he’s now actually old enough to lead in the gym. With the next competition season beginning in October, he says plastic is currently the primary focus. But outside of competition season, Beckett tries to get outside every weekend. His favorite crags are located in Lincoln Lake, and in Rifle, Colorado, where his hardest send to date is Fluff Boy (5.13c). He also has a project in Boulder Canyon, Midnight Express (V14), that he’s hoping to return to soon. Beckett’s dream is to complete The Game (V15), also in Boulder Canyon. But that’s for the distant, far-away future, he stresses.

When I asked him what it is that he loves about the sport, Beckett said he didn’t want to pick apart the reasons. “To me, it’s just climbing,” he said.

Flying Eagles resume tenting after one other scoring spree