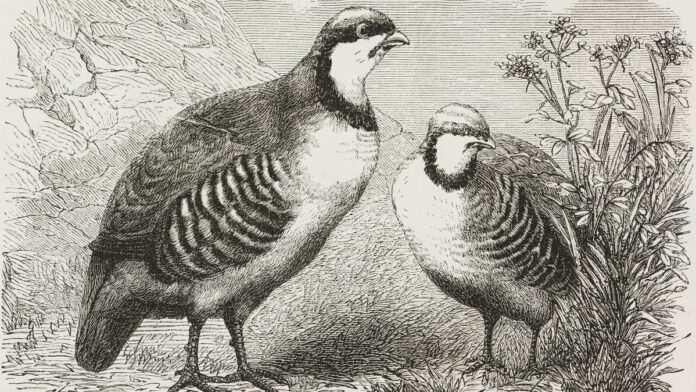 Nicknamed the “devil bird,” the chukar is not for the fair-weather hunter. These game birds introduced from the Middle East and southern Asia thrive in the steep slopes and treacherous terrain of the Great Basin region of the western United States, where they’ve evaded many a hopeful hunter. The good news: Chukar seasons are typically long, and public access is probably the best of any game bird. From Washington down to California, chukar country is almost always on BLM land. It’s also a tasty bird with plump, light flesh between the size of a pheasant and quail.

Matt Hardinge, 39, has been a hunter since he was 13. He began chukar hunting eight years ago, and now, pursuing the game bird makes up most of his time afield. Having chased chukar in Oregon, Idaho, and Nevada, Hardinge warned that first-timers should get in shape before doing so. Even the most well-conditioned athlete can struggle while ascending thousands of vertical feet on the trail of this bird.

“I took a guy out who had done an Iron Man, and he was huffing and puffing and struggling to keep up,” Hardinge says. “It’s a different type of fitness that you can only get from essentially going out and hunting chukar.”

But if you love adventure, being physically tested, and immersing yourself in the kind of vulnerability that only nature can provide, chukar hunting might be for you. Here’s how to do it.

“A lot of people compare chukar hunting to hiking or backpacking, but there’s no trail, and you’re essentially climbing mountain after mountain all day long,” Hardinge says. And at 3,500 to 7,000 feet, where the birds are generally found, the weather can change abruptly. Technical clothing and footwear is essential.

Hardinge’s go-to bottom is First Lite’s Obsidian Foundry pant ($195), which is lightweight, moisture–wicking, reinforced with nylon at the seat, knees, and cuff, plus offer exceptional temperature regulation thanks to its merino-spandex blend. With these pants, plus a combination of merino base layers, an insulated vest, and a protective soft-shell jacket on top, he’s prepared to hunt from September through January.

The farthest Hardinge has walked in a chukar-hunting day was 18 miles, but he averages closer to 10. Chasing these birds requires a lot of traversing loose, volcanic rock piles, scree fields, and basalt on extremely steep slopes in the absence of trails, which can do a number on even the most expensive boots. Hardinge typically goes through a pair each season, if not quicker, and says he’s destroyed just about every high-end brand available.

Currently, his favorite pair is the Owyhee ($360) by White’s Boots, which is relatively affordable, comfortable, long-lasting, and features a protective rand that wraps around the entire shoe.

A good upland vest is essential, and most don’t make the cut for chukar hunting. In pheasant or quail hunting, you drive to a 20-acre field to walk for 30 minutes, and then get back into your truck and head to the next one, Hardinge says. When chasing chukar, you often leave the truck and don’t return for eight hours.

Hardinge’s hunting vest must carry a minimum three-to-four liters of water for himself and two dogs, plus snacks, a first-aid kid, GPS, two boxes of ammo, a headlamp, and any extra layers. And that’s not counting any birds. Hardinge loves the Final Rise Summit Vest system (from $300), which was designed by an avid chukar hunter.

Picking a Gun and Ammo

“You can shoot chukar pretty hard, and they can still fly a mile across the canyon, land and run up the side of the mountain and die later. They’re inherently tough birds, and if you wound one, they’ll crawl under rock crevices, and the dogs can’t get to them,” Hardinge says.

Twelve-, 20- and 16-gauge shotguns are all acceptable for chukar hunting, but Hardinge prefers carrying a 12-gauge for the extra firepower and pellets to kill birds quickly rather than wounding them. He shoots shot size 6 all season through modified and improved cylinder chokes.

“I wouldn’t hunt chukar if I didn’t have a dog,” Hardinge says. “That sounds like a terrible idea.”

Good hunting dogs make finding chukar—and then retrieving them if you manage to shoot one in the steep terrain—much easier. Hardinge hunts with his two German wirehaired pointers, and they’re one of the reasons he loves hunting so much. “The dog work is phenomenal. You see them running up a mountain, slowing down and walking up on a point, and it’s super steep and treacherous, and rocks are falling down—it’s pretty special,” he says.

Any pointing dog can hunt chukar, but Hardinge prefers a medium-ranging dog. A dog that can range 1,000 yards might be excessive—Hardinge’s dogs will point at 500 yards, and even then, it will take him 20 minutes to get to them because of the rough territory. Fortunately, chukars tend to hold tight. “Sometimes, you can walk right on top of them before they get up,” he says.

How to Find the Birds

With few exceptions, hunters generally find chukar on steep, cheatgrass-covered hills with rock formations that serve as additional cover and protection. When Hardinge hunts an area for the first time, he lets the wind do the work. Hunting into the wind means the dogs can pick up a scent from half a mile away, which cuts out a lot of guesswork. Then he assesses how the wind corresponds with the topography, and he plans from there.

“You look at a mountain and you have to kind of strategize the best way to approach it—whether you want to go straight up to the best-looking terrain for birds, or if you want to conserve energy and pick a ridgeline to work a little more methodically so you don’t wear yourself out,” Hardinge says.

He likes to hunt around perennial springs, especially early in the season when the birds are looking for water. After the first rain, focus around creeks, rivers, reservoirs, stock tanks, or any water source where birds might gravitate. During windy days, look for little depressions at the top of draws that allow birds to get a little cover. Also check for rock formations that can break up a wide-open hillside covered in cheatgrass.

Later in the season, Hardinge might focus on south-facing aspects where the ground is warmer and snow melts quicker, allowing birds to access food with less digging through snow.

Chukar hunting is a sport of solitude. “Most of the time, you’re hunting for them in the middle of nowhere, and you won’t see anyone else,” Hardinge says “Or you’ll be the first or second guy there all season. That’s how I like to do it.” But this isolation obviously comes at great risk.

Falling, breaking a leg, rock slides, snake bites, and sudden snowstorms are just a few hazards of this unforgiving country, which tends to be out of cell phone range. Although he enjoys hunting by himself, Hardinge says the buddy system is always good practice. Either way, he carries a My Medic MyFAK kit ($175) with extra items for his dogs.

Another important consideration is transportation: Drive into this harsh country with a reliable four-wheel vehicle only, and be prepared with spares and recovery tools.

The 7 Greatest Tenting Grills for 2022, In keeping with Cooks

Helpful tenting gear for beneath $20

Final is finest! Ranking Strangers at Basketball watch and smile