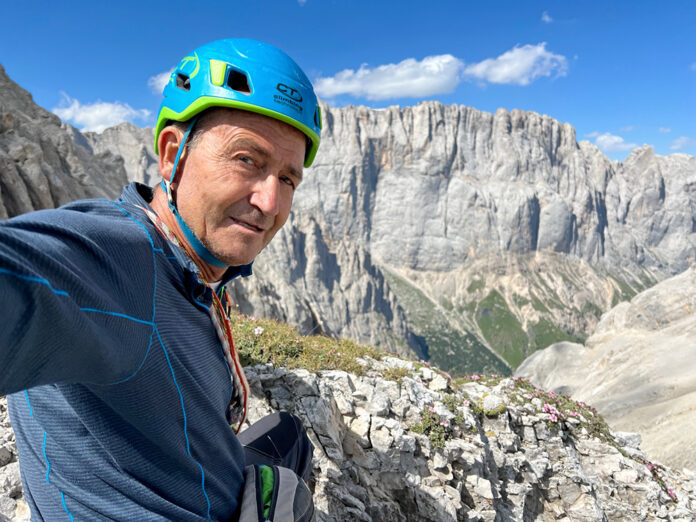 Maurizio Giordani and Nancy Paoletto have made the first ascent of ‘Su e giù’ on Monte La Banca (2680m) close to the San Pellegrino Pass in the Dolomites, Italy. The new rock climb in the Marmolada group is dedicated to Davide Miotti.

On a beautiful day in early July Nancy and I repeated Via Flora Alpina on the foresummit of Monte La Banca in the Dolomites. It’s a pleasant outing, by no means trivial, which allowed me to discover some rock which is similar to the one found on the not-too-distant south face of Marmolada.

Of course, as always I looked around for other possible unclimbed lines and a few days later we were back, to check out if the section we’d noticed was interesting and still free.

Starting from the San Pellegrino Pass, the base of the mountain can be reached quickly and easily by bike, all the way to the start of the tiresome and steep scree slope. Half an hour later you can touch the rock. Two consecutive Saturdays were all we needed to climb the 8 pitches up to the summit ridge, a fantastic natural balcony directly opposite the “sliver slabs”, ie the south face of Marmolada high above the Falier refuge.

Both the rock and the climbing itself is extremely beautiful, the type that’s really fun, and there’s so much friction that you have to force yourself to stop every now and then and place some gear, so as not to run things out too much. The route provides super safe and comfortable belays for an abseil descent and solid bolts on the pitches where needed, they’re not too close, and there are a few pegs to remind mountaineering that we haven’t completely forgotten our roots. It’s not comparable in any way to the great climbs we put up in the past, but nevertheless it’s a magnificent little journey that allows you, without too much effort, to get a feel for what they were like.

Nancy and I decided to call the route Su e giù, Up and Down, in memory of our dear friend Davide Miotti who perished during that incredible, unfortunate glacier collapse on the south face of Marmolada…

Thanks to: Karpos, SCARPA, Climbing Technology

QuietKat to Spotlight Subsequent-Technology Applied sciences at Outside Recreation Summit

OUTDOORS: Both in hand or on-line, Schuylkill Out of doors Recreation...