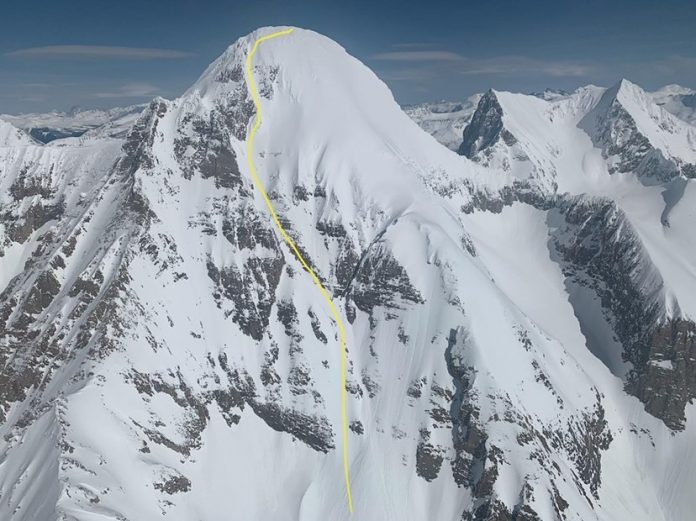 The South Face of Mount Dunkirk (3030m) the Rocky Mountains, Canada, was skied for the first time on 17/03/2021 by Christina Lustenberger, Ian McIntosh and Nick McNutt.

Not even a fortnight after their first ski descent of Mount Nelson in Canada, Christina Lustenberger and Ian McIntosh have scored another major first in British Columbia, this time with colleague Nick McNutt on the hitherto unskied south face of Mount Dunkirk.

The mountain in question is the iconic peak that can clearly be seen from the magnificent Mica ski lodge and, as such, has been scrutinised by hundreds and hundreds of offpiste skiers in the past. Despite its priomixity, the obvious face had not been skied before; due to its southern aspect it can be tricky to find in good, safe conditions, while its 50° steepness makes it prohibitive to all but the very best.

Instead of skinning and climbing up the mountain Lustenberger, McIntosh and McNutt took the somewhat faster approach and were taken to the 3030m summit by helicopter. Filming for the upcoming TGR ski movie premiering this autumn, the trio then dropped in and skied the 1000m, max 50° line, without any abseils.

Sébastien Bouin vs the category climbing at Cimaï in France

The Greatest Map App for Your Sport

The Greatest Fleeces of 2022