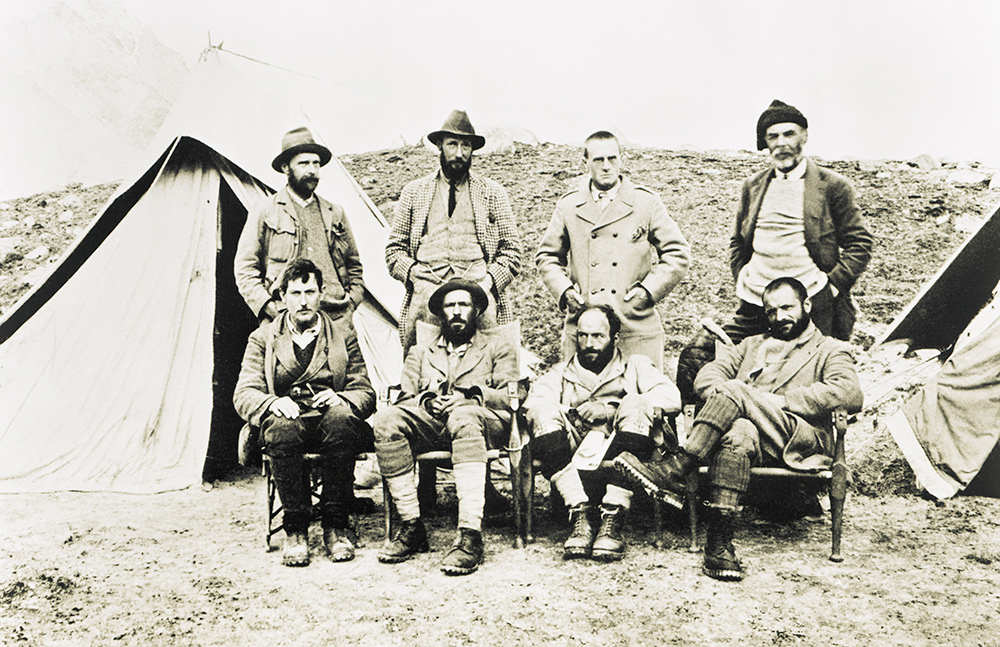 The Alpine Club has opened its landmark exhibition ‘Everest: By Those Who Were There’ to the public. The exhibition commemorates 100 years since the first expedition to Mount Everest in 1921, and explores, in intimate detail, the three Alpine Club and Royal Geographical Society expeditions of the 1920s.

Today every detail of Everest, from its precise dimensions to the exact wind speed on its summit, can be accessed at the click of a button. But for the men who set out in 1921, the mountain was an entirely different prospect. Even its exact location was uncertain and the first expedition undertook a 200-mile trek across Tibet as they, in the words of George Mallory, “walked off the map” in search of it.

The expedition, a joint venture of the Alpine Club and the Royal Geographical Society (with IBG) was the culmination of years of legal and logistical wrangling and set the stage not just for serious Himalayan mountaineering, but for the relationship climbers still have with Everest today.

The Alpine Club is now holding a landmark exhibition entitled ‘Everest: By Those Who Were There’, to commemorate 100 years since the first expedition to Mount Everest in 1921, and to explore, in intimate detail, the three Alpine Club and Royal Geographical Society expeditions of the 1920s. The 1922 and 1924 Everest Expeditions succeeded in climbing above the mountain’s North Col, with Edward Norton setting a world altitude record of 8,572m in 1924.

Using a collection of never-before-seen photographs, documents, art works and artefacts, the exhibition offers visitors a deeply personal insight into the lives of the men who first “walked off the map” in search of Everest, including those such as George Mallory and Sandy Irvine who lost their lives in pursuit of its summit.

The story of Mallory and Irvine’s disappearance during their summit bid of 1924 is well known. On 6 June 1924, Mallory and Andrew ‘Sandy’ Irvine departed to make an attempt on Everest’s summit. The pair disappeared during the attempt, giving rise to the still lingering question of whether or not they had succeeded in reaching the “roof of the world”. This tragedy marked the culmination of decades of planning and exploratory work by a variety of lesser-known historical figures. Everest: By Those Who Were There brings together their stories and links them to the well-trodden tale of Mallory and Irvine, giving the full picture of the first attempts on the mountain.

As well as diaries, photography and art works from the expeditions, visitors will also be able to see the clothing and equipment that was first used to make attempts on the mountain, including one of the earliest examples of high-altitude Oxygen equipment and Sandy Irvine’s ice axe.

Renowned mountaineer, former Alpine Club President and current Head of Exhibitions John Porter said: “These men lived in the true age of exploration. Driven by the need to escape the horrors of the Great War and a desire to see Britain first atop the “third pole”, they achieved the remarkable. By using their own records and possessions we hope to give visitors a true sense of the reality of the time and the incredible bravery it took to attempt the summit.”

Exhibition Details:
– ‘Everest: By Those Who Were There’ opens to the public from the 22 June and can be visited on Tuesdays and Wednesday between the hours of 12:00 and 17:30 until October 17, with a closure for the month of August.
– Due to a need to keep the venue Covid-secure, visitors are asked to book ahead for their visit by emailing [email protected]
– Viewings can be made for other times and days by prior arrangement by contacting the Alpine Club at the above address.
– For those unable to attend the exhibition in person or wishing to own a memento of the experience, the Alpine Club have produced an exhibition catalogue detailing the full collection. It is available for purchase via the Alpine Club website.

Items on display include:
– A photograph taken on Everest by Howard Somervell in 1924 which was, at the time, the highest photograph ever taken.
– Watercolour paintings of Everest by a number of the expedition members.
– Sandy Irvine’s ice axe, lost on Everest during his fateful summit attempt with Mallory in 1924, and rediscovered in 1933.

THE ALPINE CLUB
Founded in 1857, The Alpine Club is the world’s oldest mountaineering club and remains at the forefront of cutting-edge mountain exploration. It has members throughout the world and works to provide a forum and authoritative body for all those who travel and climb in mountain environments.

Participation in Outside Actions could be a Nice Supply of Recreation...

Psycho-Pirate will get his Multiversal hooks in Detective Comics #1051

UKC Articles – ARTICLE: Safeguarding Younger Individuals in Climbing and the...