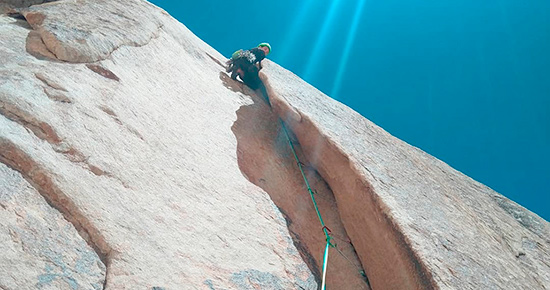 Alpinists Nasim Eshghi and Sina Heidari have made the first ascent of Mountain Warriors on the hitherto unclimbed Sun Tower on Alam Kooh (Mount Alam-kuh), at 4850m the second highest mountain in Iran.

This summer mountain guides Nasim Eshghi and Sina Heidari carried out an interesting expedition to Alam Kooh, at 4850m the second highest mountain in Iran, where they established what is now the most challenging alpine outing in the country.

The five-pitch route is called Mountain Warriors and climbs a remote, untouched pinnacle located at circa 4250m which has now been called Sun Tower. Established ground-up, the route is protected mainly with trad gear, though the occasional bolt was placed on a few pitches. All belays are bolted and equipped with a chain for the abseils, and while the difficulties are estimated at 7c+ max, the first free ascent is still outstanding.

According to Heidari, the tower’s remoteness is why this obvious feature had remained untouched until now. Writing to planetmountain.com, Heidari stated “The reason why it stayed untouched and remote is because it’s out of the normal way of approach to the main glacier and the main summit of mount Alam Kooh. The granite is perfect and there is still a lot of potential for new routes.”

Mountain Warriors
Pitch 1: 60m 7b, crack between the wall and a shark fin flake which goes up about 25 metres, then into a lay back and continue the last 15 metres with a very big off-widht until the anchor. Four bolts on the very big off-widht. The rest should be done with gear. This pitch in summer time gets 60 metres as the glacier is lower and even the added part is in good quality rock too.
Pitch 2: 50m 7c+? , a horizontal and slightly upward slab about 40 metres into a vertical wall at the end. bolted on the slab in free climbing way and has not been climbed completely free. it’s the crux of the route and gear for the last 10 metres
Pitch 3: 50m 7c , started with a moon shape well protected corner crack, slightly overhang for 30 metres into a vertical slab with a boulder problem until the anchor. Three bolts on the slab. The rest should be done with gear.
Pitch 4: 25m 6a , comfortable well protected crack, all on gear.
Pitch 5: 50m 5a leads to summit.

Dry Tortugas Nationwide Park: Haunted by Historical past, Heralded for Its...

Better of the West? What awaits Sporting, Seattle and Colorado on...

The Finest Ski and Snowboard Goggles of 2022

Motion seeks to make the outside protected for folks of coloration