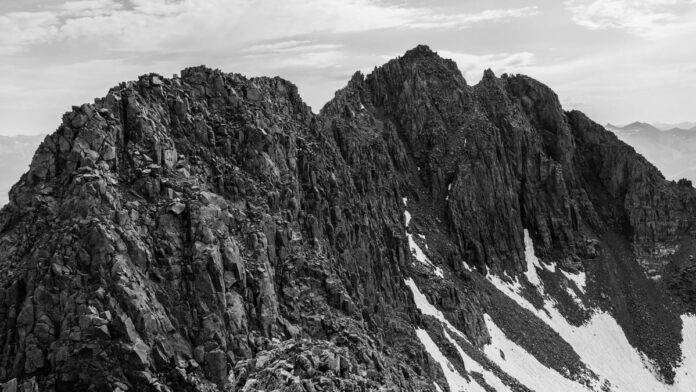 Leon Sparks, a 44-year-old sales representative in Mississippi, spends one week each summer hiking Colorado’s 14,000-foot peaks. On Sunday, July 31, 2022, Sparks attempted to climb three peaks in one day in the San Juan Range: El Diente Peak, Mount Wilson, and Wilson Peak. Unfortunately for Sparks, he fell, shattered his ankle, and had to be rescued on the side of El Diente Peak.

My plan was to camp at Navajo Lake on Saturday night, which would give me access to Mount Wilson, Wilson Peak, and El Diente Peak. If everything worked out perfectly,  I could have gotten all three in one day, made it back to the lake, and camped for one more night.

I had a rainy five-mile trek into the lake, and the only thing I had packed were my hiking clothes. Everything was soaking wet and I almost froze, but I set up my camp by about 10 P.M. On Sunday morning, I wanted to start at 4:30 A.M., but I didn’t get going until 6 A.M. So I was late, and I was rushing.

The route up El Diente involves Class Three or Class Four scrambling. I could tell the rocks were a little loose in areas, so I was being really careful with my holds. I reached an altitude of 14,100 feet at about 9:30 A.M.. And that is where I chose to make a left turn instead of going right. Looking back at 14ers.com, which is where I get my routes, I can see I followed the correct path all the way to that point. I went left because the route looked easier, but it was a mistake.

I started going up the side of the mountain, probably getting into some easy Class Five terrain. I had to get over a bulging rock, and that meant pushing up on my legs and pulling up with my arms, and then grabbing another rock with my left hand. When I pushed, my left foot slipped off its hold, and then the rock broke out from under my left hand. I started sliding. I was thinking, “Oh my god. Did this really just happen?”

I grabbed onto whatever I could, clawing at the mountain the whole way down, but nothing caught. All of a sudden, there was a rock beneath me sticking out from the mountain. It stopped my legs, and I was able to grab onto it right as I felt myself about to flip backward, which would have been deadly. Then I came to a standing position next to this rock.

After the fall, I started assessing my body. My adrenaline was pumping. And I was like, “Okay, I’ve got some cuts on my arm. I’ve got a pretty substantial gash right below my knee—nothing that I can’t fix up in order to keep going.” Then I tried to turn around to take my pack off, and when I turned, my right foot just stayed where it was. That’s when I knew I had really screwed up.

I took my pack off and set it on the rock that had saved me. I pulled my Garmin InReach off of my belt. When I grabbed the Garmin, my pack went tumbling—and I reached out to grab the pack, but then I dropped the Garmin too. I watched it go down and land in a gully about 30 or 40 feet below. I thought, “I gotta get my Garmin,” not realizing I had cell service.

I shimmied down the side of the mountain, trying to brace my broken ankle. I reached the gully, and it was full of sand. I scooted right over the top of the Garmin and grabbed it. My next step was going to be to retrieve my pack, but as I looked around the curve of the gully, I knew there was no way to get it. I did not want to hit the SOS button on my Garmin. That is the last thing I ever thought I would have to do out in those mountains. But I knew I had to do it. Before hitting the button, I looked down at my phone and saw I had service. I immediately called my wife, Jennifer.“I just want you to know that I am okay,” I told her. “I’ve got a broken ankle or a broken leg, and I’m about to hit this SOS button on the Garmin.” I gave her the heads up because she and my dad are emergency contacts, so hitting the InReach was about to notify them.

You never think you’re going to need a GPS tracker like the Garmin InReach—until you do. I’m so glad I had it.

When I hit the SOS button, Garmin immediately texted me on my cell. They followed up with a phone call, and we talked—then the responder called the Dolores County search and rescue, and they talked to team captain Keith Keesling. He called to tell me that his team was devising a rescue plan.  He was calm. I later learned later that every time Keesling got off the phone with me, he called my wife to keep her in the loop. It took a lot of anxiety and stress off her.

After a few phone calls, Keith told me he’d gotten approval from the state to send a helicopter, which was 45 minutes away. In the meantime, they sent a local helicopter, from San Miguel County search and rescue. That chopper came by, got a look at my location, and relayed that info to the rescue team. Then the other helicopter, the Mesa Verde Helitack, came 30 minutes later.

During this time, the sun ducking behind the clouds. I shivered like crazy every time the sun went away. All I had on was a light long-sleeve fishing shirt, running shorts, knee-high compression socks, and my trail shoes. I was freezing. And whenever I shivered, my leg felt like it was on fire. I watched the weather closely, because I knew that if it started raining, they were going to have to call the rescue mission off, and I’d be stuck on the mountain with no extra clothes.

Getting hauled off the mountain by a helicopter was incredible. I felt the wind from the blades, and looked up at the bottom of the helicopter. We flew for five and a half miles, which lasted only a few minutes, to get me down to the trailhead, where they lowered me down. Search and rescue crews waited for me there with an ambulance. Everyone had smiles on their faces. They seemed happy to be there and not like I had ruined their day.

As soon as I touched down it started raining—and Pepé was still on the mountain. The chopper flew back up there and picked him up in a torrential downpour. And when they got me into the ambulance, the storm felt more like a flood.

As we were driving out the dirt road in the ambulance, we ran into a mudslide. The ambulance driver, Pat, said she could get through it—she just floored it and got us through. About two miles later, we encountered another slide, and Pat floored it again. But another mile or so down the road, we encountered an even bigger mudslide. She said “there’s no way I’m getting through this.” So we waited for a tractor to arrive to help us get through it and onto the hospital.

The rainstorm ended up washing out the entire road. Later, Keith told me that the helitack operation would have been canceled if I had called just 15 minutes later. It was also the last day that the helitack chopper and its crew would be in Colorado—it had been scheduled to leave for California the following day. I was lucky.

In the emergency room, doctors cleaned me up and took X-rays. My ankle was shattered and my tibia was broken. I had surgery on it the next day.

When I was up on that mountain I had a lot of time to think. As challenge-oriented as I am, I realized that I need to keep my family in mind when I pursue these challenges. I have a two sons: 15 and ten. Another lesson was for me to simply enjoy being outdoors. Before the accident, my goal was to check all 58 Colorado fourteeners off my list. I allowed that goal to overshadow simply being in the moment. This experience also emphasized how I need to be prepared for any situation. If I hadn’t had that Garmin or my cell phone, what would I have done?

Joyful campers: find out how to look after mountain climbing gear,...

A Human-Powered Tour of the PNW Volcanoes

Montana noticed a rise in outside recreation throughout pandemic

Watch a US Marine Try the Climbing Power Check