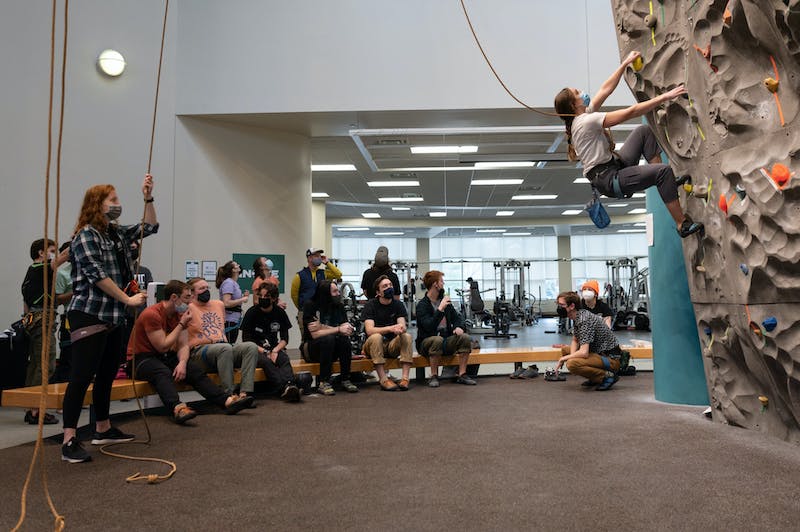 Denver-based No Mans Land Film Festival (NMLFF) is coming to The Athena Cinema this Thursday. The films will highlight the stories of female and non-binary outdoor athletes. The event is hosted by Outdoor Pursuits and the Recreation Majors Association.

“A movie like No Man’s Land is very powerful,” Zach McGinty, president of the Recreation Majors Association, said in an email. “There are some extremely bada–– outdoor women who don’t always get the recognition they deserve. This film gives them the platform they deserve while igniting a fire in others to get out there and pursue their dreams, no matter who you are.”

Chapman was introduced to NMLFF in her home state of Louisiana at her local climbing gym and was inspired to pitch the idea of ​​bringing the festival to Athens.

“It was just a cool environment,” Chapman said. “I saw it for the first time and I was like, ‘Oh my god, I can do anything.’ From then on… I watched them virtually, so I tried to keep up. I look forward to the new ones every year because they keep me going.”

Chapman said the festival provides a space for storytelling and empowerment as nature is typically associated with men.

“I think nature itself is inherently intimidating, and rightly so, because in many ways it is,” Chapman said. “It’s been a male-dominated field for some time now.”

Cody Lennon, Associate Director of Outdoor Recreation and Education at Campus Recreation, also tends to see media portraying only the masculine side of outdoor activities.

“At other outdoor film festivals like Reel Rock (Film Tour) or the Paddling Film Festival you usually see a lot of white men doing outdoor things and the reality is there are a lot more people than just white men outdoors”, said Lennon. “No Mans Land does a fantastic job of emphasizing that fact. It focuses on empowering and highlighting stories of female and non-binary athletes outdoors.”

McGinty said the film festival is also an event that could help Athenians find new outdoor activities to try for the first time.

“Many of the activities featured in the No Man’s Land film are available just minutes from campus, such as mountain biking, trail running, paddle boarding, rock climbing and more,” McGinty said in an email. “I believe that highlighting the people in no man’s land can give people the boost they need to take advantage of these local resources.”

Chapman also considers the festival to be an important event for those who have never been outdoors.

“I think it’s important that other people who might be intimidated or feel like what they’re doing or their story doesn’t matter, know that they do,” Chapman said. “They belong in these rooms too. They should feel empowered and that this is their space no matter what the mainstream media says.”

The festival starts at 7:30pm, doors open at 7:15pm. Tickets are $10 for community members and free for students. After the festival there will be a panel discussion with Rory O’Malley, Hanna Vorisek, Carrie Vieland, Elle Dickerman and Kate Campbell Bernens.

Everest Launches Client Initiative for the First Neighborhood-Pushed On-line Market Connecting Outside Lovers with Manufacturers, Merchandise and Content material Tailor-made to Their Passions

As Extra People Search Outside Enjoyable, Do not Ignore This Leisure...

Coal Is In Terminal Decline, However China’s Consumption Is Climbing