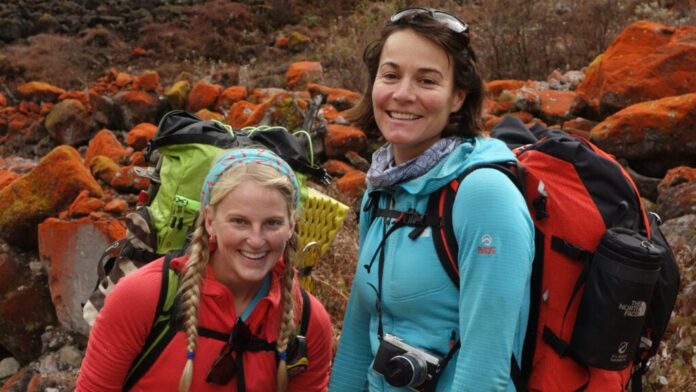 In the weeks since Hilaree died in a skiing accident on Nepal’s 26,781-foot Manaslu, I’ve relived my time with her; sometimes tearing up, sometimes smirking to myself as little moments resurface in my memory. Like the time we were tent-bound on a knife-edge ridge at 18,000 feet in Myanmar, cursing and laughing at the wind as it slammed into us. The vestibule of our tent suddenly became a sail, threatening to take flight with us inside, and Hilaree frantically cut the fabric off. During our 2012 Everest expedition, she convinced me to crowd surf off a bar at Basecamp with her. Just a few days before my wedding, we skied perfect corn on a volcano in Ecuador, giggling at our insane luck to experience such good conditions at 19,000 feet. And just before a ski mountaineering trip to the remote Sam Ford Fjord on Baffin Island this spring, I called to tell her I thought I had experienced a miscarriage. She reassured me with her smooth, calm voice that I would be ok, and that she was there for me.

I didn’t miscarry this past spring (in fact, I’m due November 18), but the first weeks of my pregnancy were rocky and uncertain. I was classified as having an at-risk pregnancy, and I couldn’t commit to going on the trip to Baffin—a remote island in the Arctic—until two days before my scheduled flight, when my doctors finally cleared me. I knew that many people would immediately judge me for even considering going on an expedition to such a remote place while pregnant, but Hils supported me in navigating my decision with measured reason and encouragement that could only have come from someone who knew exactly what it meant to be in that position. Hilaree had gone on an expedition while pregnant with her first son Quinn, and she shared her experience with me. She told me that, should I decide to go on this trip, she would be there to support me every step of the way, but she also left me the space to make the decision that I felt was best for me and my unborn son.

I first met Hilaree on Mount Everest in 2012. The two of us were the only women on the expedition, a trip funded by our mutual sponsor The North Face and led by Conrad Anker. The objectives were multifaceted and complex, involving an attempt of the unrepeated West Ridge route with no oxygen, medical research with the MAYO clinic, and a possible link up of Everest and Lhotse for some members of the team. I was simply trying to climb the normal route with supplemental oxygen but was still completely out of my element. Until that point I had primarily been an indoor competition climber and sport climber who had dabbled in ice climbing. I latched onto Hilaree as a big sister figure and felt connected to her from that trip on. The following year, Hilaree invited me on an expedition to climb Myanmar’s debated tallest peak. We spent nearly six weeks just getting to the base of the mountain, which required riding motorcycles through the monsoonal jungle, and then traveling 125 miles on foot through leech- and snake-infested mud. We suffered, ran out of food, and ultimately failed, but I’ll remember it as the greatest adventure of my life.

Hilaree struggled to accept the failure of that trip and I could tell it was a hard one to swallow. I’d argue that that experience lit a fire in her that catapulted her into bigger, more audacious goals in the following years, eventually culminating in a ground-breaking and heavily sought after ski descent of Lhotse in 2018 along with her partner Jim Morrison.

In the years that followed, Hilaree and I became close friends and adventure partners. We were each there when we met our respective life partners—I met Adrian Ballinger on Everest in 2012 and she met Jim Morrison on Makalu in 2015, where the four of us attempted to become the first people to ski the fifth tallest peak in the world. I experienced so many milestones and important life moments with Hilaree by my side. In fact, she was one of the first people I told when I found out I was pregnant in March of this year.

I went on that trip this past April with Hilaree, skier Christina Lustenberger, and climber Brette Harrington, and the stars aligned: the four of us formed an amazing team, and we skied couloirs every day in uncharacteristically stable conditions. Looking back, it feels like a gift from the universe. That was my last wild adventure with Hilaree, and we marveled every day at the beauty of the place and how lucky we all were to be there.

Now I sit here, nine months pregnant with the knowledge that Hilaree will never meet my son, or see her own sons Grayden and Quinn grow into adulthood. I ache for my own loss, and for those who were closest to her: her partner Jim, her children, and the rest of her family. No comforting platitude can ease the pain of losing her. And yet, I do believe that celebrating the way she lived is as valuable a form of grieving as any.

Before I met Hilaree, I never saw my career extending past motherhood—I just didn’t see many examples of women who had managed to make it work. The combination of time off due to pregnancy and postpartum recovery, cultural expectations that the woman does much of the child-rearing, and a lack of support within the outdoor industry toward athletes who were also mothers led me to believe that continuing a career after children would be a near impossible task.

Hilaree showed me what was possible; she was my beacon. She continued her career, traveled to faraway places both with and without her children, and kept pushing herself to be the best athlete and mother that she could be. She was honest, too—sharing the messy, vulnerable moments as well as the magical ones.

One memory comes to mind: in 2015, we were attempting to ski Makalu, the fifth tallest peak in the world. Hilaree brought her entire family on the trek to basecamp. Quinn was seven and Grayden was five. Those boys walked most of the rugged, steep terrain over a week. There were leeches, rain, and mud, and it was chaos for Hilaree to try and manage two young boys in a remote part of Nepal while also trying to notch a first ski descent. The kids got sick and Hilaree did as well, but they also thrived in so many ways. We would stop at villages along the way and they would play games of soccer with the local kids, running and screaming and having a blast. It was a unique and valuable experience to give them, to be able see this part of the world at that age.

Since she died, I have watched this mountain community overflow with grief and gratitude for this woman: a leader and pioneer in her sport as well as a friend, mother, and all-around solid human being. She was an absolute force who carved a space for herself at a time when women weren’t expected to excel, let alone lead the charge. She shattered the expectations of what it meant to be a woman and a mountaineer, forging her own path and making sure other women knew they had that choice as well. If she could do it, we can too.

Hilaree once said, “It is truly a necessity to have passion as a compass in life.” Her passion drove her to wild places and groundbreaking achievements, and helped her develop insane strength in the mountains and an ability to persevere in the face of enormous challenges. But what I will remember and try to emulate throughout my life is her humanity, vulnerability, and devotion to living her truth. She didn’t pretend to be anyone other than who she was. She wasn’t perfect and she didn’t always get it right. But she never lost sight of that compass.

I will follow in her footsteps, raising my son to appreciate the wildness of the world around him, showing him that his parents are passionate people who follow their own dreams and support him in his own. Her influence on those of us lucky enough to know her will last through our lifetimes and beyond. We celebrate Hilaree and her legacy. We will miss you Hil, and we thank you.

How (and When) Hikers Ought to Use Area Blankets