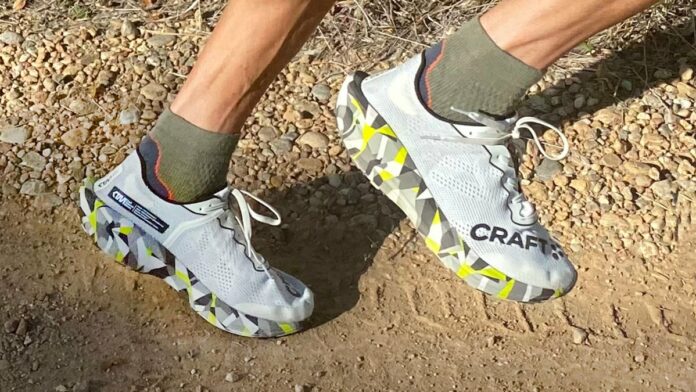 I was skeptical of Craft’s new running shoe that promised to be the footwear equivalent to a top-end gravel bike, smoothly transitioning from road to dirt. Too often, I find shoes that are proficient at handling multiple surfaces to be masters of none. But after three months of testing the retooled, all-terrain CTM Ultra Carbon 2, I found it a welcome surprise, successfully packaging the elements of a supershoe—ultra-responsive foam and carbon-fiber plates—for off-road performance.

Craft is better known for making outdoor athletic apparel—especially next-to-skin Nordic and cycling wear—and the Swedish brand does that exceptionally well. They entered the U.S. running shoe market in 2020 and stepped up their game in 2021, releasing a wide array of competitive models for road and trail.

Truth be told, there are speedier shoes than the Ultra Carbon 2 for pure road running, including the Nike Vaporfly and all its super shoe cousins across the brands. And you can find many shoes that are more nimble for traversing technical trails, including other plated models like The North Face’s Flight Vectiv, HOKA’s Tecton X, and Saucony’s Endorphin Edge. But no shoe I’ve tested compares with the Ultra Carbon 2’s performance on long dirt roads or on runs covering both road and tame trails.

Ultrarunner Tessa Chesser, who races for Craft, turns to the Ultra Carbon 2 in the same settings in which she would reach for her 29-inch gravel bike: when she’s looking for high performance in a fast, relatively-smooth, off-road setting.

“The CTM Ultra Carbon 2 is a no-brainer for dirt roads,” Chesser says. “Given that dirt roads usually don’t have any technicality to them, the carbon shoe glides right over that surface.”

The Ultra Carbon 2’s dual-density midsole is made from a new light and bouncy EVA-based blend called Ud foam.“Ud is only about half EVA,” Sarin says, “And the mix of other compounds are what make the foam special. It delivers as much or more rebound than any other EVA-based foam on the market.” Craft claims the foam’s rebound is comparable to Pebax-based blends and other supershoe midsole compounds—I found it comes close enough. And, while I didn’t put enough miles on it to truly assess wear, Craft promises it will excel in durability: “We have tested this compound over hundreds of miles and found that it continues to deliver its performance qualities over long periods of time and use,” Sarin says.

Embedded in the midsole is a curved carbon fiber plate with a slot splitting off the big toe so it can act independently and allow for torsion on varying grades and surfaces. Craft tuned the top and bottom parts of the midsole differently, with a firmer layer of Ud on the bottom and softer layer on top. Together, they deliver a cushioned, coordinated, smooth, stable, and propulsive ride. Plus, the insole is made with bouncy PU beads for added rebound directly under the foot, providing immediate bouncy feedback and step-in comfort.

The one-piece mesh upper fits closely around the heel and saddle, but opens to a wider toe box for an anatomical fit that allows for toe splay. The sizing, however, is Euro-snug and runners with higher-volume feet should go up a half size.

Even the bold color scheme of the CTM Ultra Carbon 2 is carefully selected to reflect the shoe’s design ethos. “The lines and form themselves are simple and elegant, as part of the brand’s Scandinavian design philosophy of less is more,” Sarin says.

On the (Dirt) Road

Craft made the Ultra Carbon 2 with diversity in mind. Chesser has opted for the Ultra Carbon 2 to race up to 50 miles, and other sponsored runners have used it to race as long as 100k. But the shoe also serves shorter training efforts, when the liveliness and energy return of a supershoe adds pep to a workout. “This shoe really loves a change of pace and scenery,” Sarin says.

My runs, from four to ten miles long, involved a variety of surfaces, from technical singletrack to double-wide dirt trail to paved road. I found the shoe’s 40-millimeter stack height—the legal limit for non-spiked racing shoes—too high off the ground to handle tricky footing without risking an ankle roll, making me feel unstable on uneven surfaces. That said, they did roll over rocks, ruts, and roots better than expected. The three-piece lugged outsole was nonintrusive on paved surfaces, and bit nicely into looser ground, providing considerably more traction than the buffed treads of road supershoes.

I enjoyed some of the “super” qualities of this shoe; namely its energy return from the foam mixture’s rebound, especially on harder surfaces. But I felt like The Princess and the Pea when trying to discern the different actions of the two midsole densities; I only noted the combined effect, delivering both cushioning and responsiveness. I also appreciated how the rocker served as sort of an invisible hand, subtly urging my foot toward toe-off as it moved through each gait cycle and encouraging a peppier turn-over and launch on the dirt.

I’ll continue to reach for this shoe when I don’t know where a run will take me. I won’t wear them on (any more) runs that involve precarious adventures on unstable terrain, but I plan to keep them in my regular rotation for mystery runs that involve a variety of tame, off-road surfaces—where they shine.

Sébastien Bouin at Saussois, the birthplace of French sport climbing