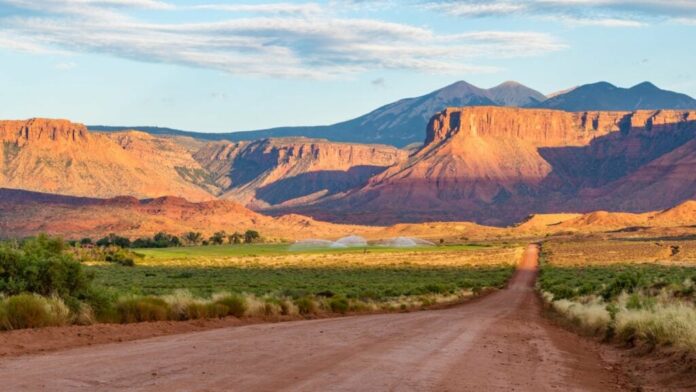 Edward Abbey, who immortalized the Southwest in his writing, would be turning over in his grave in Cabeza Prieta Wilderness west of Tucson, Arizona, if he knew that Arches National Park had to temporarily close its gates in mid-October because capacity was maxed out. The famous monkey wrencher saved a special venomous wrath for the kind of tourist who drove from one viewpoint to the next only to snap a photo and move on.

But Abbey, who was a ranger at Arches for two summers in the 1950s (when it was still a monument), also understood that there’s no better region than the Southwest, a place of mind-bending geology, impossibly living fauna, ferocious wide-open spaces, sublime light, and millennia of human history, to clear the mind and make peace with the soul.

I lived in Santa Fe, New Mexico, for 18 years, love the Southwest, and believe everyone can benefit from the solace and adventure these majestic landscapes provide. We all, however, need to grapple with how to responsibly recreate within them. If you choose to wander, this wide-ranging Southwestern road trip starts and ends in Tucson, and hits icons and off-the-beaten-path places, providing an itinerary to the best of the region. It’s ridiculous how much jaw-dropping splendor there is on this trip.

In the words of Abbey: “for god sake folks…take off those fucking sunglasses and unpeel both eyeballs, look around; throw away those goddamn idiotic cameras…stand up straight like men! Like women! Like human beings! And walk—walk—walk upon our sweet and blessed land!”

Might we politely add: leave no trace, BYO water, and respect those who came before you.

Your Base Camp: Patagonia

Patagonia, a no-frills mining and ranching town 20 miles north of the Mexican border, cropped up in the middle of Pima, Tohono O’odham, and Apache territory in the late 19th century. It has been a beloved destination for birders almost ever since.

The Gravel House is built for small groups of cyclists, with a straw-bale house that sleeps six and a wood-framed studio that sleeps two. Both have kitchens and share outdoor space to wrench on bikes or celebrate post-ride with a cocktail.

Tucson’s Arizona-Sonora Desert Museum is a must-stop destination for travelers who want to learn more about the fragile yet resilient ecosystem they are traveling through. A highlight includes daily Raptor Free Flights, where birds only native to the Sonoran Desert, like the Chihuahuan Raven, Harris’s Hawk, and Great Horned Owl, fly free while an expert describes their attributes, habitats, and behaviors.

Your Base Camp: Terlingua, Texas

It might take you a few days to get to Terlingua because there are a lot of fun detours along the way (see below). But the wait is worth it. This town, once 2,000 inhabitants strong and rich with cinnabar from which miners extracted mercury in the late 19th century, now stands by its claim as one of the most popular ghost towns in Texas, with 110 residents.

Willow House founder Lauren Werner settled in the Chihuahuan desert of far west Texas to create an austere, cool, and comforting oasis for artists and others longing for open spaces and an unbridled night sky. Twelve private casitas that look like modernist concrete cubes all have stunning views of the Chisos Mountains. Guests can bring their own provisions to grill outside or cook in the main house’s gourmet kitchen, then retreat to the privacy of their own front porch to cozy up under an Alpaca throw and gaze up to the heavens.

Stop at the Starlight Theatre Restaurant and Saloon, sit on the front porch and sip a beer, then head inside for tequila-marinated Texas quail, a Scorpion margarita, and a rollicking night of live music.

Your Base Camp: Taos, New Mexico

I’ve spent many days hiking, mountain biking, and skiing in the stunning land around Taos. To the west of the small town, the Wild and Scenic Rio Grande River has sliced like a hot knife through layers of volcanic basalt and ash, 800 feet below the Rio Grande Rift Valley. To the east, the Sangre de Cristo mountains top out at 13,161-foot Wheeler Peak, the tallest point in New Mexico. In the middle sits a town of roughly 6,000 artists, cowboys, skiers, free spirits, and others. By far the most established are the Puebloan people, who have continuously lived here for more than 1,000 years.

Kick in the nostalgia in one of the 21 vintage trailer units dating between 1951 and 1972 at Hotel Luna Mystica a couple of miles north of Taos in El Prado on the wide open Hondo mesa. Across the road are the ever-flowing tap beers at Taos Mesa Brewing; above is a blanket of stars.

Five minutes west of downtown Casa Gallina is a cluster of five classic and colorful Southwest casitas sandwiched between verdant gardens fed by two acequias, part of the town’s historic agricultural district. Each casita has a kitchen in which guests can cook freshly picked vegetables and eggs gathered daily from the 30 to 40 free-range hens, owner Richard Spera’s “girls,” that roam the property.

Carlsbad Caverns National Park, 235 miles north of Big Bend, is worth the time for a visit, especially when you contemplate how long it took to create the 120 known caves. The process began 265 million years ago with the calcareous sponges, algae, and lime-rich mud that formed the underwater reef in the Permian Sea that once covered this region. The largest cave open to the public is Carlsbad Cavern, which stretches 30 miles long and opens into the 8.2-acre Big Room, the biggest cave chamber by volume in North America.

Your Base Camp: Gunnison, Colorado

This four-hour drive pushes the northern limits of what is technically considered the Southwest. There’s a more well-trodden southern Colorado route from Taos that shoots through Durango, and that’s the best bet to take if you’re traveling in winter when the Gunnison area can be hampered by heavy snow and seasonal closings.

Great Sand Dunes National Park and Preserve is roughly 100 miles north of Taos. The tallest sand dunes in North America rise 750 feet into the sky under the shadow of the surrounding snow-capped Rockies. The park has seven backcountry campsites along the 11-mile-long Sand Ramp Trail, an ideal spot to stretch your legs and then watch the Milky Way shimmer in the night sky.

Your Base Camp: Escalante, Utah

Escalante is situated in the midst of everything: Bryce Canyon National Park, Grand Staircase Escalante National Monument, and lesser known state parks like Kodachrome Basin and Escalante Petrified Forest. A few hours farther are Zion and Capitol Reef National Parks. And between all of that bounty are unsung slot canyons closer to town and the nearby lakes, rivers, and trails within Dixie National Forest that covers the Aquarius Plateau, the highest timbered plateau in North America, topping out at 11,328 feet.

A Bighorn Pizza (Kalamata tapenade, prosciutto, ham, goat cheese & slow roasted tomato) accompanied by any leafy salad enjoyed while people watching from the front patio at Escalante Outfitters is the ideal way to refuel and re-enter after an epic outdoor adventure. Inside the store, stock up on any last-minute essentials for hiking or camping.

You could add 57 miles to the journey and spend a week meandering through the 2,000-plus formations of Arches National Park. But we recommend giving beloved Arches and nearby Moab a rest and instead head north to I-70 to hit the trifecta of mountain bike trail networks between Palisade, Grand Junction, and Fruita, Colorado, which range from a breezy four-mile beginner Rustler’s Loop to the 12.1-mile rocky and technical Lunch Loop Trails to the epic 143-mile-long Kokopelli trail that will eventually take you southeast back toward Moab.

Your Base Camp: Cottonwood, Arizona

Northern Arizona, with its Grand Canyon views, the mountain trails of Flagstaff, and the calming red rocks of Sedona, is anything but a secret. It’s especially imperative to tread lightly through this place that is the traditional home of at least 11 federally recognized nations. One way to disperse the tourism load is to stay 19 miles southwest of Sedona in the Verde Valley town of Cottonwood, so named for the willowy trees that line the Verde River.

While it lacks the mystery and awe of Sedona’s red rocks, Cottonwood has its own allure, with the craggy peaks of the Mingus mountains to the west, hiking and cross country mountain biking on the 15-mile Lime Kiln trail that links Dead Horse Ranch State Park to Sedona’s Red Rock State Park to the east; and exciting energy in the historic Old Town, which include multiple breweries, wine-tasting rooms, and restaurants.

The charming one-bedroom, one bath Casita Blanca at San Juan Ranch Airbnb in the heart of the Verde Valley, has desert and mountain views, a gas stove for chilly evenings, and is only a 15-minute drive to Old Town.

Colt Grill BBQ & Spirits on North Main Street in Old Town is legendary for its in-house smoked meats. There’s only one way to eat the delightfully messy pulled pork sandwich accompanied by a side of butter garlic fries: devour it. Expect elbow to elbow dining. Merkin Vineyards, which has a tasting room on North Main Street, sources 100 percent of their grapes from local Arizona growers.

Of the five million annual visitors at Grand Canyon National Park, only ten percent take the road less traveled to the north rim, the traditional homeland of the Southern Paiute. The North Rim Campground sits at 8,200 feet and is open from May 15 to October 15.

The payoff for this 80-mile out-and-back detour on dirt roads is unparalleled views and unpeopled access to the 28-mile-long round-trip North Kaibab trail, the only maintained trail into the canyon from the North Rim. To see the most spectacular sunrise of your life, get up before dawn and hike 4.2 miles into Cape Final. The trailhead is off the Cape Royal Road.

Contributing editor Stephanie Pearson lived in Santa Fe, New Mexico, for 18 years, has written numerous travel stories for Outside, and is the author of the recent book 100 Great American Parks.

Grant helps native youth with out of doors actions, journey

This Yr, I Hiked Each Path in My Yard

Inside The Name: Massive 5 Sporting Items Delivers One other Blowout...