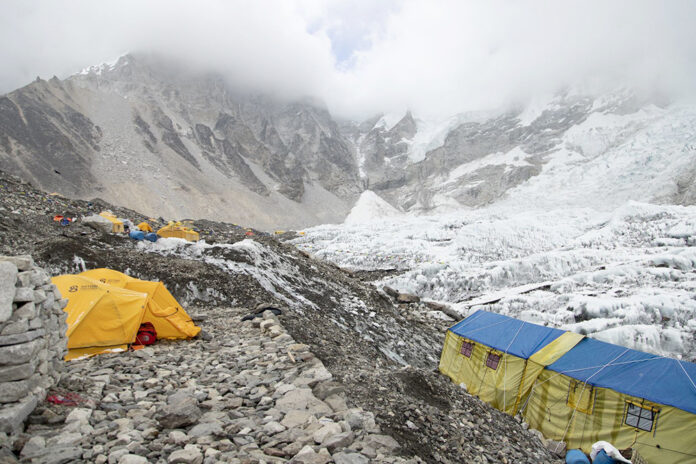 The BBC reported yesterday that the government of Nepal is considering plans to move Everest Base Camp off the Khumbu glacier as “global warming and human activity are making it unsafe.” The Base Camp currently sits just before the start of the infamous Khumbu Icefall at over 5300 meters and a 2018 from Leeds University demonstrated that some sections close to BC are thinning by circa 1m per year, resulting in dangerous crevasses and cracks appearing more frequently than ever before.

During the popular pre-monsoon season, Everest BC is reportedly home to up to 1500 people whose presence aggravates the delicate ecosytem; an estimated 4,000 litres of urine are produced daily, and fuel used to cooking and warming further compounds the problem.

After carefully assessing these technical and environmental aspects, Nepal’s tourism department is now considering moving Base Camp off the glacier altogether, to a different site which would be 200m to 400m lower. The new location has not yet been identified and although no official date has been set, Nepali officials have stated a move may happen as early as 2024.

Lake enchancment: Falls Mills mission one other win for recreation |...

Texas’s Greatest Using for Each Form of Bike owner

In search of glamour in tenting – Monterey Herald