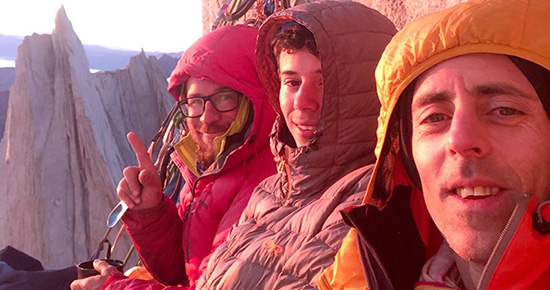 Interview with Horacio Gratton who from 26 – 27 January 2022 with fellow Argentine mountaineers Esteban Degregori and Pedrito Odell made the first ascent of El Zorro y la Rosa (6c+ C1 500m) on the SE face of Aguja Saint-Exupéry in Patagonia. The new route leads to the south summit of Exupéry, Punta Cristina.

Argentine mountaineers Horacio Gratton, Esteban Degregori and Pedrito Odell have made an important new addition to Aguja Saint-Exupéry with their El Zorro y la Rosa on the mountain’s East Face. The 500m line was climbed alpine style from 26 – 27 January 2022 and shares the last three pitches with the Austrian route before reaching Punta Cristina, the south summit of Aguja Saint-Exupéry, and has been described as having all the potential of a new classic in Patagonia’s Fitz Roy massif.  Gratton provides the details.

Horacio, why did you choose to climb Ag. Saint Exupery?
Saint Exupery is one of my favorite spires, my house is located near El Chalten, towards the mountains and I can see Saint Exupery from my window….

You mentioned on Instagram a “proyectos q tenía pendiente”. Why?
I first tried to establish a new route on the south face 20 years ago, a line that was actually finished in 2020 by the Slovenian climbers Luka Lindič and Luka Kranjk. I knew I would return sooner or later.

So where is your new route located?
This new line El Zorro y la Rosa follows another clear and natural crack system further to the left that I already had in mind.

Tell us about the ascent
We climbed the route in 2 days and bivied at the obvious snowfield half way up. We decided to try it with a bivy because we weren’t sure what to expect on the lower part, that was kind of a mystery. It looked tricky from below, but actually it wasn’t too bad at all. From the start it climbs new terrain for 10 pitches. At the end the nice crack system we were following had some dangerously loose blocks, so we were forced to traverse left and join the last 3 pitches of the Austrian route that follows the ridge to the summit.

What was the actual climbing like?
Challenging but smooth… everything went according to the plan. During the descent we established new raps that pretty much follow the line of ascent. I believe this line can become a classic, because the approach is easy and it is quite a safe climb that provides some awesome climbing.

You climbed with Esteban and Tomas
Esteban and I are both 45 years old. I’m from El Chalten while Esteban is from Mar del Plata, but he’s climbed here for the last 20 years or so. Tomas is the newcomer. He’s a local kid from El Chaltén, part of a family of climbers, only 18 years old! He’s already done some great climbs and will most likely become an outstanding alpinist! I’ve know him since he was a baby and it a real please to have him on board!

What’s next?
Oh I have many projects here… I’m just trying to accomplish some of them. This nice weather window we got recently allowed us to climb something new on Saint Exupery. What do in the future depends on the conditions we get. We’ll see.

The Finest Winter Youngsters’ Gear of 2022

Rec Plan goals to maintain the outside ‘clear, enjoyable and wild’...