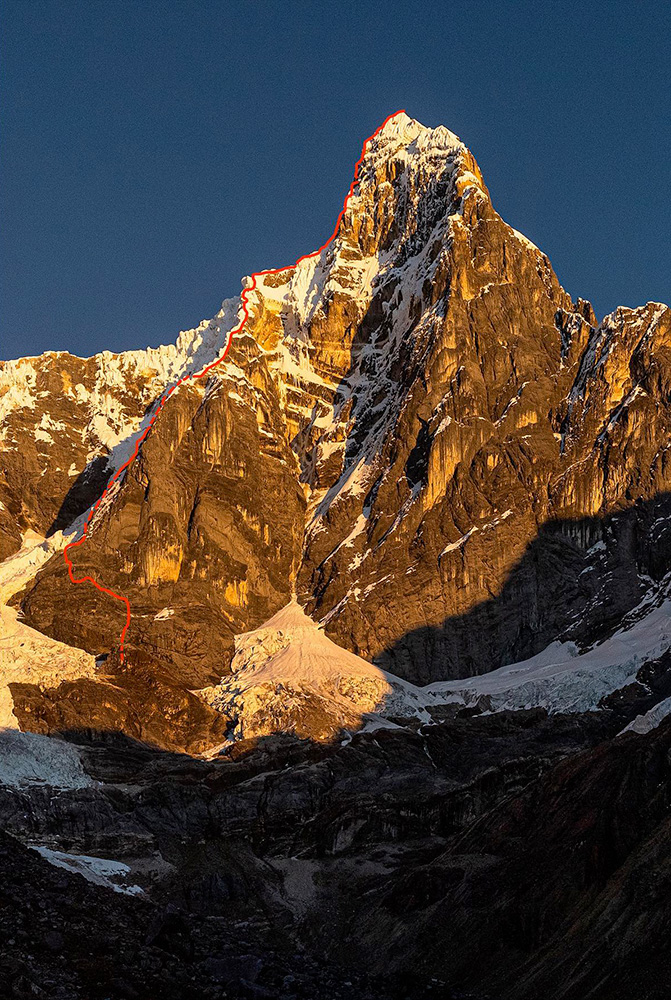 Alik Berg and Quentin Roberts have established a new route on Nevado Jirishanca (6094m) in Peru. The complex line is called Reino Hongo and graded 5.8/90°/M7.

Experienced mountaineers Alik Berg and Quentin Roberts have established a new route on Jirishanca, the spectacular 6094m peak in Peru’s Cordillera Huayhuash often referred to by westeners as the “Matterhorn of the Andes”. During a three-week expedition Berg and Roberts managed to climb an independent line on the east side of the mountain and have now described the route as “A line full of question marks. Steep complex snow, tricky mixed terrain, massive cornices, wild ice mushrooms, and a steep headwall at 6000m.”

Talking briefly to planetmountain.com after the successful ascent, Roberts explained “It was a wild adventure up there! We’re calling the route Reino Hongo after the South American mushroom kingdom in Super Mario. We think the difficulties come in at 5.8/90°/M7, although the numbers in no way represent the complexity of the climbing. The route was 1100m in elevation gain, but that also doesn’t do the up/down climbing justice!”

Berg and Roberts are currently traveling and more details are expected in due course. It’s worth noting that on the same mountain they bumped into another formidable pair of climbers, Josh Wharton and Vince Anderson, who completed the first integral ascent of Suerte, established in 2003 by the Italians Stefano De Luca, Alessandro Piccini and Paolo Stoppini.

NEVADO JIRISHANCA
Nevado Jirishanca, in Peru’s Andes, is one of those peaks that make you daydream: knife-edge crests and steep faces plastered in snow. Climbed for the first time on 12 July 1957 by Toni Egger and Siegfried Jungmair thanks to a formidable alpine-style tour-du-force up the East Ridge, even today Jirishanca remains an extremely difficult objective. Few have had the honour and fortune of standing on the Hummingbird summit and of those that did, it’s worth remembering the first ascent of the West Face breached in 1969 by the Italian Ragni di Lecco expedition led by Riccardo Cassin and climbed with Natale Airoldi, Gigi Alippi, Casimiro Ferrari, Giuseppe Lafranconi, Sandro Liati and Annibale Zucchi.

New head of outside recreation in Pa. visits Lewisburg

Grocery prices are climbing. Right here’s how a lot

As Ladakh Protests Over Rights, Omar Is Tenting In Kargil

Marc-André Leclerc is The Alpinist