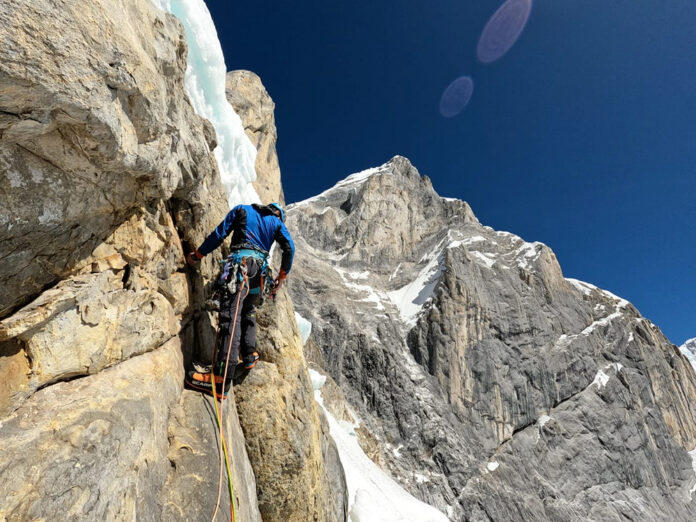 Italian alpinists Matteo Della Bordella and Marco Majori have made their contribution to Siula Grande (6344m) in Peru by adding a new route to the huge left pillar that guards the mountain’s imposing east face. The new line was established alpine style over the course of three days and is called Valore Alpino, in honour of the 150th anniversary of the Italian Mountaineering Corps.

The new route initially tackles a line to the right of Le bruit des glaçons, the route first ascended in 2016 by France’s Max Bonniot and Didier Jourdain, before sharing the last two pitches on the pillar. After the bivouac it heads left to ascend 600 meters of mixed terrain past unconsolidated snow to the summit.

The first section breaches the circa 500m high rock pillar past difficulties up to 6c. “It isn’t particularly difficult, but fascinating. We climbed the entire route clean, without leaving anything on the face” explained Della Bordella who underlined that the first two days were extremely cold. “This was certainly one of the most tiring expeditions I’ve been on. Not so much for the difficulties, but for the continuous height gains and loss, in addition to the intense cold.”

Della Bordella and Majori travelled to Peru on an elite Italian High Mountain Military Section (SMAM) expedition with Filip Babicz, Stefano Cordaro and Alessandro Zeni. The original aim had been to forge a new route up the east face of Siula Grande, but the team abandoned its attempt due to the poor conditions. While the Italians were busy trying their route, Spaniards Bru Busom and Marc Toralles managed to breach the inhospitable east face vie their Ànima de corall. Confirmation of how dangerous conditions were came from Toralles, who described his line as “the hardest route we have ever climbed.”

Della Bordella explained “When we got to the wall we realised what conditions were like and noticed the continuous rock falls. In the end we preferred not to risk too much and look for a safer route”. Before searching for an alternative the climbers made a first foray and established 150m before abandoning their attempt in favour of the safer line away from the face proper.

“I would like to congratulate Bru Busom and Marc Toralles for the great route they opened on the east face” concluded Della Bordella. “And I’d also like to thank Stefano Cordaro and Alessandro Zeni. Unfortunately they weren’t able to be with us on the face, but they showed great humility and always supported every phase of our ascent.”

“It was a really satisfying climb, the result of some great team work, on an extremely complex mountain. Marco Majori and I worked really well as a team up on the mountain. The result is a route that isn’t extreme, but adventurous, on one of the most fascinating mountains out there.”

Can You Be taught Avalanche Security On-line?

Pondering of reserving a summer time tenting vacation? You might already...

TOP ONE of the SMARTEST multi-tool!