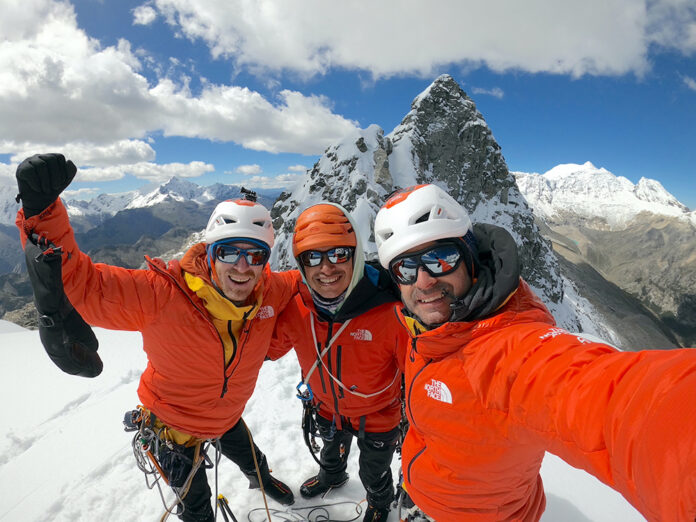 In both 2019 and 2021 Eneko Pou and Iker Pou travelled to Peru to establish new climbs and it was during their trip last year that the Basque brothers first laid their eyes on the little-climbed Urus Oeste peaks located between the Ishinca and Uruscocha valleys. They returned to this area of the Cordillera Blanca this year and, teaming up with Peruvian mountaineer Micher Quito, have completed two interesting new routes.

The first is called Hanan pacha and reaches the 5450m high summit of Urus Oeste. Hanan pacha. was climbed a11-hour round trip starting from base camp at 4900 on the Urus Oeste glacier, while the second was completed three days later and ascends 5,270m high Urus Oeste III past M6/75° difficulties. Emmoa, named in honor of the Basque Mountain Museum, is likely to the the first route up the steep needle and was climbed in a 12.5 hour round trip.

The ascents were documented by Peruvian cameraman Alex Estrada, and followed the first free ascent of Aupa Gasteiz” 7c+/160m and an acclimatisation trip up Huarapasca 5,418m, which trigger the Pou to exclaim “Not even in our wildest dreams would we have imagined such a start to our expedition…”

Yamaha Continues Investing within the Future for Outside Fans

Boulder’s Neptune Mountaineering Is About to Flip 50. We’re Fortunate to...

Why Amazon, Nvidia, and Meta Platforms Are Climbing Greater At the...