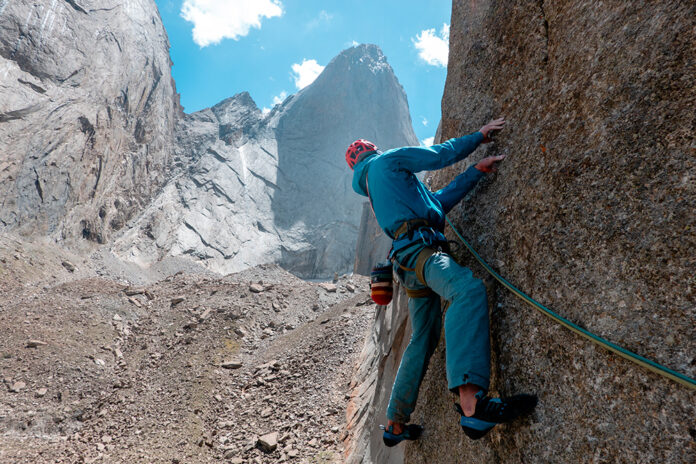 Patrick Tirler from the South Tyrol, Italy, reports about the first ascent of ‘Ak-Kalpak’ on Little Asan in the Kara-Su Valley in the Karavshin area of Kyrgyzstan’s Pamir-Alai, carried out this summer with Moritz Sigmund.

In the summer of 2022, Moritz Sigmund and I travelled with four friends from the South Tyrol to the remote Karavshin area of Kyrgyzstan. After a two‐day journey in old Soviet jeeps across steep, exposed pass roads and an eight‐hour hike with donkeys and horses, we reached the base camp in the KaraSu Valley. In search of adventure, we explored the immense granite walls, about which we had little information. The following story tells about our first ascent on Little Asan.

Moritz and I started early in the morning to climb what is probably the most obvious line in the whole valley. Since the huge 150‐meter‐long dihedral on Little Asan was neither in our topos nor the topos of our Russian Basecamp friends, we hoped to make a first ascent. However, when we arrived at the base of the wall, we we hugely disappointed. The whole corner was already bolted. What a shame. After considering what to do for a short while, our eyes wandered to an amazing flake further left in the wall. We had already judged this extremely bold line as being impossible a few days ago, but our optimism got the better of us and a short time later we were standing at the belay after the easy first pitch.

Armed with thin pegs, small cams and micro‐nuts, Moritz climbed into a steep repulsive dihedral. The walls on the left and right were blank and still humid from the rain the previous night. The crack in the middle was just wide enough for some questionable gear. Meter by meter, Moritz worked his way up technically. When the dihedral seemed to come to a dead end after about 20 meters, Moritz came down again to the belay, completely exhausted, and handed the lead over to me.

With new energy, I climbed up to the last peg and was surprised about the difficulty of the climbing. Moritz did a damn good job, but the thin crack disappeared altogether and free climbing was the only way forward. Crimping some tiny edges, I left the dihedral and traversed to the left. I was very happy when my hands reached a good crack, just about big enough to build a belay. I already knew that a free ascent would definitely prove challenging, but at that moment it was time to move on. The third pitch was not so hard and we dispatched it quickly.

I drilled two bolts at the belay, and Moritz immediately jumped onto the next pitch. About five meters to the left we spotted a crack that promised some beautiful free climbing, however a vertical slab separated us from this goal and provided a huge question mark. Much to our delight, we discovered some small crimps and the question mark transformed into a glimmer of hope.

After a few failed attempts at doing a pendulum, Moritz chose the free climbing method and tried hard. He fell again and again, but then summoned all his strength and eventually dynoed to reach the saving hold. He placed a cam and fought his way up the slightly grassy crack to our next belay. When I climbed up to Moritz, I realised how difficult the moves are on the traverse. But we remained optimistic and looked forward to our first free climbing attempts.

The view upward blew our minds. A ninety‐degree dihedral split by a perfect hand crack lay above us. Since we only had two sets of cams and the crack was the same width from bottom to top, I had to climb up and down multiple times. At the end of the crack, a small roof offered some beautiful moves and an amazing end to the pitch. At this point I was extremely happy with our decision earlier that day to try this line, also because the pitches above us looked promising. However, since threatening thunderclouds were fast approaching the valley, we fixed our static rope, rappelled, and walked back to base camp in heavy rain.

The next day, we returned to our route, jumped up the fixed rope, and reached our highpoint very quickly. The next two pitches would be the heart of our route. A huge flake, clearly visible from afar, crosses the blank granite slab; we enjoyed our luck and after some brilliant free climbing we set up a belay on two bolts at the end of the flake.

The second big question mark now lay ahead of us. The crack had come to an end, and we were now firmly established on the slab. Our original plan to reach the next crack from the right was thwarted by the blank holdless slab. We tried to come in from the left. Five meters above the belay, Moritz placed a good skyhook that he would have preferred to use as a belay. I convinced him to drill a bolt, and then I belayed him as he carefully negotiated a long runout to reach easier terrain.

From there, it should have been easy to climb behind the arête onto the summit ridge. However, the hand crack above our heads looked amazingly, and we chose the “path of greater joy”. At least, that’s what we thought. Shortly before the Thank God ledge, the hand crack became a wide offwidth. Our cams were too small and I was about to turn around when I noticed a possible way out via a traverse to the right. I immediately started climbing and realised halfway up that the climb was much harder than I thought. To make matters worse, it started to rain slightly and my holds became more slippery with every raindrop. I could no longer climb back, and a fall was out of the question. Carefully I continued climbing upwards and somehow I managed to escape from this hairy situation.

The next pitch was also much harder than it looked, but thanks to a bolt and a few tense moments, we also succeeded on this last pitch and reached the beautiful summit plateau of Little Asan at about 3600m, totally exhausted but very happy.

The next day was our rest day and while at Base Camp we received a traditional Kyrgyz hat, an “Ak‐ Kalpak”, as a gift from our local organizer. Without hesitating we decided to take the hat with us the next day on our first attempt at free climbing the route. Phillip Geisler, a strong climber from Tyrol, accompanied us because his climbing partner was sick. I managed to free climb the first crux pitch with pre-placed gear. Moritz and Phillip deciphered the moves on the second crux pitch and got very close to a send. The next day I succeeded on this pitch, too, and we managed to free all the remaining pitches up to the summit.

Even today we are still very satisfied with our line and happy to have established what is currently the most difficult free climb in the Karavshin area. As a sign of gratitude for the Kyrgyz hospitality, we named our route “Ak‐Kalpak”, which stands for the pride and unity of the Kyrgyz people.

We are also happy to have shared our vision of modern free climbing with the Russian mountaineering culture, which is strongly influenced by technical climbing, and we are already looking forward to the first repeat.

Observe Your Climbing and Boulder Periods Mechanically With Redpoint

Louisiana Outdoor Perpetually Program is a superb win for our state...

It’s Their First World Cup Ever. How Arduous Can It Be?