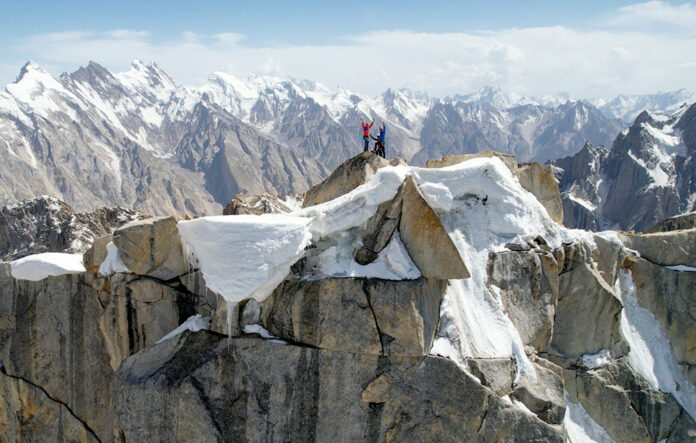 On Uli Biaho Spire (5620m) in the Trango Towers region of Pakistan’s Karakorum the Italian alpinists Alessandro Baù, Leonardo Gheza and Francesco Ratti have established Refrigerator Off-Width. The 510m new route up the mountain’s East Face was climbed alpine style and is graded 7a, A2, M5.

Italian climbers Alessandro Baù, Leonardo Gheza and Francesco Ratti have established an important new route on Uli Biaho Spire, the 5620m peak in the Trango Towers group of the Pakistan’s Baltoro Baltistan. The 510m line follows the large corner that plunges down the middle of the east face, and tackles difficulties up to 7a, A2 and M5. Incredibly, the strikingly obvious corner had never been climbed before.

The trio reached the famous granite towers above the Baltoro glacier in mid-June with photographer Ettore Zorzini. After having acclimatised by making an excellent attempt on Eternal Flame, they focused on the expedition’s main objective, namely the East Face of Uli Biaho Spire, immediately next to its bigger sister Uli Biaho Tower.

Currently there is little information to go by but writing briefly to planetmountain.com directly from Skardu, the trio confirmed they made a first attempt on 17,18 and 19 July; on the 17th they didn’t even manage to reach the base of the face, while on the 18th they opened the first two pitches but quickly realised they did not have enough gear, so they retreated.

They rested on 20 July and returned to the high camp on the 21st, while on the 22nd they reclimbed the first two pitches before establishing a further 6 pitches. They bivouacked at circa 2/3 height, and the next day followed a crack system to the left which after another 6 pitches led them to the ridge and then the summit. They descended and returned safely to base camp on July 24th.

The new route is called Refrigerator Off-Width due to the intense cold the Italians suffered throughout the ascent. More information will follow in due course about what is likely to be only the second route up the East Face of Uli Biaho Spire.

You Can Really Go Tenting In Alberta Yr-Spherical & These Are...

Watch now: An anticipated place for wildlife in Heyworth | Outdoor