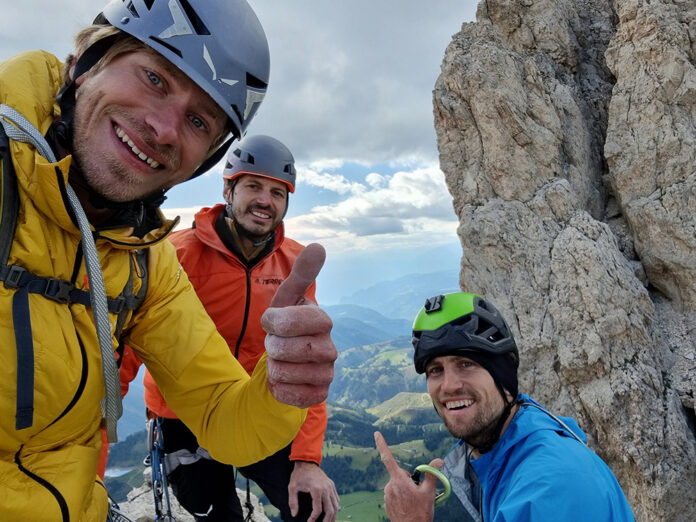 Via Casarotto on the right side of the Rotwand, also known as Roda di Vael, had been forgotten about for decades until it was rediscovered only a few years ago by Ivo Ferrari. It’s a fabulous climb and during a recent repeat I noticed another line, which is actually very logical, that follows a series of cracks further to the right.

A few days after repeating the Casarotto climb I returned to the face with Philipp Prünster and Martin Sieberer and we couldn’t believe our eyes: we had actually discovered another little gem. Our route runs fairly close to the Casarotto route, but never crosses it! Furthermore, our climb has the same good rock as the Casarotto, and this only begins to lose quality from the large ledge onwards. A little more caution is needed here.

With the exception of two pegs (see topo), the entire route needs to be protected with trad gear but some threads are already equipped with cordlets. The crux is right at the end, on the last pitch (VIII) and it is mandatory to free climb it (a cam #4 is very useful, even if one can manage without). Almost all the belays are equipped, but they need backing up (in particular the second belay, constructed entirely with cams or nuts, see topo).

While Casarotto’s logical line is the king line on this section of the red wall, our Männer die auf Wände starren has its merits because, as mentioned, the two lines do not cross each other, the rock (especially on the lower section) is excellent and the line is an obvious gift of Mother Nature.

Outside bike observe being proposed at Fox River Harley-Davidson retailer in...

Sneak in a pre-Black Friday tenting journey with these outside offers...

Does the way forward for mountaineering contain jetpacks? Perhaps it ought...