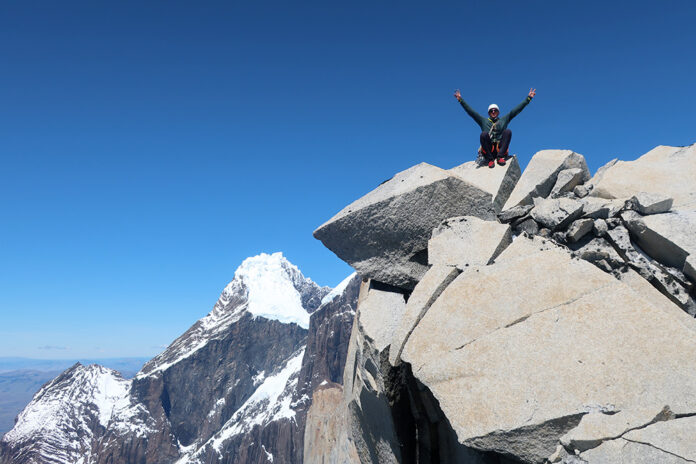 Cristobal Señoret and Juan Señoret from Chile have made the first ascent of ‘Dos Hermanos’ on the NE Face of Cerro Catedral in the Paine massif in Patagonia.

Juan Señoret (34) and his brother Cristobal Señoret (31) have established an interesting new route up the NE Face of Cerro Catedral in the Paine massif in Patagonia. The Chilean mountain guides approached the mountain via the French valley and then climbed the 800m line over a two day period, from 18 to 19 January 2022.

They made one bivouac during the ascent on a huge ledge at circa half-height, and placed 3 bolts during the climb. After summiting in perfect conditions they descended via the line of ascent. The new route, Dos Hermanos, breaches difficulties up to 5.11+, while some of the upper pitches were wet and therefore not climbed free. This is the first route up the mountain’s NE Face, and the first time the brothers have climbed this peak.

The Señoret brothers started dreaming about Cerro Catedral when they climbed Trono Blanco diretly opposite in October 2019, but were unable to return until only recently due to the coronavirus pandemic.

Speaking to planetmountain after their successful ascent, Cristobal stated “The route is amazing. It is long, sustained, and a real adventure providing a good mix of cracks and some face climbing. We are super, super happy.”

How We Discover Our Method

Up and (sky)operating once more. The ISF, unit member of UIAA,...

Russian climbers took all out there medals within the women and...

Tenting etiquette: By no means do that on a caravan park...