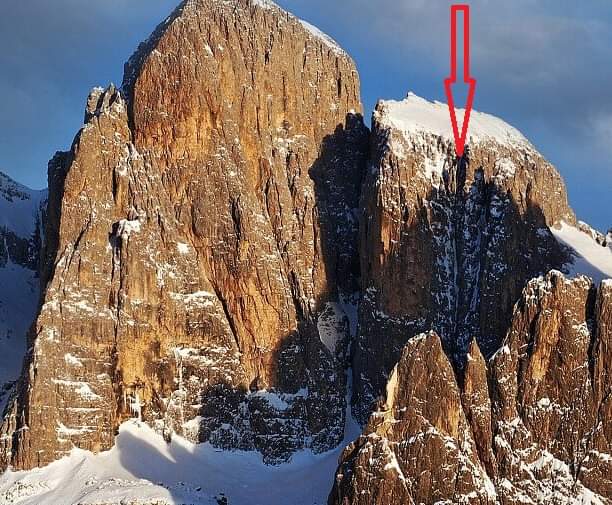 In mid-March 2022 Pietro Simon and I established a new winter climb on Cima Immink in the Pale di San Martino group of the Italian Dolomites. Scivolo del Riky is a gully/couloir that runs entirely up the central section of the west face. An elegant, simple and logical line about 600m high that leads from the base directly to the summit (2850m).

I had glimpsed this possibility while carefully observing the mountain but it seemed impossible that no one had ever climbed it before, especially since the area around the Pale di San Martino is steeped in climbing history. So I got in touch with the most expert local mountain guides and much to my amazement they told me that the gully had never been climbed before in winter.

Armed only just the photo taken through my binoculars and without any idea of what awaited us on the lower section of the wall (not visible in the photo) and where the gully narrowed down, we decided to give it a go. At the base we followed the first simple pitch of via Soleder (UIAA IV) which immediately led to the gully that continues, practically uninterrupted, all the way to the summit.

There wasn’t much snow this season and we had to breach several rocky sections which in normal winters would be covered in snow or ice. The angle varies from 45° to 65/75°, depending on the snow conditions, with some possible mixed sections along the way.

We belayed using trad gear, and simul-climbed some sections; we didn’t hammer in a single peg and the overall result is a logical and pleasant climb in a majestic setting. A route that feels like a classic winter mountaineering outing, without extreme difficulties.

Did A Good friend Die Night time Climbing—Or Was It One...

The Greatest View in Each State

Vandals Strike One among Yosemite’s Most Widespread Trails