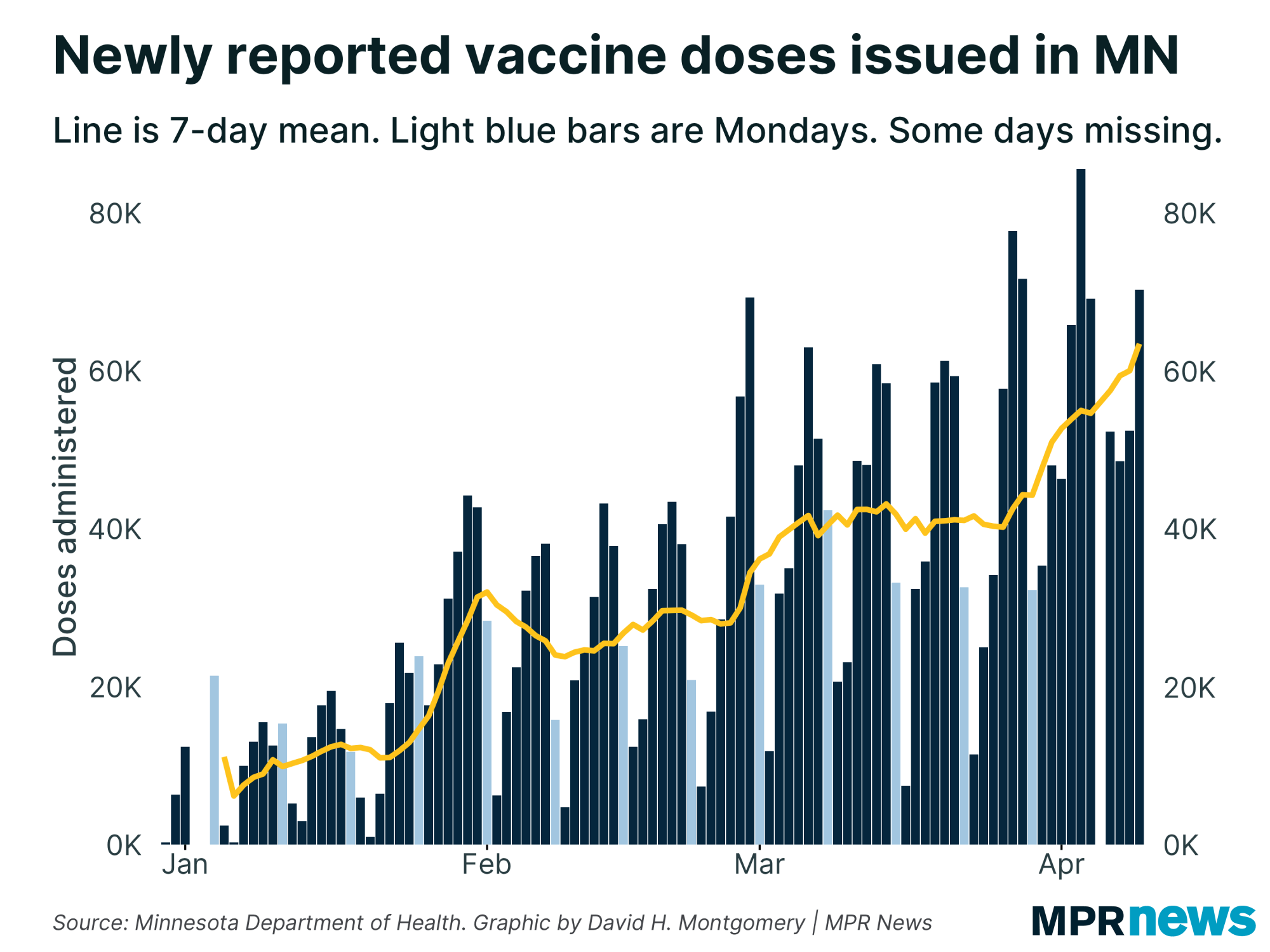 The number of active cases has not been so high since the end of December. Hospital stays and intensive needs rise to where they were in mid-January. The daily deaths are announced in February.

However, there is a crucial difference between winter and today. Minnesota’s vaccination rate is booming. The daily shots hit an all-time high and the state appears to be on track to vaccinate 50 percent of adults within two weeks.

The question that remains to be answered: can the state vaccinate Minnesotans fast enough to stop a sharp rise in the disease as variants gain a foothold in the state?

Health Department data on Friday showed that nearly 1.3 million Minnesotans were fully vaccinated, while more than 1.9 million received at least one dose, including about 83 percent of residents age 65 and over.

The agency reported an additional 70,000 shots. The 7-day trend is the highest since vaccinations began in late December.

Thanks to the vaccination surge, Minnesota is unlikely to see a surge this spring as it did in November and December, but the pandemic is not over yet, Minnesota Health Commissioner Jan Malcolm told reporters earlier this week.

“We’re definitely not out of the woods yet,” added Malcolm, noting that the seven-day positive test rate for the disease has returned to 6 percent. A quota of 5 percent is a warning sign of increasing spread. 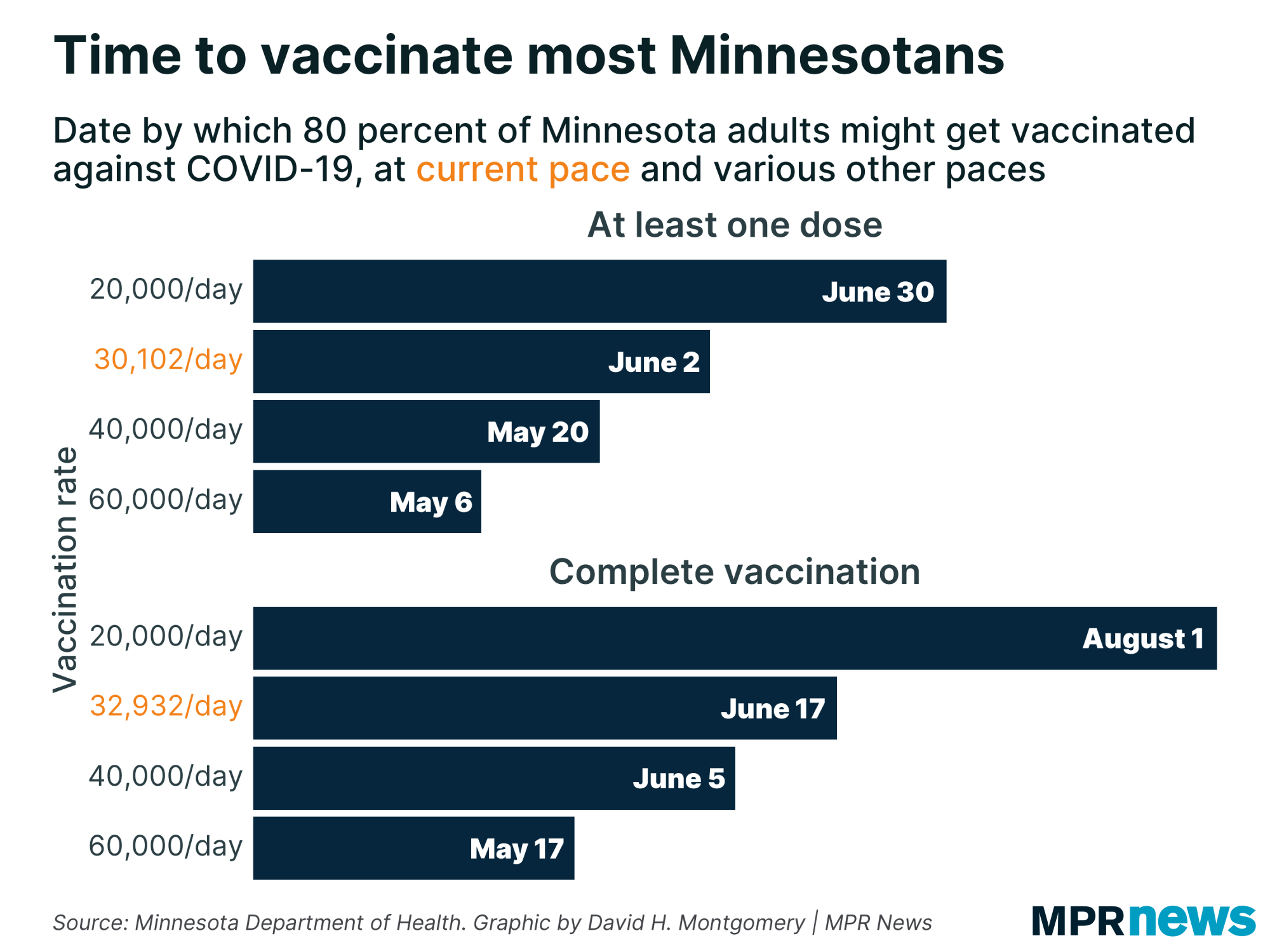 Friday’s COVID-19 numbers confirm Malcolm’s warnings that the pandemic is not over yet.

For example, hospital stays have increased significantly in recent weeks to a level that has not been reached since January. Latest agency data shows 595 people living with COVID-19 in Minnesota hospitals; 134 needed intensive care.

The need in the intensive care unit has doubled in the last month. 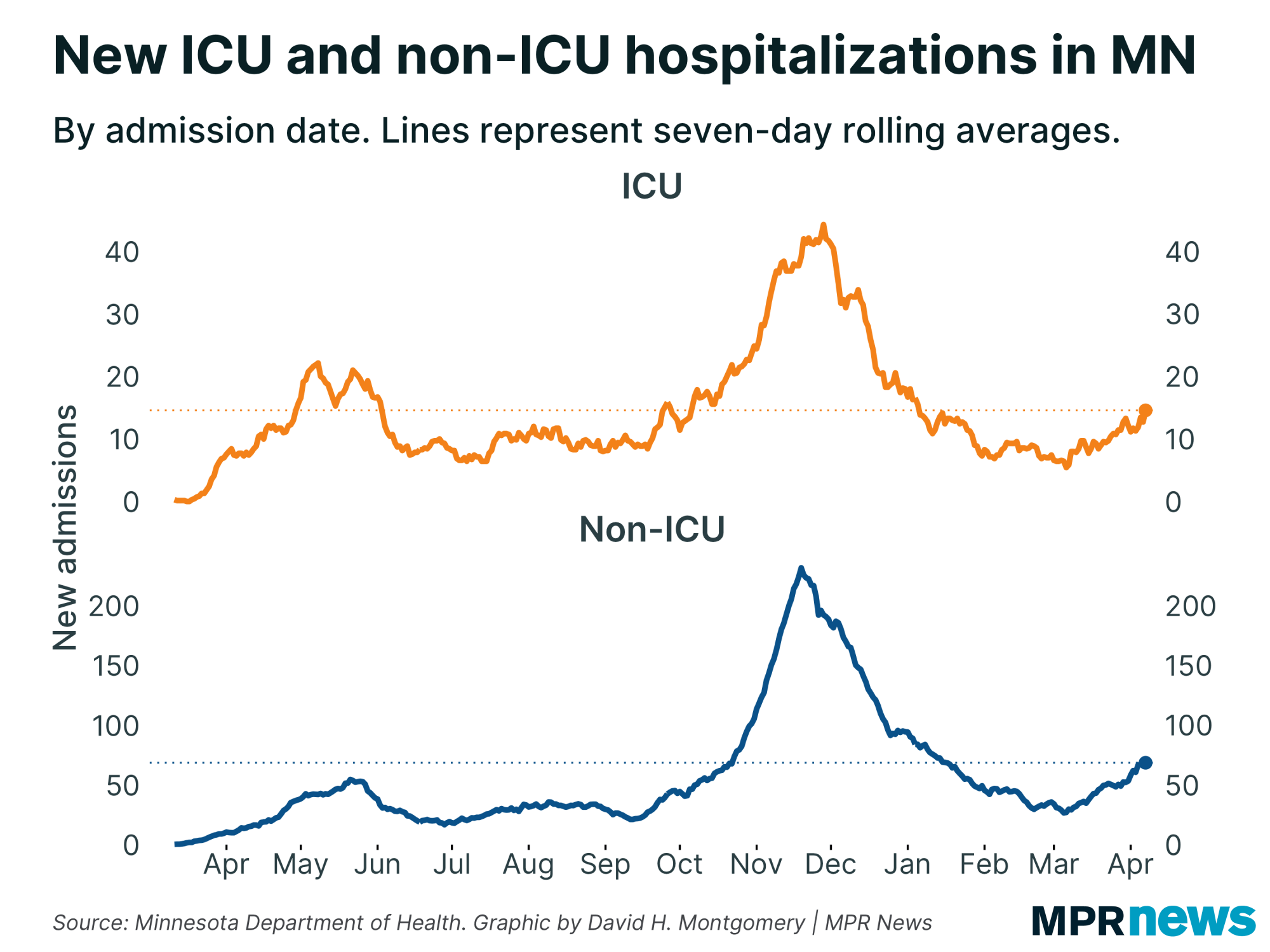 The number of known, active cases has increased in the past few weeks to more than 18,000 according to Friday’s report – more than three weeks with active daily counts above 10,000. 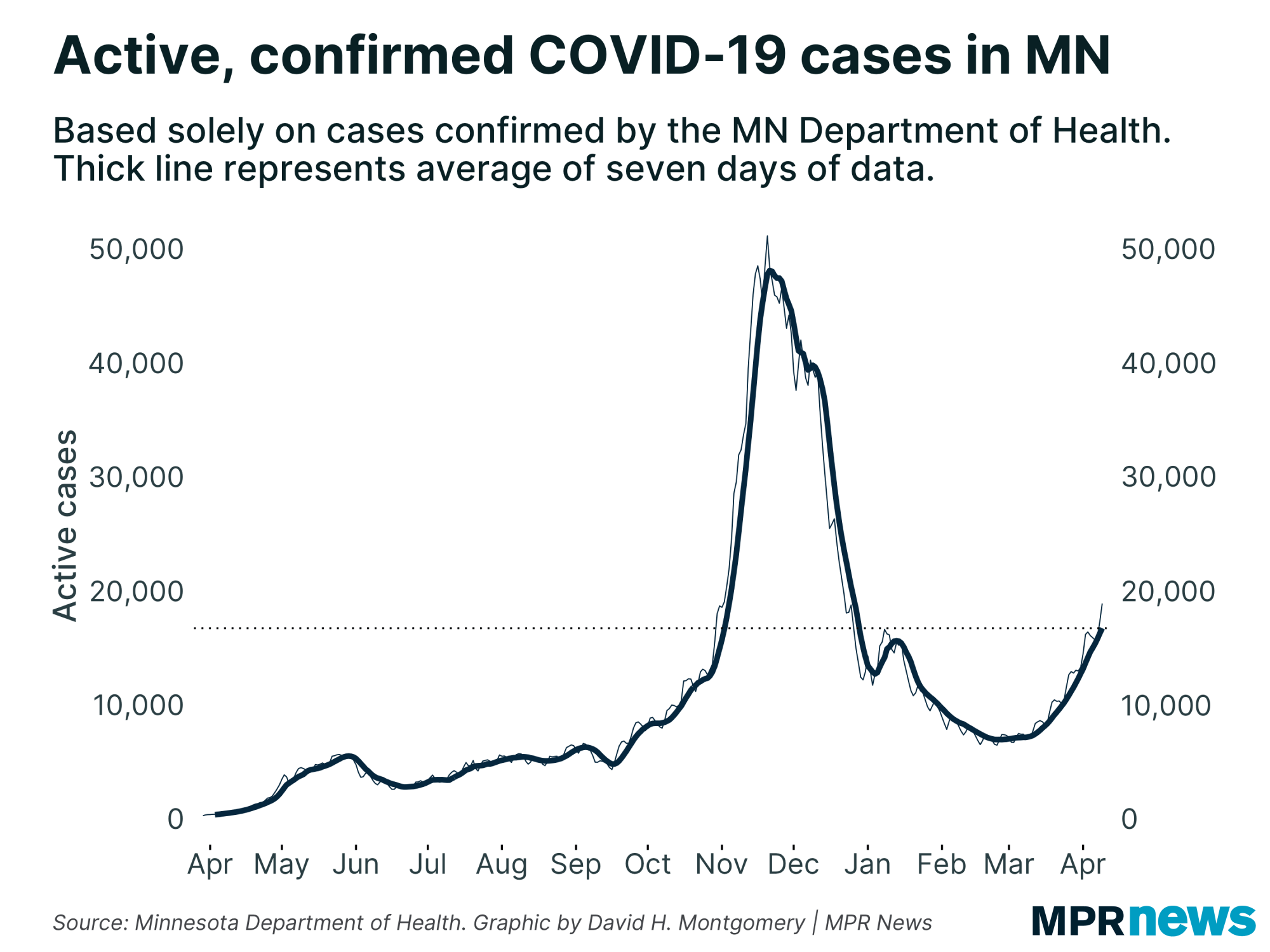 It is also the first time since December that more than 18,000 cases have been active.

Though still low compared to late November and early December, the rising trend is remarkable amid concerns over the rise of the UK’s highly contagious variant of COVID-19, which state health officials suspect is fueling the current boom.

The state has now confirmed about 1,600 cases of the British tribe, Lynfield said Thursday, adding that this is related to five deaths here and is likely responsible for most of the spread that is now taking place.

Ten deaths reported Friday brought the Minnesota pandemic death toll to 6,932. About 62 percent of the deceased lived in long-term care or assisted living facilities. Most had underlying health problems. 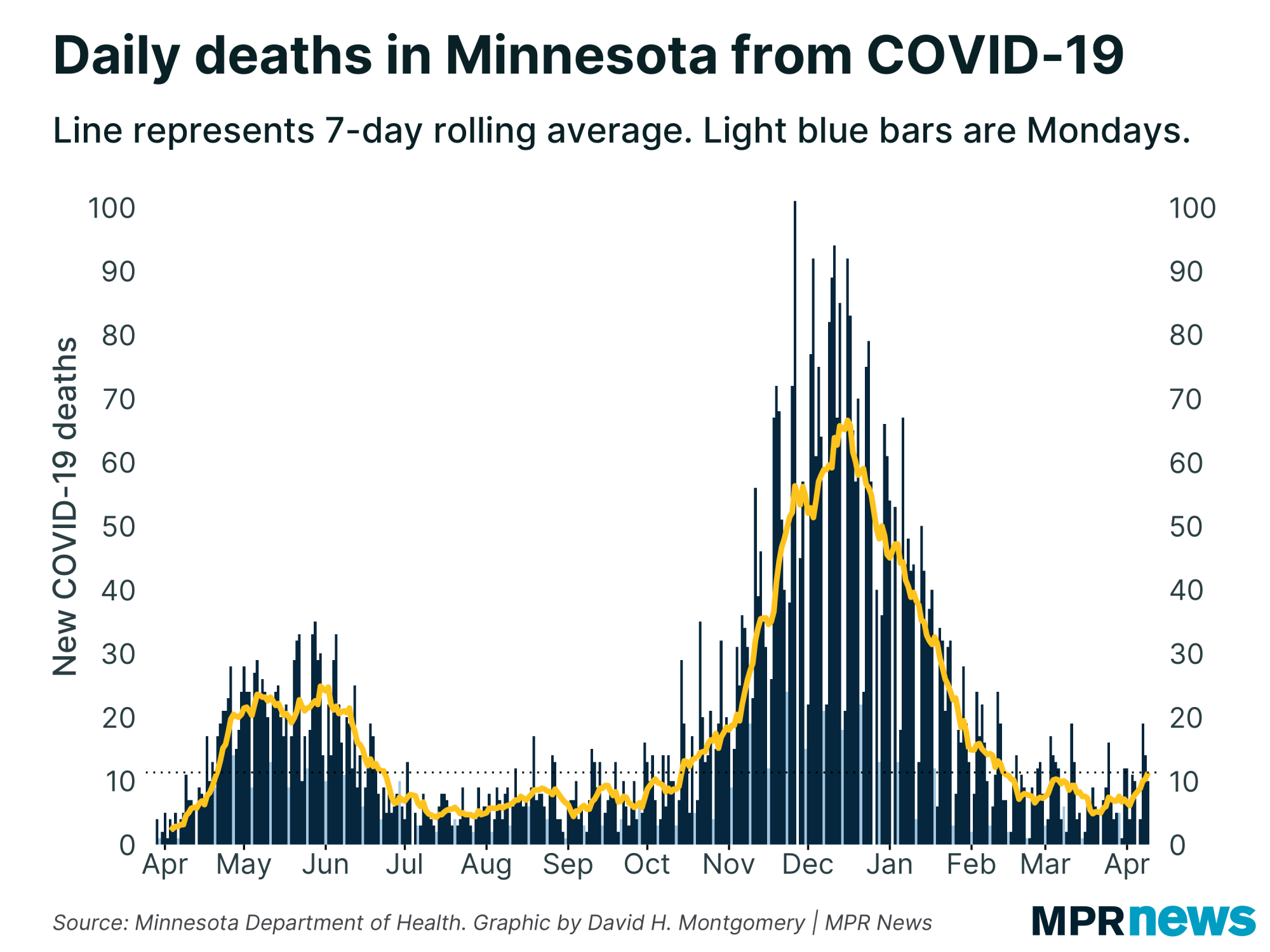 The state has so far recorded a total of 537,828 confirmed or probable cases in the pandemic, including 2,659 on Friday. Approximately 95 percent of Minnesotans known to be infected with COVID-19 in the pandemic have recovered to a point where they no longer need to be isolated. 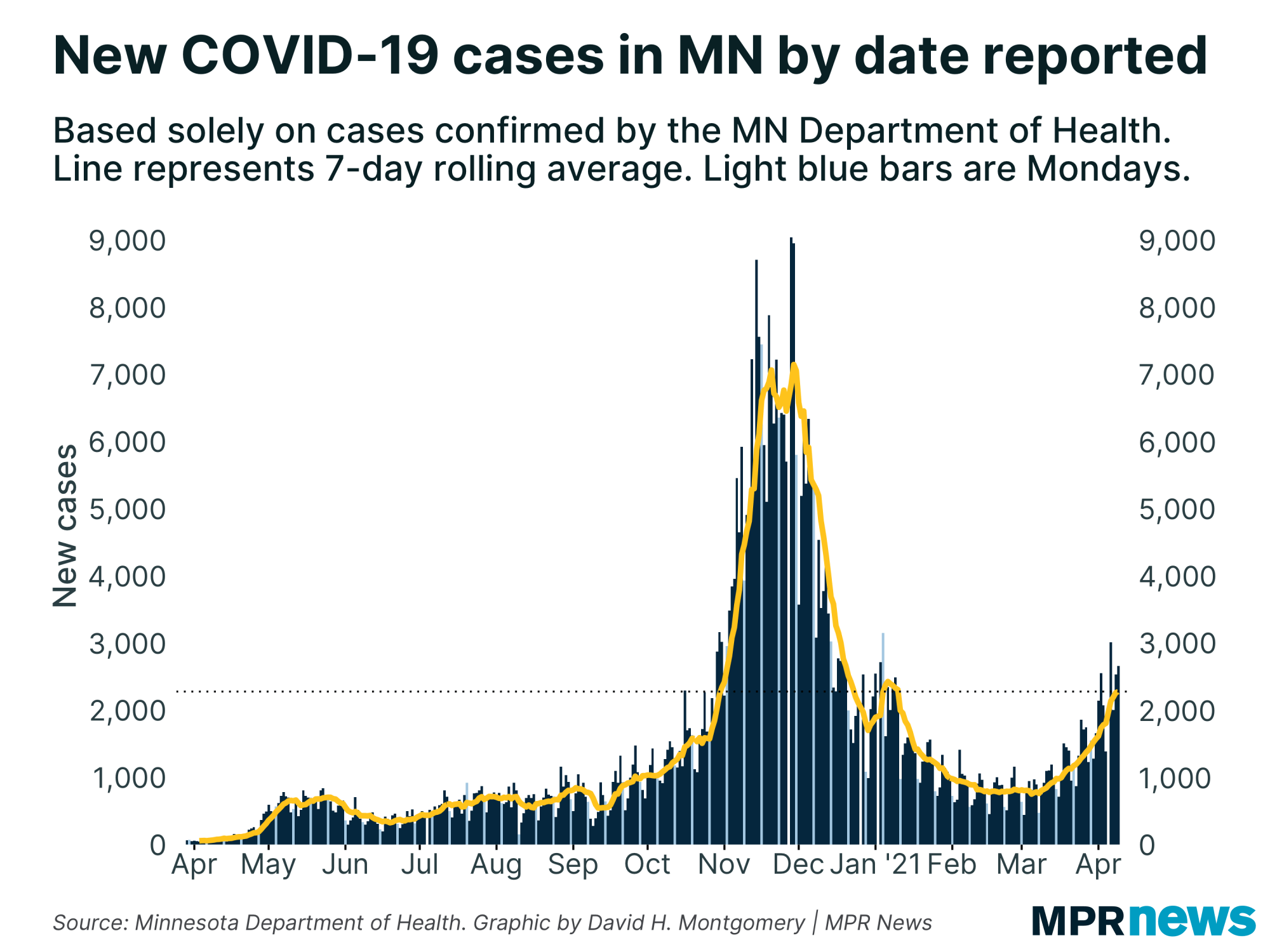 Regionally, all parts of Minnesota are in better shape than in late November and early December. However, the latest numbers show cases that have crept across the state. 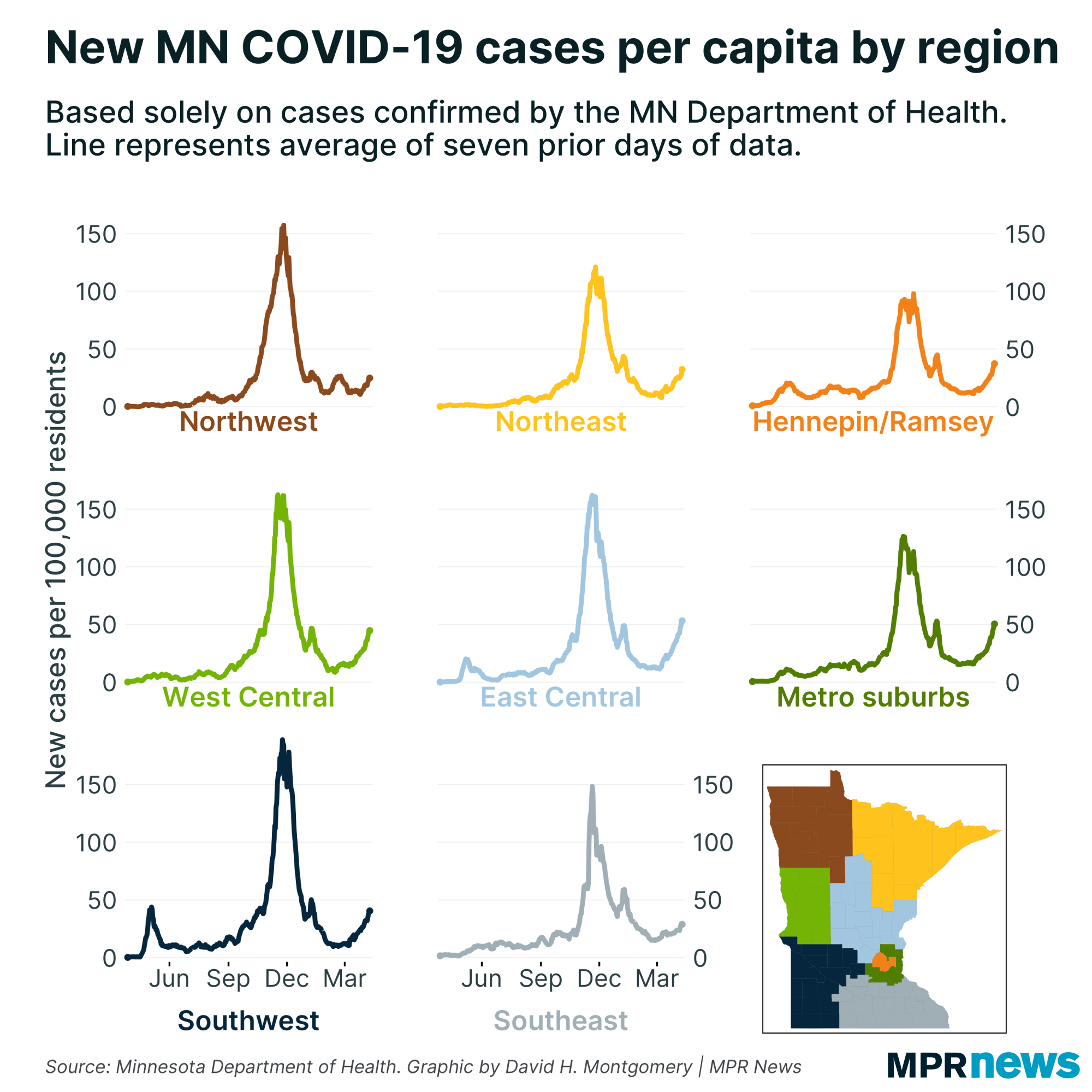 Public health officials continue to monitor clusters that have emerged in recent weeks in the southwestern Twin Cities subway area, as well as Mankato in southern Minnesota, central Minnesota, and around Aurora and Ely in the northeast.

People in their twenties are still the age group with the largest number of confirmed cases in the state – more than 100,000 since the pandemic began, including more than 52,000 among the 20- to 24-year-olds. 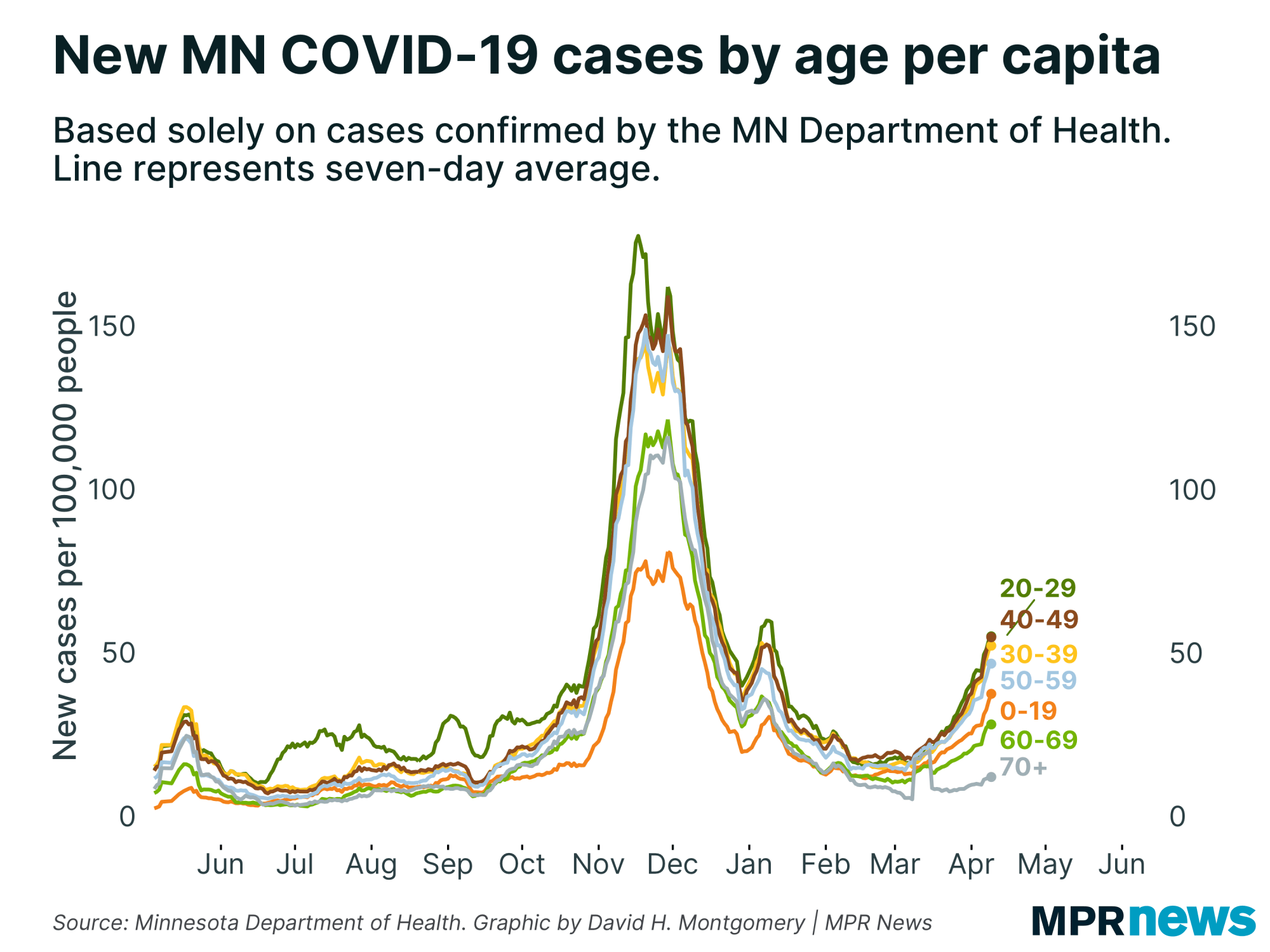 The number of high school age adolescents confirmed with the disease has also increased. Since the pandemic began, a total of more than 42,000 cases between the ages of 15 and 19 have occurred.

As children increasingly return to school buildings and exercise, Minnesota health officials are urging families with children in Minnesota to be tested for COVID-19 every two weeks through the end of the school year.

While young people are less likely to experience the worst effects of the disease and be hospitalized, experts fear they will unwittingly pass it on to older relatives and members of other vulnerable populations. Those with the coronavirus can spread it if they don’t have symptoms.

In Minnesota and across the country, COVID-19 has disproportionately struck color communities in both cases and in deaths. This is especially true of Hispanic Minnesotans, who committed much of the pandemic. 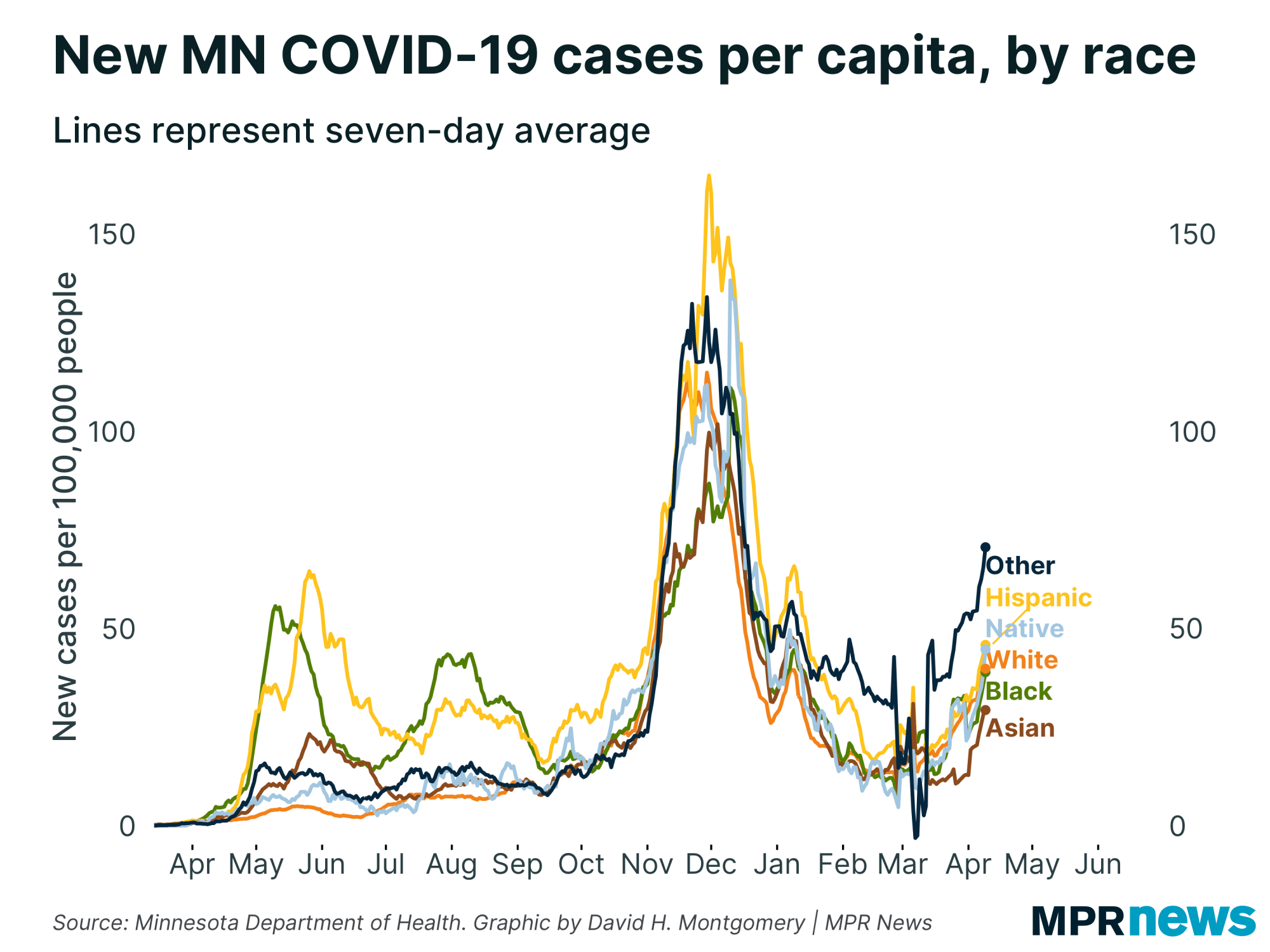 Suspicion of the government, as well as deep-rooted health and economic disparities, have hampered efforts to step up testing among color communities, officials say, especially among unauthorized immigrants who fear their personal information could be used for deportation.

Officials have acknowledged that the distrust of color communities was an issue during the pandemic. They have offered some data on vaccinations, broken down by race and ethnicity, that they update regularly.

The data in these charts is based on the Minnesota Department of Health’s cumulative totals, published daily at 11 a.m. More detailed statistics on COVID-19 can be found on the Ministry of Health’s website.

As vaccine eligibility increases, a southern MN health department recalibrates the following: Human Services at Faribault and Martin Counties, a two-county health department in southern Minnesota, requested 300 doses of vaccine this week. But they are struggling to fill appointment slots – and deal with no-shows. Therefore, they are calling on the state health ministry to reallocate their share.

COVID-19 deaths of tribal elders leave a void: American Indians have the highest COVID-19 death rate of any population in the United States. For tribes working to revive language and culture, the loss of elders to COVID-19 leaves a particularly painful void.

Despite the prospect of aid, Minnesota school budgets are in poor shape: The coronavirus has not only turned classrooms across the state upside down, it has also devastated district budgets, which are largely determined by enrollment. State and state lawmakers are considering and passing billions of new dollars in education funding, but Minnesota counties are still laying off workers and closing schools.

They make MPR news possible. Individual donations are behind the clarity of our reporters’ coverage across the state, stories that connect us, and conversations that offer perspective. Make sure MPR remains a resource that brings Minnesotans together.

Donate today. A gift of $ 17 makes all the difference.

The Greatest Headphones and Audio system of 2021