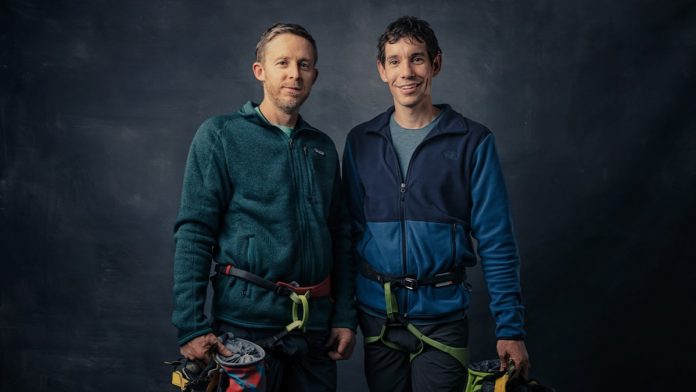 When I learned how to climb in 1998, there was such a scarcity of information on the activity that one could reasonably read everything written on the subject. And I did. I devoured everything from the dozens of classic how-to tomes by John Long to some utterly inscrutable posts by a guy known as Passthepitonspete on nascent climbing internet forums, which I printed out and brought with me on my first trip to Yosemite.

Today’s climbers have the opposite problem: there’s so much information out there that knowing where to begin is as daunting a task as climbing El Capitan for the first time. Now, MasterClass, the online-education subscription service, has jumped into the fray with a rock-climbing series taught by Alex Honnold and Tommy Caldwell.

You may have heard of them. Honnold is the lunatic who free-soloed El Capitan, and Caldwell is the nine-fingered hardhead who spent ten years of his life banging away at El Cap’s Dawn Wall. They’re also two of the most prolific rock climbers of all time, not to mention wonderful, funny people, and they’ve teamed up to accomplish many significant feats, including the first traverse of the Fitz Roy massif in Patagonia, Argentina, as well as a sub-two-hour ascent of the Nose of El Cap with a time of 1:58:07, the current record.

If you’ve ever dreamed of free-soloing El Cap or single-pushing it up the Dawn Wall, then this is the course for you. I’m joking, of course, while simultaneously cringing at the thought of all the gullible chompers out there who might entertain such ill-advised reverie.

Though all of the aforementioned climbing feats are referenced copiously throughout this MasterClass—and bolstered by an archive of video footage that will be familiar if you’ve seen Free Solo or any Reel Rock films—the actual curriculum covers just the fundamentals, from basic climbing techniques to an overview of gear and how to tackle bouldering, sport climbing, and trad climbing.

The course’s 14 classes (each between five and ten minutes) are broken down into tutorials that include Footwork, Climbing Holds, Crack Climbing, and Taking It Outdoors. There are also more lighthearted lessons, like Don’t Be a Gumby, in which Honnold riffs on the “joyous” if “semi-derogatory” term for a beginner climber. He admits he mostly uses the word self-referentially, anytime he makes a “gumby move.”

“If you’re wearing your climbing shoes in the parking lot, you’re doing it wrong, you’re gumbying,” Honnold says, accurately. And while this kind of brusque declaration (classic Honnold) might rub some beginners the wrong way, it quickly pivots to an actual teachable moment: every objective requires the right equipment, at the right time.

What MasterClass is and who it’s for have been the target of a number of interesting cultural critiques, from Saturday Night Live skits to a more serious deep dive in The Atlantic. A subscription to MasterClass costs $15 and provides access to its full library of online courses. Disclosure: I’m a satisfied annual subscriber. (Full disclosure: I’m also friends with both Honnold and Caldwell.) I like it because I can dip into 15 minutes of writing inspiration from the likes of Malcolm Gladwell or David Sedaris in the morning, then learn a new way to roast a chicken from Gordon Ramsey in the afternoon. Of course, I don’t watch these MasterClasses under the delusion that I’m actually going to become a master. But the fact is, high performers are often just inherently interesting, smart people. MasterClass brings you into close proximity to world-class performers. As much as I appreciate learning how to fillet a Dover sole from Thomas Keller, I also love being exposed to his odd quirks as a chef; I’ve watched him go through so much parchment paper on his cutting boards that I suspect he must have paper toilet-seat covers throughout his home.

Honnold and Caldwell’s rock-climbing MasterClass is designed for true beginners. Yet these two have such a good rapport that even advanced climbers would probably happily sit through all of their lessons regardless of whether they learned anything new. You’ll probably chuckle at the sight of two guys wearing helmets to demonstrate sport climbing up an uninspiring choss heap in the middle of nowhere, when you know damn well that they didn’t even wear helmets while taking 100-foot whippers on their speed ascents on El Cap—but it’s still entertaining to watch them go through the motions of being responsible educators.

As a part of its work within the discipline of #climatechange,...

A brand new outside attraction coming to Grand Junction

5 Ideas for Adventuring With Your Canine