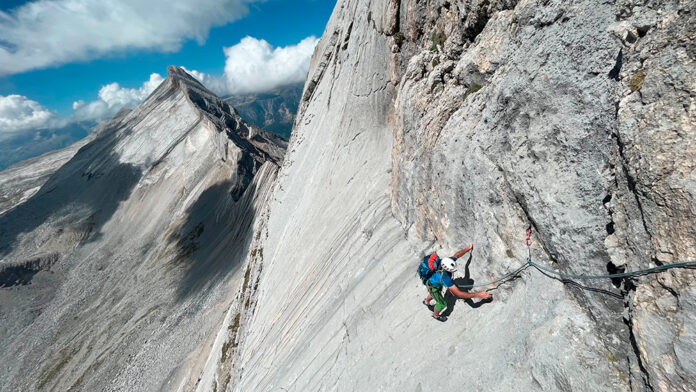 Alpinists Simon Kehrer and Hubert Eisendle from the South Tyrol, Italy, have made the first ascent of ‘La Gana tla Pera’ on the south face of Neunerspitze / Sasso delle Nove in the Dolomites.

The Messner route on Neunerspitze was one of my first routes in the mountains, and I’ve always been particularly fond of this brilliant climb. Although I’ve repeated it countless times in the last 25 years, whether as a mountain guide with clients or privately, I’ve always dreamed of establishing another beautiful line somewhere between the other routes.

I recently repeated the new route Somnium and noticed another logical, direct line slightly to the right. I carefully studied a photo and discovered that in the top third the slab resembles an alien’s face. I didn’t hesitate for long and although at the moment it’s high season, I decided to take a day off. Fortunately, my climbing partner Hubert Eisendle also had time and enthusiastically joined me for this first ascent.

Despite heavy backpacks we quickly ascended from the Lavarella hut to the foot of the wall. From here we easily climbed up rock that was brilliant right from the outset. The climbing is great fun and we soon reached the mythical creature in the rock, in Ladin “La Gana tla Pera”. We climbed directly through this feature and after almost 5 hours we reached the summit ridge, only about 30/40 meters from the cross. Overjoyed for the great climb we enjoyed the breathtaking panorama of our backyard mountains, then abseiled down the new route, collected our few belongings we’d stashed at the base and looked forward to a home-brewed beer in the Lavarella Hütte, the highest brewery in the Alps. And of course some hay schnapps in the Fanes Hütte.

Who will really construct the Greylock Glen out of doors middle?...