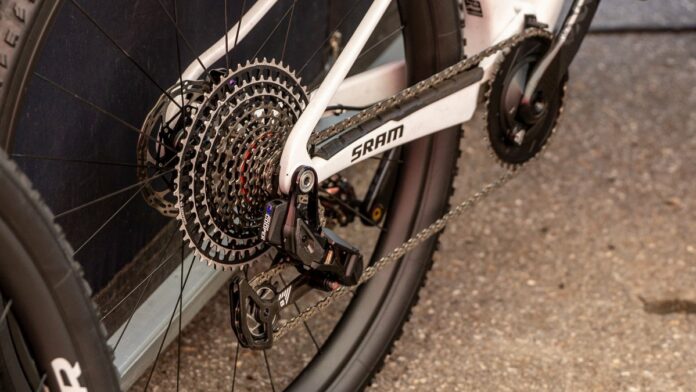 What comes next in the world of mountain bike technology? That’s a question I’ve found myself asking lately, since it seems like the frenetic pace of change in the mountain bike world has slowed down a little. It’s hard to say if this adjustment period would have been as noticeable without the pandemic—supply chain shortages have delayed countless product launches—but either way, the vast majority of the bikes that have been released lately fall more into the ‘incremental enhancement’ category rather than representing dramatic, wholesale revisions.

Personally, I’m not opposed to the more gradual updates. It might not be as exciting to see another Santa Cruz released that looks a lot like all of the other models in the lineup, but if it’s not broken, why fix it? Mountain bikes have evolved to a point where it’s hard to imagine what type of change could come along that would be as dramatic as the introduction of disc brakes, suspension, or dropper posts. I suspect we’re approaching an evolutionary plateau, a time when the focus shifts more towards refinement rather than reinvention.

Don’t get me wrong, there are plenty of new products on the horizon, it’s just that I don’t think they’ll alter the riding experience to the same extent as some of the larger advances of the past.

How Did We Get Here?

Geometry has progressed dramatically over the last decade, and today’s bikes are all the better for it. The steep and short 26″-wheeled bikes of yesteryear look like children’s toys next to the longer and slacker options they’ve been replaced with, and the performance benefits that the updated geometry has brought are very noticeable, especially when descending.

However, there is a point at which bikes can’t get any longer or slacker (Grim Donut excluded). Sure, someone could make a 100mm cross-country bike with a 62-degree head angle, and while I’d be really curious to give it a try, it’s unlikely that would ever catch on. Bikes are still being released that are longer and slacker than their predecessors, but the changes aren’t quite as drastic—lately it’s been half-degree head angle changes here, a slightly longer reach there, which I’d say is an indicator that we’re getting close to the limit. After all, climbing is still a large part of the mountain biking experience, and trying to pilot a big barge of a bike around a tight, technical climb isn’t going to be everyone’s cup of tea.

The wheel size debate has pretty much subsided too, with most companies settling on some combination of models with 29″ or mixed-wheel setups, with a 29″ wheel up front and a 27.5″ rear wheel. That’s caused some consternation amongst the 27.5″ 4 Lyfe crowd, but I do think the mixed-wheel configuration makes a lot of sense on longer travel bikes. I was skeptical at first, and I still throw up in my mouth a little bit whenever someone says, “It’s the best of both worlds,” but after riding a decent number of mixed wheel options I’ve come to appreciate their handling on enduro and DH bikes, especially in steep terrain. It’s also an option that can be offered relatively easily on a bike, since going to a smaller rear wheel is a whole lot simpler than going to a bigger one when it comes to frame clearance.

To that end, we’re seeing more adjustability built into bikes—Specialized’s Stumpjumper EVO is a prime example of how to make an incredibly adaptable bike, and the recently launched Trek Fuel EX seems to take a page out of that playbook. Giving riders the ability to steepen or slacken a bike’s head angle by a meaningful amount, and to raise and lower the bottom bracket height is a great feature. Sure, plenty of riders won’t ever deviate from the stock setting, but for those that want to tinker, or fine-tune their bike for a trip to a different riding zone it’s a great option, and acts as a way to future-proof a frame’s geometry.

As radical geometry chances subside, it’s going to incentivize companies to look towards new features to help their new models stand out from the old. (In-frame storage, anyone?) Again, this isn’t a bad thing—there’s no rule that says the next model of a particular bike has to be longer and slacker than the one before, even if that’s pretty much always the case. Personally, I think it’d be refreshing to have a company say, “We nailed it with the geometry on this bike, so we’re leaving it alone for the foreseeable future… and adding an aluminum version into the lineup.”

What about e-bikes? That’s a whole other can of worms, but it also happens to be where a lot of product development is taking place. That makes sense given how well modern mountain bikes work, and how much room for improvement there is in the battery/motor department on an eMTB. Love ’em or hate ’em, e-bikes are a part of the landscape now, and they’re only going to become increasingly common, especially as more relatively light mid-power options are released.

Of course, as I’m writing this there’s probably someone out there toiling away in their garage on the next best thing, a drivetrain that never needs to be adjusted, or tires that are impossible to flat. I’m all for innovation when it leads to improvements, no matter how big or small. Even if there aren’t any massive upheavals to mountain bike design in the near future there are still more than enough areas with room for refinement.

A Buyer’s Market Could Be On the Way

A slower pace of change means that riders with bikes that are a few years old won’t feel like they’re missing out on something special every time a new model is announced. It’s all too easy to start feeling that new bike envy, but it’s a lot easier to keep those feelings at bay if the latest and greatest doesn’t look like it’s much different from what you currently own. Sure, a storage compartment in the downtube is handy, but for many riders that’s not going to be enough incentive to rush out and upgrade.

In addition, a wave of newcomers entered the world of mountain biking over the last couple of years. While many will be in it for the long haul, others may not be as sold on the sport. What does that mean? Well, as supply chain issues subside and the used market starts to fill up with bikes from riders trying to offload their pandemic purchases, a buyer’s market could be on the horizon. Despite all the doom and gloom in the financial world, it might be prime time to score a good deal on a bike that won’t be outdated any time soon.

A courtroom ruling on sleeping — not tenting – Chico Enterprise-Document

Jim Cramer Would not Perceive Why This Inventory Down 55% In...

Dwell Out Your ‘Oregon Path’ Tenting Fantasy in This Classic Conestoga...