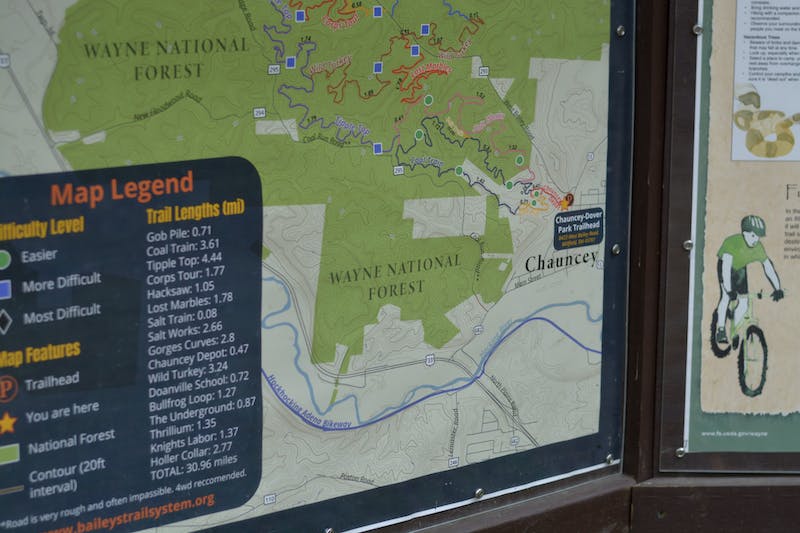 As a governing council that includes the City of Athens, Village of Chauncey, Village of Buchtel, City of Nelsonville, Athens County, and York Township, ORCA’s mission is to harness Appalachian Ohio’s outdoor recreation space, diversify the regional economy, and provide sustainable resources for Ohioans represented in the organization.

In a statement released by ORCA, Jessie Powers, the organization’s executive director, wrote that the need to diversify Appalachia, Ohio’s regional economy has become critical, but these challenges are opening new avenues for rural economic development.

“The critical need to diversify our local and regional economies has come under much focus in recent months, but these challenges are opening up new opportunities and novel approaches to rural economic development,” Powers said in the statement.

The Baileys Trail System is a multi-county project consisting of an 88-mile system of single-track trails that accommodate mountain bikers, trail runners, and hikers of varying skill levels.

The trail system was proposed in 1993 by a group of outdoor recreation investors who recommended creating a 16-mile mountain bike trail leading to Wayne National Forest.

In May 2017, the Baileys Trail System was selected as the National Forest’s first conservation funding pilot and initial plans were drawn up. This led to its construction and continued development as an outdoor attraction.

“The last time I was there was probably a month ago and I was on a trail run with my teammates,” he said. “It was amazing … we drove there and ran through the woods as the sun came up — we ran five miles so it took us maybe 40 minutes.”

As a board member of ORCA, Athens Mayor Steve Patterson works directly with Powers. Patterson said most meetings typically begin with discussions about funding sources, land use, and most recently, grants from the Appalachian Community Grant Program.

“We’ve had a lot of discussion about whether or not ORCA should apply for implementation funding from the Appalachian Community Grant — that’s the half billion dollars that the state has allocated to Appalachian counties,” Patterson said.

Currently, ORCA receives its funding from investors, private and public companies, and the Ohio Department of Natural Resources or ODNR. It has also thrived by creating its pay-for-success model for interested donors.

“The way pay-for-success works is you’re looking for investors who want to invest in something like outdoor recreation, but you have a sustainable way of making sure the investors are getting a decent return for see their investment,” Patterson said.

As additional funding, the Athens City Council approved a $90,000 annual contribution from the city’s guest tax to cover the costs associated with running the trail system.

ORCA also has a partnership with OU’s Outdoor Pursuits, an educational program that provides opportunities for leadership, experiential learning and healthy outdoor recreation.

Cody Lennon, associate director of Outdoor Pursuits, said his partnership with ORCA is primarily based on its rental program, which allows students to purchase mountain bike gear at a significantly lower price.

“What ORCA is doing is absolutely incredible and we support it,” said Lennon. “What ORCA could do… (was) give us 15 bikes to rent in Ping. This will open in the spring so students can rent $3,000 worth of mountain bikes for $40.”

Regarding the future of ORCA, Patterson said the council is interested in opportunities to expand the organization outside of Athens County.

“I see us expanding into Washington County and into Morgan County, Perry County, Denton County (and) Meigs County,” Patterson said. “I[want]us all to come together and have one central organization that helps these surrounding counties and beyond with some of the outdoor recreation facilities that we know we have in Southeast Ohio.”

Learn how to make a Paracord "double" Carabiner Keychain Lanyard –...