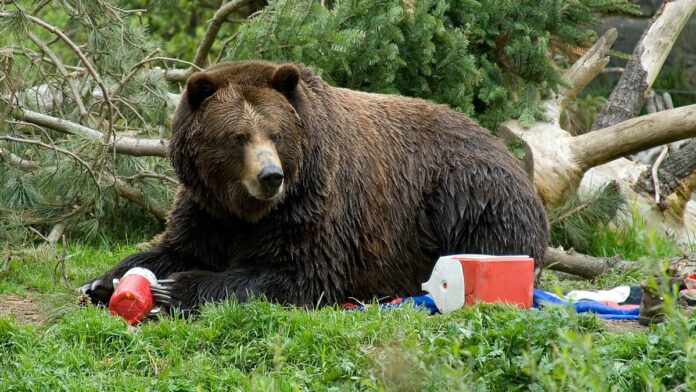 If you spend enough time in the great outdoors, you’re bound to have an encounter with a wild animal or two. Here are our favorite stories of coming across boars, dolphins, mountain lions, and other creatures in the wild.

One late-summer evening in 2011, my coworker Ali and I took her two dogs—a Rhodesian Ridgeback mix and a Boxer mix—for a post-work hike up Tesuque Creek trail near Santa Fe. As we rounded a singletrack ridge, the dogs took off down to the gully below, barking bloody murder. Branches popped, cracked, and shattered in the thicket. “Holy shit, Ali,” I said. “That was not a squirrel.” She screamed at her dogs to come back, and then we looked up. Eight feet away, a massive female mountain lion crouched in a tree while the dogs jumped and clawed at its trunk. In a split second, we did what only idiots do. We ran like hell—flat out. This is how I’m going to die. Right here, right now, I thought, refusing to look back. An eternity later, we reached her car gasping, swearing, shaking. The dogs were hot on our heels. That night, we notified local wildlife control while we drank Heineken tall boys. I dreamt I bought a gun. The next day, I wrote a story about it for Outside’s old K-9 blog, and I interviewed a guy, who, at the time, had hunted mountain lions in the area for 25 years with packs of at least ten dogs. He’d never seen a mountain lion treed by just two, he said. “You’re lucky to be alive.” —Patty Hodapp, contributing editor

Love Is Such a Boar

Warthogs hold an almost spiritual importance to me, and I will admit that this is a fairly new development. I’ll set the stage: It’s January of 2022, and I’m gazing out into the South African bush. I’m at a cozy little lodge on a private reserve just outside of Kruger National Park, which Outside named as a Best Trip for 2022. (I’d have to agree.) My girlfriend is getting a rooftop massage, and having just had one myself, I am enjoying the dreamlike bendy stupor that follows such treatment. I’m sitting at a table decorated with grapes and cheeses, and topped with a bottle of champagne, watching the wind play with the knee-high grass mere feet away. I feel completely at peace—a good sign, I think—as I am moments away from proposing to my girlfriend. When the moment arrives, the words come out quickly (I can’t recall what they were.) But I do remember how I felt seeing her across the table, and of course, that she said yes. As we pull our chairs closer—an adult female warthog emerges from the grass. Then comes two young warthogs, followed finally by dear ol’ dad. My new fiancée and I stand there mesmerized, our initial shock having given way to wonder. Yes, the warthogs wanted our fancy French cheese. To this day, you cannot convince me that these wild animals didn’t give us their blessing. My fiancée and I will be getting our magical warthog tattoos very shortly. —Tyler Dunn, audience engagement editor

I’ve always been terrified of sharks (thanks, Jaws 3!), and my irrational fear followed me to college at the University of California, Santa Cruz. I was hell bent on overcoming my willies to become comfortable in the ocean, and thus dedicated myself to as many pelagic activities as possible. I enrolled in the surfing class and went on ocean swims with my teammates on the NCAA swimming team. After several years I was able to block any visions of sharks and dorsal fins and danger to the back of my mind whenever I got in the water. All that changed one afternoon during my final year at school. A friend coerced me to swim out and around a sunken ship at Seacliff State Beach. We were pretty far offshore when I looked up out of the water and—gah!—saw what I thought was a dorsal fin poking out of the waves. I told myself it was just my brain playing tricks on me and put my face back in the water. A few seconds later I looked up again and saw the unmistakable curved shape of a dorsal fin in the water, and it was moving toward me, fast. I flipped around and began sprinting toward the shore, and likely broke my PR for the 500-yard freestyle. When I felt sand beneath my hands I turned around to look at my pursuer. I saw one fin, then two, the five—a pod of dolphins was lazily paddling along the pier. —Frederick Dreier, articles editor

A City Slicker, Cowboy, and a Beaver Walk Into a Campsite

The first year I moved out west from New York City, some new women friends took me backpacking in southern Colorado. Suffice it to say that I was ill-prepared. I wore new hiking boots and had blisters covering my feet an hour into the trek. Once we reached our campsite, located at a lonely stretch along a river, I was chagrined to learn that I’d be sleeping in a tent by myself. I felt much safer in a bustling city with screaming sirens echoing down every block, than in a tent alone way out in the wilderness. As we cooked dinner, there was much talk about bears, like how to store our food in bags up in a tree, and what to do if one came during the night. As that conversation was taking place, a burly looking man who’d been out horse packing rode by slowly, staring at us. As I recall it, he didn’t say hello. (This may have been because he was up on a ridge and we were down in the valley, and it was dusk so it was hard to see, but still.) For obvious reasons, I didn’t sleep that night. As I fretted about the horseman coming back to murder us, I started hearing something splashing across the river multiple times. I heard big loud splashes, like someone doing a cannonball into the water. I thought it was a bear that had smelled our bags of food dangling too low in a tree and too close to my tent. I didn’t want to yell out to my friends for fear of attracting the bear even more. So I suffered in silence until first light, when I peeked out to find my sleepless friends looking around for signs of a bear. After a series of “Did you hear that all night?” conversations, we started poking around to see if our food was gone. Then there was another huge splash in the river. We looked toward it and the most adorable, industrious beaver looked back at us. He’d been hard at work building a dam all night. —Mary Turner, deputy editor

For years I lived on an agrarian Italian island southwest of Sicily, and my regular running route would take me past fields of wild carrot, grapevines, and olive trees, and past fallow plots occupied by an occasional donkey. One morning I passed by a herdsman I knew who was pasturing two dozen goats by an old church. I called to his dogs—I was friendly with them—and before I knew it, the entire party turned in my direction and began trotting downhill toward me. I picked up my pace, because those goats were nearly my size (I’m only five foot one) and, en masse, they intimidated me. But it must have been a sight: a fleet-footed woman followed by a group of smelly, googly-eyed goats, two massive barking dogs, and, after them, a hollering herder. All I needed was a flute. —Tasha Zemke, associate managing editor

Pennsylvanians inspired to guard themselves in opposition to tickborne ailments when...