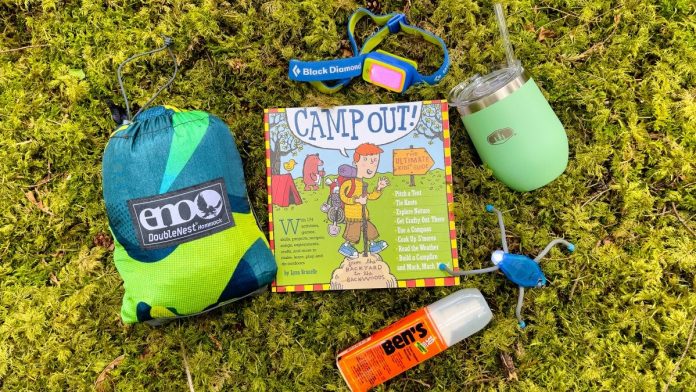 Camping with kids can be really fun. It can also be a downright disaster. I’ve learned how to camp with kids the hard way. Parent failures include: forgetting sunscreen, not packing enough warm clothes, and falling short on stuff to occupy young minds. Tears have been shed by all those involved, but along the way I’ve picked up some tricks on how to make such outings more successful for everyone. So when you’re packing for your next weekend in the woods, remember the little things, like their favorite stuffed animal that they can’t sleep without or a special cup that they only drink water out of—but don’t forget about yourself. Here are six items that I pack that make camping with kids an all-around better time.

The BugLit is a micro light that doubles as a fun insect toy. In addition to illuminating a bedtime story, it can become a bracelet, backpack charm, zipper pull, and whatever else my child dreams up, thanks to a tiny S-biner and flexible, grippy legs that can be bent into different positions. With one button and four settings—high, low, flash, and momentary—it’s simple enough that little kids can figure it out without getting frustrated. It’s weather-resistant to withstand what I consider standard outdoor kids play: I don’t expect this to survive a swim in the lake, but a bit of rain won’t damage it.

I like this item because it keeps my son engaged with nature; he finds all sorts of ways for this little bug to interact with its surroundings. He molds, twists, and hangs his BugLit onto tree branches, small rocks, and his own body, distorting it into all sorts of fun shapes.

On a single charge, it lasts between four hours and a full day, depending on how much toggling between settings kids do, and it recharges in about an hour and a half with a micro USB (not included). The rechargeable version doubles the light power of the battery-operated BugLit, with 12 lumens on the high setting and two lumens on the low and flash settings, so it’s not as bright as a light from a headlamp, but it’s still bright enough for most kid tasks around camp.

The DoubleNest is perfect for afternoon naps and reading books, and it’s a comfortable place for adults, kids, and even the family dog to enjoy some downtime. For an adult and two small kids, it’s spacious; for one person, it’s like having a king bed all to yourself. The nylon is soft—really soft—and it’s cool against the skin in warm weather. Once you find the ideal location, like perched above some water or nestled among the sounds of the forest, you won’t want to get out.

Because it compresses down to about the size of a cantaloupe in its stuffsack, this is a no-brainer for car camping. I even think it’s worth bringing on short backpacking trips, given what a luxury it feels like. The DoubleNest comes with a set of carabiners, but straps are sold separately. I set mine up with the Helios XL Ultralight suspension system ($45), and in the right conditions, it takes less than a minute; this system is secure, requires no knot tying, and allows you to easily make fine-tuned adjustments that result in the perfect hang. It’s so simple, it almost feels like you’re doing something wrong.

I haven’t yet spent the night in this hammock, but I look forward to it; I’ll probably get the bug-net add-on, though. Finally, I also really like the variety of colorful patterns to choose from, which I think adds a nice element to family camping photos, however silly that may be.

Part field guide, part activity book, part storybook, Camp Out!, by Lynn Brunelle, is a great resource for kids to take along camping because it’s full of ways to keep them interested and occupied. From knot tying to s’mores recipes and from making camp to finding constellations in the night sky, this book brings the fun factor and is packed with how-to instructions, outdoor crafts, games, projects, experiments, stories and more. It also touches on Leave No Trace principles, trail markings, bear safety, and other useful info kids need to know to become responsible adventurers.

Though this is recommended for ages seven and up, my toddler has already gotten a lot of value out of it, and I think there’s enough variety within its pages to keep kids of all ages entertained.

Black Diamond’s full-spectrum LED Wiz headlamp is bright enough to serve its purpose for my child, which is generally playing around camp after dark or bedtime reading, but it’s not so bright that it blinds me in the eyes (it’s rated 4 to 30 lumens). In addition to being great for making shadow puppets in the tent, it has also proved invaluable for those inevitable middle-of-the-night bathroom visits.

Adults will appreciate how kid-friendly and easy to operate it is, with four different modes—white, color, dimming and strobe—all of which my almost four-year-old can work without my help (a big plus in my book). The lamp tilts up and down, so it functions even when it’s haphazardly thrown on upside down—a real perk that pleases my toddler, who is all about independence. The lamp does fully detach from the band, so be mindful if that’s a deal breaker.

The Wiz also makes going to bed more fun. Sticking to any semblance of a bedtime routine can be a challenge when camping with kids, but use the color-changing feature to entice your kids into the tent with the promise of a cool light show, set it to cycle through the colors, and watch the walls light up like a rainbow. Now they’re inside and you’ve won half the battle.

This one’s for the adults. When you’ve finally got your kids tucked in to their sleeping bags (bedtime be damned), it’s time to relax with your favorite beverage. The Glacier tumbler is vacuum insulated and versatile: I’ve used mine for hot cups of coffee and ice-cold cocktails (I like to fill it with a splash of bourbon and a couple ice cubes that are floating around the cooler). The Glacier comes with a reusable BPA-free straw, but my favorite thing about this tumbler is a clear sliding lid that prevents spills and seals my drink off—so when I have to go back into the tent to settle my kid, I know that my next swig won’t have a bug in it.

Nothing kills the fun of camping faster than a swarm of hungry mosquitos or a tick bite, which is why I always toss a bottle of insect repellent in my bag. It’s one of those items that you don’t really need until you really need it. I’ve had camping trips completely ruined because I forgot to pack insect repellent during peak bug season. It’s one thing to put yourself to bed covered in itchy bug bites, but when it’s your child covered in them, the parental guilt is real.

Safe if used correctly, deet is the most widely used insect repellent around, and I’ve found that Ben’s 30 Deet Wilderness Formula is extremely effective at keeping the bugs away. I also like that I can get it in a spray bottle. (Note: According to the label, this product is not for use on children under 12 years of age.)

These Nationwide Parks Are Lifting Reservations for Fall

This Is What It Feels prefer to Be an Olympic Runner

A Russian Climber Flew a Ukrainian Flag on Mount Everest and...