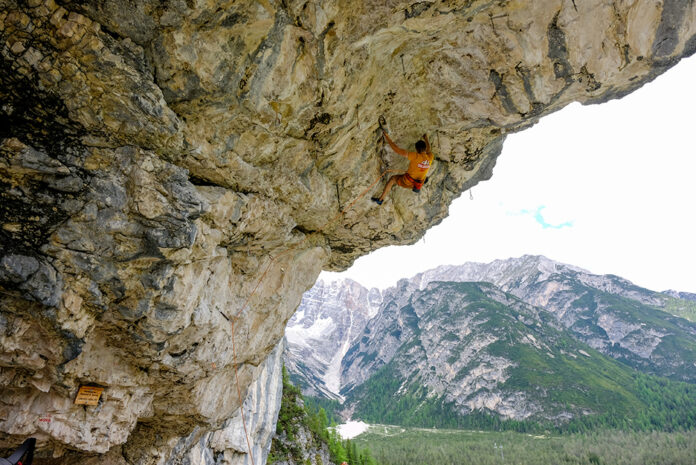 The Dolorock Climbing Festival that took place from 27 – 29 May in Val di Landro / Höhlensteintal proved to be a great success, with over 200 climbers taking part in the great climbing meeting of the Dolomites.

The Dolorock Climbing Festival, organised by the local ‘Gamatzn’ climbing club, took place on the crags around Toblach from 27 to 29 May 2022. More than 200 climbers from 12 countries took part in the meeting, which began on Friday with a drive-in cinema at Toblach and ended with the usual brunch on Sunday morning. Many more showed up to the party on Saturday night, with climbers celebrating and dancing until the early hours of the dawn.

The Red Point Fight saw all climbers giving their best on Saturday at the numerous crags in Val di Landro. Andrea Prünster won the pro female category, ahead of Johanna Ratschiller and Mariapia Ghedina. The pro male category was won by Alex Walpoth, followed by Janluca Kostner and Mathias Senfter. Victory in the junior girls category went to Alina Benazzi, while the junior boys category was won by Elias Hopfgarnter. For the first time ever there was a children’s ranking (U14), won by Maya Oberhofer and Piergiulio Paglierani. 50+ men and women also received prizes.

Since the main objective of Dolorock is to combine climbing and fun, once again the climbers who came closest to the average score received a prize, as well as those who climbed the most routes.

After the awards ceremony, the Dolorock Climbers Party took place and continued late into the night. The legendary event, like every year, was organised by the Dobbiaco Cultural Club. On Sunday, the festival concluded with a climbers brunch and Yoga for Climbers right next to the campsite in the Dolorock area.

Dolorock Climbing Festival
Organised since 2013 by Gamatzn, the South Tyrolean climbing club that brings together climbers and mountaineers of Val Pusteria, Dolorock aims to use climbing to overcome linguistic, cultural and geographical barriers. The meeting is designed welcome diversity, promote tolerance and nurture critical discussions on issues related to climbing and mountaineering