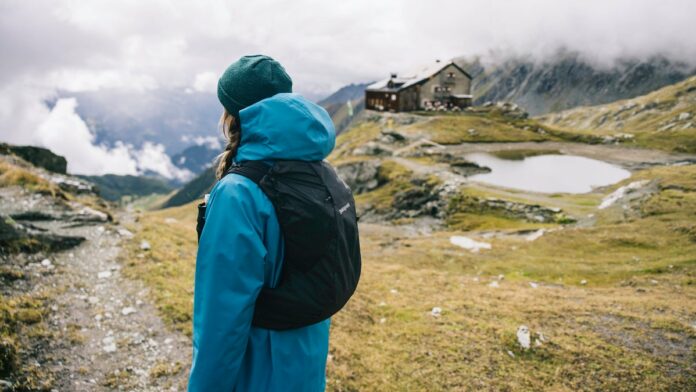 As I crested my second col of the day and peered down at the 3,000-foot valley ahead, a gust of wind chilled me instantly after the effort of the climb. Knowing the descent down the switchbacks to a small rifugio could be a cold one, I pulled a windbreaker from my pack. Halfway through a quest to run Alta Via 1—also known as the Dolomite High Route—in three days, I was grateful for the volume of the Slope Runner Exploration Pack ($179) that Patagonia had lent me to test for a few months.

My route spanned nearly 100 miles across the Italian Alps, with more than 26 thousand feet of elevation gain and loss, which meant I had to move fast and light. Thankfully, the trail passes more than a dozen huts where I could refill water, load up on butter-heavy calories, and bunk for the night—allowing me to pare down my kit to the weight of a typical day pack. Still, my mission required considerable essentials: poles, raincoat, puffy, buff, gloves, sunglasses, headlamp, stroopwafels, electrolytes, two 500m flasks, first aid kit, InReach satellite communicator, emergency shelter—and the much-appreciated windbreaker.

The run was an ideal setting for testing the Exploration, a new 18-liter vest-pack hybrid built on the fundamentals of the brand’s existing Slope Runner series. This version carries on the line’s tradition of keeping things simple and highly functional, while expanding the storage capacity by more than double the volume. The pack has a large main compartment, four front pockets on the shoulder straps, one hidden zippered pocket, and one external lash point for an ice ax, poles, or helmet.

But the new Expedition is different from its smaller siblings in more than just size. Patagonia designed the Exploration for big alpine missions and overnight trips that necessitate more gear than a typical running vest, but also require agility and comfort for long days. The pack accommodates bulky items like a small sleeping bag or bivvy, and carries moderate weight with little bounce or movement on your back, thanks to a top cinch closure paired with added elastic cords that loop into the shoulder straps to pull volume and weight close to your body.

Patagonia tapped the expertise of athletes like ultrarunner Luke Nelson to dial features in the Expedition. “I spent several years working with the designers to build this adventure vest,” Nelson told me. “I’ve used it for Tor Des Geants, multi-day running in Nepal, and dozens of adventures in the backyard. I think it is a great fusion of simplicity with just the features you need to get way out there.”

Having tested it in the Tetons and Cascades myself, I wanted to see how the Exploration would handle multi-day use and abuse, and the timing worked out to employ it on the High Route in northern Italy.

The good news is that the pack does an incredible job at the most important thing: carrying weight securely, even while running at a good clip. At one point I was hauling 15 pounds comfortably while negotiating steep switchbacks at speed. To date I’ve had zero chafing or wear issues, and often forgot how much I was carrying on my back. This is a rare feat. It’s easy to make a pack that carries a lot; it’s harder to make one that doesn’t bounce or sway while doing it. Oh, and the pack itself weighs only one pound.

The biggest downside is the design of the main compartment. It’s completely unstructured, so to stay organized, I packed my gear in stuff sacks, then put them inside the large compartment. I didn’t mind using the smaller sacks—it helped keep things organized and within reach. But what did bother me was the surprisingly narrow opening, making it cumbersome to take gear in and out (especially larger items like a camera). Another knock: while the pack comes with a weather-resistant DWR finish, the top closure doesn’t seal completely, so I often used a pack cover in heavy rain, just to be safe. These feel like obvious fixes for the next iteration.

Some of the Expedition’s finer details became noticeable over time. A perforated stiffener panel adds structure to the back, improving stability with moderate and heavy weights. The front pockets are easy to use and have enough space for snacks, full flasks, and other small essentials. Plus, I’ve found the 210-denier, 100 percent recycled ripstop nylon used for the body shell to be incredibly durable thus far, despite brushes against rocks and brambles and regularly being tossed into the corner of huts.

Overall I rank this vest-pack hybrid as one of the best in its class for its ability to carry weight much more comfortably than its competitors. This supersedes all other functionality for anyone looking to get into long alpine linkups, fast scrambles, and warm-weather fast-and-light missions.

Designed with a large hydration bladder and multiple compartments, the Duro (men’s) and Dyna (women’s) packs are great options for fast and light trail running. The best feature is the comfortable hip belt that helps take weight off your shoulders.

Another running vest meets hybrid alpine pack, the Distance was one of the first in this new category. Durable and simple, the primary downside is that it doesn’t carry heavy loads as smoothly and stably as others.

This larger, feature-heavy design helps it stand out from the Expedition and others. However, while it can carry more in the main compartment and external pockets, we found the large shape and frame harder to run quickly with.

Useful Suggestions and Strategies for Staying Secure Whereas Trad Climbing

Mike Posner on climbing Mount Everest: ‘It was utterly overwhelming’

Do not Compromise on Your Camp Mattress